The Merchant of Venice the Three Caskets

Three caskets; one of gold, one of silver, and one of lead. Three caskets are set before many suitors who all would like to take Portia of Belmont’s hand in marriage. But Portia’s father’s will states that each suitor who wishes to take Portia’s hand in marriage, must choose one of the three caskets and the one who chooses the correct casket may have the fair Portia’s hand in holy matrimony. This trial, designed by Portia’s late father, allows him to screen through his daughter, Portia’s many suitors; even after his death.

Don't use plagiarized sources. Get your custom essay on
“ The Merchant of Venice the Three Caskets ”
Get custom paper
NEW! smart matching with writer

Dashing, confident and eloquent; The Prince of Morocco was the first to first of Portia’s suitors to attempt the trial for Portia’s hand in marriage. Morocco seemed to have quite an effect on the fair Portia, “But if my father had not scanted me/…/Yourself, renowned prince, then stood as fair/As any comer I have looked on yet/For my affection.

” (II.i.17-22). Morocco’s cocky attitude and belief that he’s searching for ‘what many men desire’, he choose the casket made of gold and learns that “All that glitters is not gold.” (II.vii.73). The Prince of Morocco then leaves Portia’s Belmont Estate, a very different person from ‘The Prince of Morocco’ that we were introduced to in the beginning of Act 2 compared to the character that in being portrayed now, in this part of the play.

The arrogant, Prince of Arragon is the next suitor of Portia to take the trial of the three caskets.

The Prince entered the room in which the caskets laid and almost immediately showed no regard towards the caskets made of gold. His reasoning for not choosing the gold casket was, quote on quote, “I will not choose what many men desire,/Because I will not jump with common spirits…” (II.ix.33-34). He then selects the casket made of silver, which is inscribed with a promise, “Who chooseth me shall get as much as he/deserves.” (II.vii.8-9). So The Prince of Arragon left Belmont, much in the same way The Prince of Morocco did, a shadow of his former self.

Finally, the much anticipated Bassanio enters. Portia, who has an ever-lasting love for Bassanio, as does he for the fair Portia. Portia, frightened by the fact that Bassanio could select the wrong casket, says to him, “I pray you tarry, pause a day or two/Before you hazard, for in choosing wrong/I lose your company…” (III.ii.1-3). Bassanio acknowledges Portia’s out cry and approaches the caskets to make his selection regardless. It’s important to remember that, in the beginning of the play, Bassanio is something of a spendthrift. He had borrowed a considerable amount of money from Antonio that Shylock had loaned to Antonio so that Bassanio could voyage to Belmont from Venice to take his fair Portia’s hand in marriage. The reason that Antonio had to borrow the money from Shylock for Bassanio was because Bassanio was in too much debt for Shylock to want to loan Bassanio the money to go to Belmont. All this, briefly leads the reader to believe that upon those circumstances, Bassanio would be more drawn toward the trappings of wealth.

It seems reasonable to assume the, when it comes time for Bassanio to choose a casket; He might select one made of a precious metal. But on the contrary, when it comes time for Bassanio’s trial, he stays surprisingly quite level-headed. Bassanio’s love for Portia brought certain maturity that allowed him to realise, “Look on beauty,/And you shall see ‘tis purchased by the weight/…/thou meagre lead,/Which rather threaten’st than dost promise aught,/Thy paleness moved me more than eloquence…” (III.ii.90-109).

The trial of the three caskets, devised by Portia’s late father, does more than just ‘test the quality, ability and performance’ of each of Portia’s suitors (which is clearly the test’s original purpose); the trial also affected all of the suitors who took the trial. Trial, both literal and figurative, are amazing theatrical devices; this creates drama and gives, both the audience and the reader, the ability to empathise with, understand or even grow to despise a character.

The Merchant of Venice the Three Caskets. (2016, Mar 26). Retrieved from http://studymoose.com/the-merchant-of-venice-the-three-caskets-essay 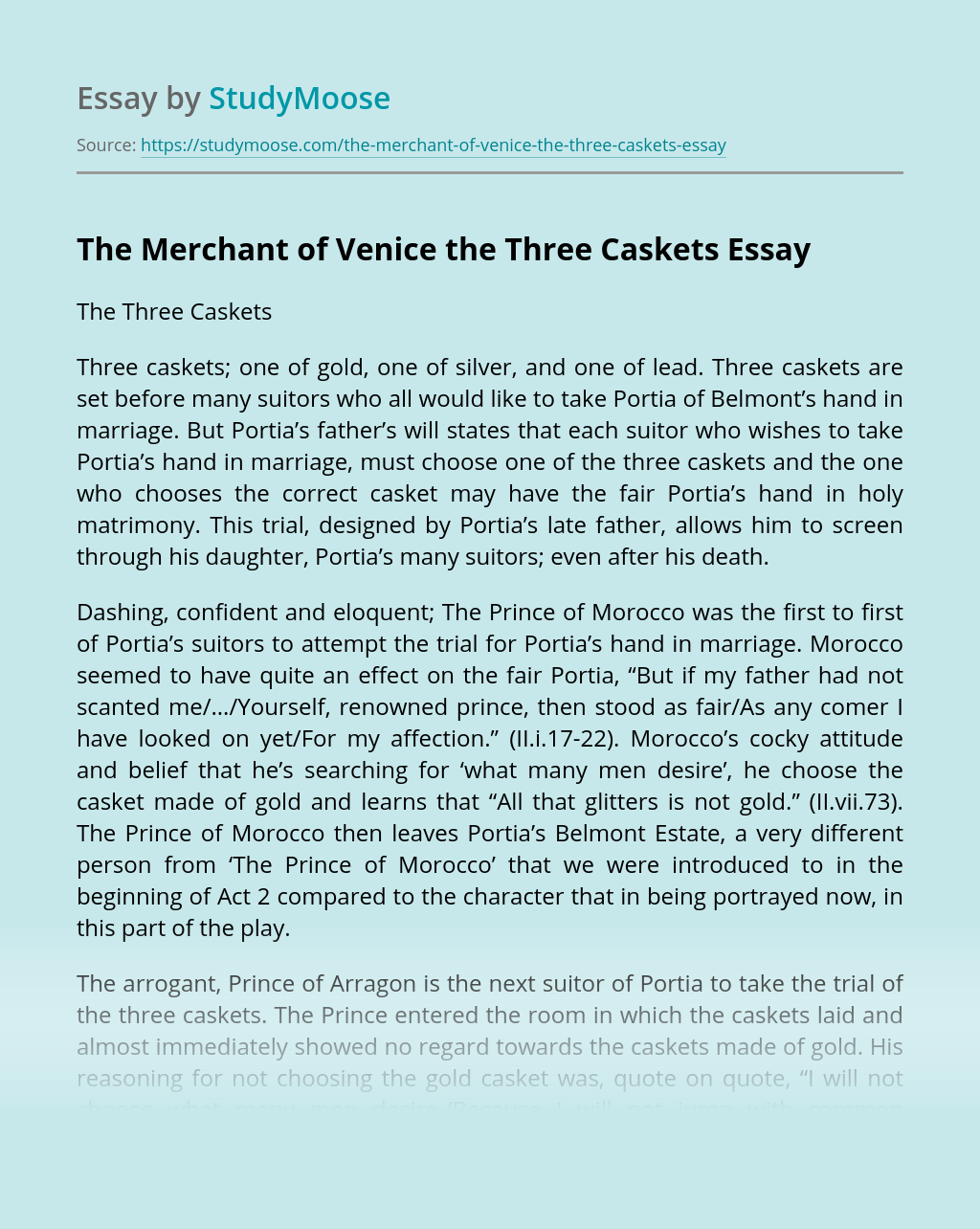