The Media and its Responsibilities

Turn in your highest-quality paper
Get a qualified writer to help you with
“ The Media and its Responsibilities ”
Get high-quality paper
NEW! AI matching with writers

I will address how each theory can help us think about what would constitute virtuous or ethical behavior, breaches in ethical behavior in the media and what are the ethical issues associated with its responsibilities to the society. In this paper I will also state issues, problems, and possible solutions on how these theories and perspectives can help or offer solutions to how media approaches society and how it needs to stay responsible in order to have a positive effect in today’s world.

The Media and its Responsibilities

When addressing the topic of media and its responsibilities to society, media is very broad and comes in different forms. When media comes to mind, it can refer to technology, mass, and personal media. the definition of media is, “the main means of mass communication and plural form of medium.” (Merriam Webster, 2014). Radio, television, magazines, and internet are all solid forms of media that society highly depend on, in fact we live in a media itself, and are products of our environment.

The purpose of media is to provide society with information, news, and entertainment. What is media responsible for? Media is responsible for giving information that is socially acceptable and ethical in terms of righteousness, and virtuous behavior.

Utilitarianism in the Media
Utilitarianism, “a doctrine that the useful is the good and that the determining consideration of right conduct should be the usefulness of its consequences.” (Merriam Webster, 2014). In this classical theory, we rely on utilitarianism to apply righteous information in the media. Utilitarianism will contribute the theory of good reliable information in media such as ethical newspaper articles, television shows, and the factual information released into society. Ethical issues involved with the utilitarian theory is that can society depend on the media to provide factual information to the public that is honest and will not cause problems within its society. As individuals, having a utilitarian mindset will help in ones daily living by being accountable for what one says to another while being held responsible for all information spoken and written. Having the ethical value of not gossiping per say, and speaking truth goes hand in hand with having a utilitarian mindset, so goes for the media and the information that it puts in society.

Deontology in the Media
Deontology, “is the normative ethical position that judges the morality of an action based on the actions adherence to a rule or rules, it is sometimes described as a “duty”, or “obligation.” (Merriam Webster, 2014). In terms of deontology and the media, as a society we rely on the media for an abundance of information if not all to keep informed about our world and the issues that are currently affecting us. An example of ethical issues associated with deontology would be the news on television. As citizens, we rely on the news to provide us with information that is morally responsible. The news, is not always as raw as we would like it to be. Rather than having all raw footage and information available, we are often provided with edited information to ease emotion and understanding. Although this sounds ethical and socially responsible, having raw information allows people to fully understand the realness in the information provided by the media. By not “sugar coating” information, it allows individuals to emotionally understand issues, problems, and concerns that are often hidden for whatever reason behind the truth. Virtue Ethics in the Media

Virtue ethics is, “initially identified as the one that emphasizes the virtues, or moral character, in contrast to the approach which emphasizes duties or rules (deontology) or that which emphasizes the consequences of actions.” (Merriam Webster, 2014). In media, it is believed that virtue in ethics is no longer portrayed. One would like to believe that media is a virtue of righteousness, and honor, however over the years, media has become so exploited and trashed that it really contains no value in any aspect. Almost all forms of media exploit humanity and exaggerate issues that society has been molded to crave gossip, fiction, and non substance information. Media in general seems to be getting worse and worse in terms of virtues and moral character.

Reality television is a perfect example of virtue ethics in the media. Reality television is the epitome of character trashing and exploitation which contain no moral character. It is a shame that the majority of human population seem to find this type of media entertaining. It is believed that society is drawn to reality television because individuals can relate to what they are watching, and reading. Common ground is the core of virtue ethics, although it has no substance, individuals feel normal when others are perhaps going through the same issues as those they see on television or whom they are reading about. What would be known for as gossip, is now known as personal relating. Relativism in the Media

Relativism is, “the belief that different things are true, and right for different people or at different times.” (Merriam Webster, 2014). Any view that maintains that the truth or falsity of statements of a certain class depends on the person making the statement or upon his circumstances or society. Living in a world with a variety of races, beliefs, morals, thoughts, opinions, religions, and so on, make relativism true. Depending on how one was raised, what religion one practices, what one understands is right and wrong, and basically what one sees as right from wrong. Every person has their own interpretation of morally correct, and morally appropriate.

What one believes is wrong, may be not be wrong to another, and with that thought, relativism comes in to play. It is hard to argue what is right and what is wrong because every person has a different point of view about every everything. Relativism in the media is frequent because of the diversity of the world in which we live. Media is not responsible for how an individual interprets what they see, feel, and believe. Media only puts out information that want the public to know, and what ever the public understands and believes is what is understood. Ethical Egoism

Ethical egoism is, “the normative ethical position that moral agents ought to do what is in their own self-interest.” (Merriam Webster, 2014). We see that in media ethical egoism is everywhere and it supplies the media with information that is selfish, egotistic, self-interest, and narcissism. What media does to the individual is poison its righteous thoughts and replace it with information and thoughts of question and negativity. This pertains to the daily news, to reality television, broadcast radio, and printed media, such as magazines, and newspapers. It is understandable that media has to do its job and provide information to the public, but the question is where does the media draw the line in terms of what is in their own “self-interest.” The media has a responsibility to the public to provide solid, substantial, and credible information.

Humans are a product of their environment, however their environment is created by the information that is given by and from the media. Thus, why one lives in a world full of social issues, rooted from a self centered, egotistic, and selfish media. In order to not become apart of this vicious cycle of media selfishness, one must always research information, and seek to find truth and understanding with every piece of information one hears. By having such a mentality, it increases ones ability to think logically and educate one self with reliable information. Emotivism in the Media

Emotivism is, ” an ethical theory that regards ethical and value judgments as expressions of feeling or attitude and prescriptions of action, rather than assertions or reports of anything.” (Merriam Webster, 2014). Emotivism focuses mainly on reactions rather than statements. Media today seems to have an abundance of emotivism. The shows one watches and the magazines one reads is not what it really seems. For example, when one watches the news, we often see people get emotional on television, or when actors or actresses play roles in movies, they often make it seem that they are genuinely emotional, but really are just faking for media purposes.

Generally, the majority of what is seen on television is either exaggerated, or role played for viewing entertainment, and with that said it brings up the issue of breaching ethical behavior. If one knows its is wrong to act a certain way, where is the ethical value and morale of being a responsible indivisible in society? It is unfortunate that society is slowly losing its ability to think on its own. Society is molded to the norms that the media has painted for them, and what society has adapted to as appropriate. Living in a world where society follows trends and popularity and not what is real is scarce. Media no longer keeps in mind the society, but rather what makes ratings, sells, and brings profit. Media and its Responsibilities

In today’s media, newspapers, magazines, television, technology, and so on, only have three major roles in what they are trying to accomplish. Media acts as a mirror of society to inform the people. Media bridges communication gaps between different sections of society and critically analyzes public policies, and social and cultural issues. With the growing technology media will only increase and the booming of social media will take over society year after year. With these classical ethical theories and perspectives, it shows individuals the different levels of thought and understanding when it comes to today’s media and the effects it can have on that thought process. Conclusion

In conclusion, one learns that the media and its responsibilities to society is greatly decreasing year after year and the substance contained with that media is becoming more and more exploited. In order to maintain ethical and moral understanding one must fully educate oneself to obtain higher understanding in what is right and wrong . One must also find common ground through the classical ethical theories and perspectives addressed in this paper in order survive through the norms of the media. Media no longer finds responsibility in educating society, but simply to make money.

The Media and its Responsibilities. (2016, Mar 28). Retrieved from http://studymoose.com/the-media-and-its-responsibilities-essay 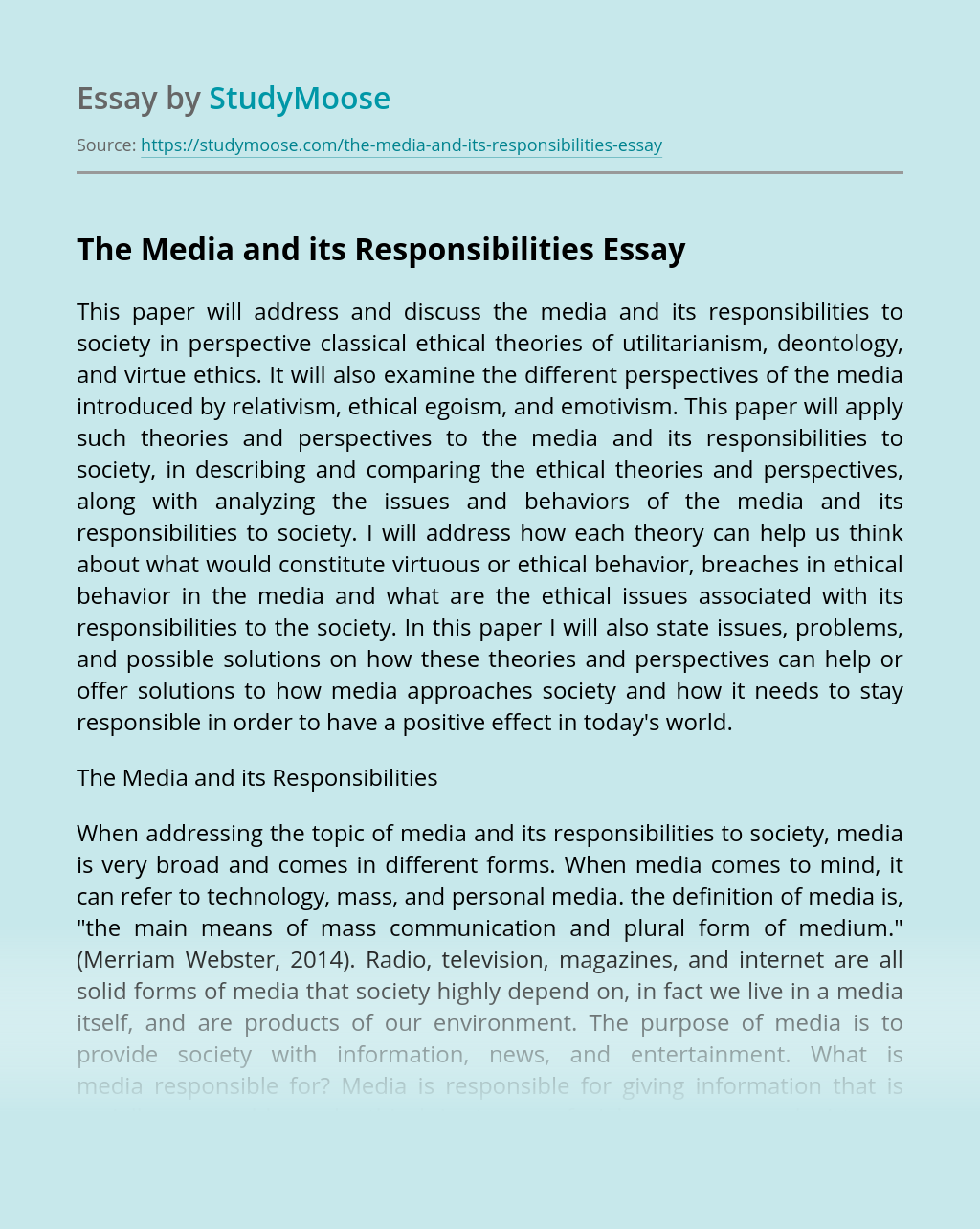 Turn in your highest-quality paper
Get a qualified writer to help you with
“ The Media and its Responsibilities ”
Get high-quality paper
Helping students since 2015
Stay Safe, Stay Original