On August 10, 1969 the headline “Actress Is Among 5 Slain at Home in Beverly Hills” appeared on the front page of the New York Times (Roberts). This was the beginning of a investigation of police error which prolonged the arrest of Charles Manson. There were several people who claimed they had heard gunshots and screaming in the early morning hours of August 9. Mrs. Kott, who lived at 10070 Cielo Drive, heard three or four gunshots at what she guessed was to be about twelve thirty to one o’clock a.

Don't use plagiarized sources. Get your custom essay on
“ The Manson Investigation ”
Get custom paper
NEW! smart matching with writer

m. after which she heard nothing. About three quarters of a mile south of the murder scene, Tim Ireland was having an over night party at the camp of which he was a counselor.

Everyone had gone to bed when Tim awoke to a man’s voice screaming “Oh, God, no, please don’t! Oh God, no, don’t, don’t, don’t…” (Bugliosi & Gentry 4). At this time, about twelve forty a.m., he awoke his supervisor, told him about the scream, and requested that he go see if anyone needed help. He drove around the area but saw nothing unusual. Robert Bullington of the Bel Air Patrol was in his parked car when he heard three gunshots spaced a few seconds apart. He immediately called in to headquarters (the call logged in at 4:11 a.m.).

Headquarters then called in to LAPD but nothing further was done. About four thirty paperboy Steve Shannon, who hadn’t heard anything the previous night, noticed what looked like a telephone wire hanging over the front gate and a bug light on near the house.

Mr. Kott also noticed the wire when he went out to get his paper at about seven thirty that morning (Bugliosi ; Gentry 4-5). Winifred Chapman, the housekeeper for 10050 Cielo Drive, arrived at the house and also noticed the wire hanging at the gate. She first thought the power was out but then she pushed the button to open the front gate and it did. She began to walk up the driveway when she noticed that there was an unfamiliar automobile in the driveway. She figured, though, that it was only a visitor and continued toward the house. When she entered, she picked up the phone and the line was dead. Thinking she should inform someone, she entered the living room where she noticed two blue trunks which were not there when she left the previous night.

A closer look saw that there was blood on the trunks. There was blood scattered about in the living room. She could see out the back door and on the ground there were pools of blood and a body on the lawn. She ran out of the house in a panic and on her way out she passed the unfamiliar automobile in the driveway and this time, looking inside, saw yet another body (Bugliosi ; Gentry 5). She ran from the estate screaming “Murder Death Bodies Blood” (Begg ; Fido 134). Knowing she needed to get help she ran immediately to 10070 Cielo Drive and began banging on the door but Mr. and Mrs. Kott did not answer. She then went to 10090 Cielo Drive and began banging on their door. Mr. and Mrs. Asin came to the door and let her in. She was in complete hysterics and the Asin’s didn’t know what to do. Jim Asin, 15, called the police and noted the time, eight thirty-three a.m.

Jim and his father Ray went to the crime scene and stood at the gate. they noticed a white Rambler in the driveway and also noticed that there were wires cut. They then returned and made a second call to the police and, shortly after, a third call (Bugliosi ; Gentry 6). Police error begins with phone calls. The first being the one that was made to the LAPD in connection with the gunshots heard early on the morning of August 9. The police didn’t follow up on anything concerning that call. As for the calls made by Jim Asin, in the official report it says that at “0914 hours, West Los Angeles Units 8L5 and 8L62 were given a radio call ‘Code 2 possible homicide,10050 Cielo Drive'” (Bugliosi & Gentry 6).

“The confusion extends to the arrival times of the units. Officer DeRosa would later testify he arrived about 9:05 a.m., which was before he supposedly received the Code 2. Officer Whisenhunt, who came next, set the time of his arrival at between 9:15 and 9:25, while officer Burbrige, who arrived after both men, testified he was there at 8:40 (Bugliosi & Gentry 6). Officer DeRosa, who was driving 8L5, had arrived first and began interviewing Mrs. Chapman but she was too hysterical and only mentioned names- Polanski, Altobelli, and Frykowski. Ray Asin cleared things up for DeRosa. He said the house was owned by Rudi Altobelli who was in Europe. Altobelli had hired a caretaker, a young William Garretson, to watch the house. He lived in the guest house just behind the residence. Altobelli rented the house itself out to Roman Polanski and his wife Sharo 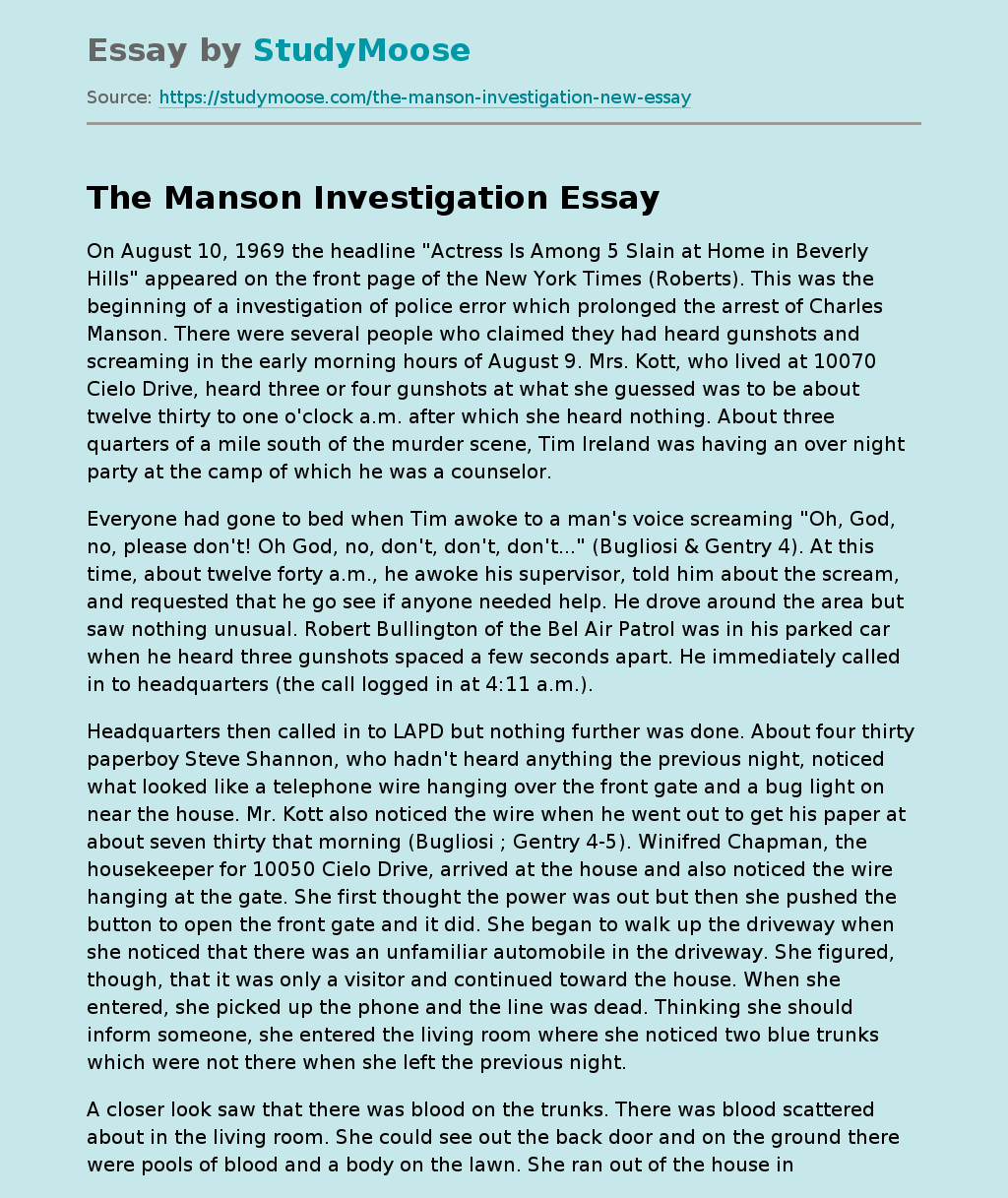