The Man Who Loved Flowers by Stephen King

Why do people feel like killing another human being? And what are they telling themselves to make it okay? In our world today there are a lot of murders. Many of the killers are convicted for their crimes then there are also some of them who manage to slip away from the police and the investigation but then come the hardest sentence of them all. You will have to live whit the guilt of what you have done for the rest of your life because you cannot tell anybody.

Don't use plagiarized sources. Get your custom essay on
“ The Man Who Loved Flowers by Stephen King ”
Get custom paper
NEW! smart matching with writer

The main character in the story “The Man Who Loves Flowers” by Stephen King from 1977, acts like it is no big deal maybe his greatest regret is that he will never see his one true love, Norma, again.

The main character is a young man, who appears to be in love. He wears a grey suit and a tie that is pulled down a little. His eyes are light blue and his hair is brown and cut short.

He is plain looking, but because he is in love, people on the street think he is beautiful. We are told he is on his way to meet his girl Norma, and it all sounds very romantic. In the beginning the story is sweet, it is really romantic. Especially in the line “The air was soft and beautiful, the sky was darkening by slow degrees from blue to the calm and lovely violet of dusk” (p.175, ll.2-4) In this sentence there is a complete love story, and you expect something lovely to happen later in the story.

There are told about all those little shops, and all those happy people, the reason there are giving, is that it is spring time and everyone is in love. But the story does not continue that way in the line “It was getting darker now … could he have been mistaken?” (p.179, ll.41-42) the story is completely devoid of painting words, and beautiful scenes.

He has gone into a narrow lane with garbage cans to meet whit his girlfriend whom he brings flowers. One starts to fell the creeps, and you know the story cannot end well. Maybe the main character is schizophrenic in the line “His name was love, and he walked these dark streets because Norma was waiting for him. And he would find him. Some day soon” (p.180,ll.24-25) this line is from just after he killed the young girl that looked like Norma but he does not care that he had just taken another life. He is only looking forward to when he is going to meet his dead girlfriend, whom he still thinks he loves. He knows it is wrong because when he kills her he makes sure that she does not scream, and he does it in a dark alley so no one knows or sees it.

It really is like the main character has to personalities, one that is bright and in love with his dream girl Norma, the girl he hopes to meet soon, it is the one he shows to the rest of the world and it makes everybody think he is beautiful. The other is dark, the personality of a murderer who kills just because the girl he frightens screams, like Norma did when she was killed, in the same alley. The title of the story is The Man Who Loved Flowers, which when you read it makes sure that one puts particular attention to the florist and you think about the flower bouquet the whole time, and especially in the line “…the spill of flowers fell out of his hand, the spill spilled and broke open, spilling red, white, and yellow tea roses beside the dented trash cans…” (p.180,ll.8-10), where you take notice to the tea roses that seems so out of place, in the dark alley with a serial killer.

It is opposite to the beginning where the roses seem so perfectly in place with a happy man there is on his way to meet his girlfriend. The flowers in this story highlights the transition from beautiful spring evening where you could think a man in love would by his girlfriend flowers, to a dark alley with garbage cans where one could never imagine a pretty bouquet.

Maybe the main character, who calls himself love, kills only to feel some excitement in his life again and he tells himself that it is okay because he is just looking for Norma, whom he will find someday, eventually.

The Man Who Loved Flowers by Stephen King. (2016, Jun 13). Retrieved from https://studymoose.com/the-man-who-loved-flowers-by-stephen-king-essay 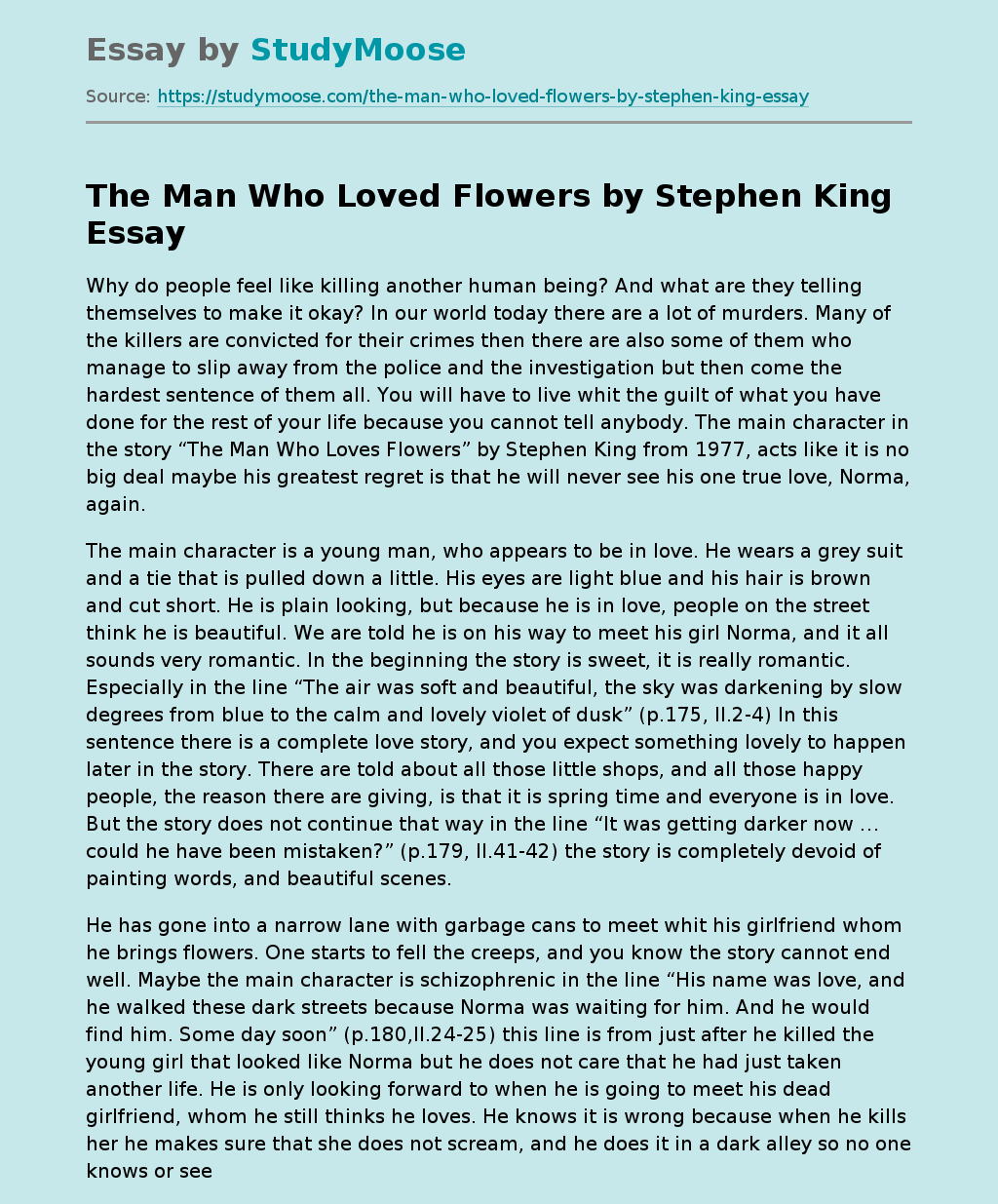