Don't use plagiarized sources. Get your custom essay on
“ The Male Reproductive System: Organs, Function, and More ”
Get custom paper
NEW! smart matching with writer

The testes are the male gonads. They are usually in a pair. The job of the testes or they can be called testicles is to produce sperm. Upon ejaculation, the male sperm can release four million sperm cells in just one ejaculation.

The ductus deferens are tubes that carry sperm from the epididymis to the ejaculatory duct.

The epididymis is a tiny coiled mass of thin tubes and it carries sperm from the testes to the ductus deferens.

The penis is the sex organ of the male.

It contains the opening of the urethra, which is used for the release of urine and for the sperm to be released. The penis increases in size during sexual stimulation. The penis erection helps to get the sperm deeper within the female reproductive tract.

The prostate is the size of a walnut that keeps growing throughout a man’s lifetime. When it gets too big it can cause problems. The big prostate can get in the way of the urethra and not allow the urine to come out of the penis.

The prostate contributes to the production of ejaculation of semen during sexual intercourse.

The seminal vesicles are the sacs where the seminal fluids are stored. The urethra is a tube in the penis that allows urine and sperm to be released to the outside of the body.

When it’s a problem with the testes it can lead to hormonal imbalances, sexual problems, and infertility. When the epididymis is inflamed it’s called epididymitis. This is usually caused by an infection, like a sexually transmitted disease like chlamydia. Priapism is a painful erection and is the most common condition of the penis. It can last up to more than four hours. Plaque, or hard lumps, form in the penis and it causes it to bend or curve. Men over the age of fifty can have problems with their prostate glands. The prostate gland can get bigger with age and can cause all kinds of problems. Often times it’s (BPH) benign prostatic hyperplasia. Sometimes the seminal vesicle can swell on a male it is called seminal vesiculitis is a common disease of the male urogenital tract. The urethras can have problems that would be painful for the male because he would have a problem with passing urine. It would be painful for the male depending on what is wrong with the male treatment in the doctor’s office or surgery can be needed.

The organs of the male reproductive system are specialized in these following function to produce and maintain sperm, protect fluid, discharge sperm and sexual intercourse activities and produce and secrete hormones. The male reproductive system is very unique with its internal and external features. The majority of the male’s reproductive system is located externally from the body. Located in the abdominal cavity also known as the pelvis region. The penis is the male organ used for sexual intercourse. The body of the penis is made up of three internal chambers made up of special sponge-like erectile tissue. This tissue contains millions of spaces that fill with blood when sexually aroused, causing the penis to become erect. The skin of the penis is loose during sexual intercourse or activity. 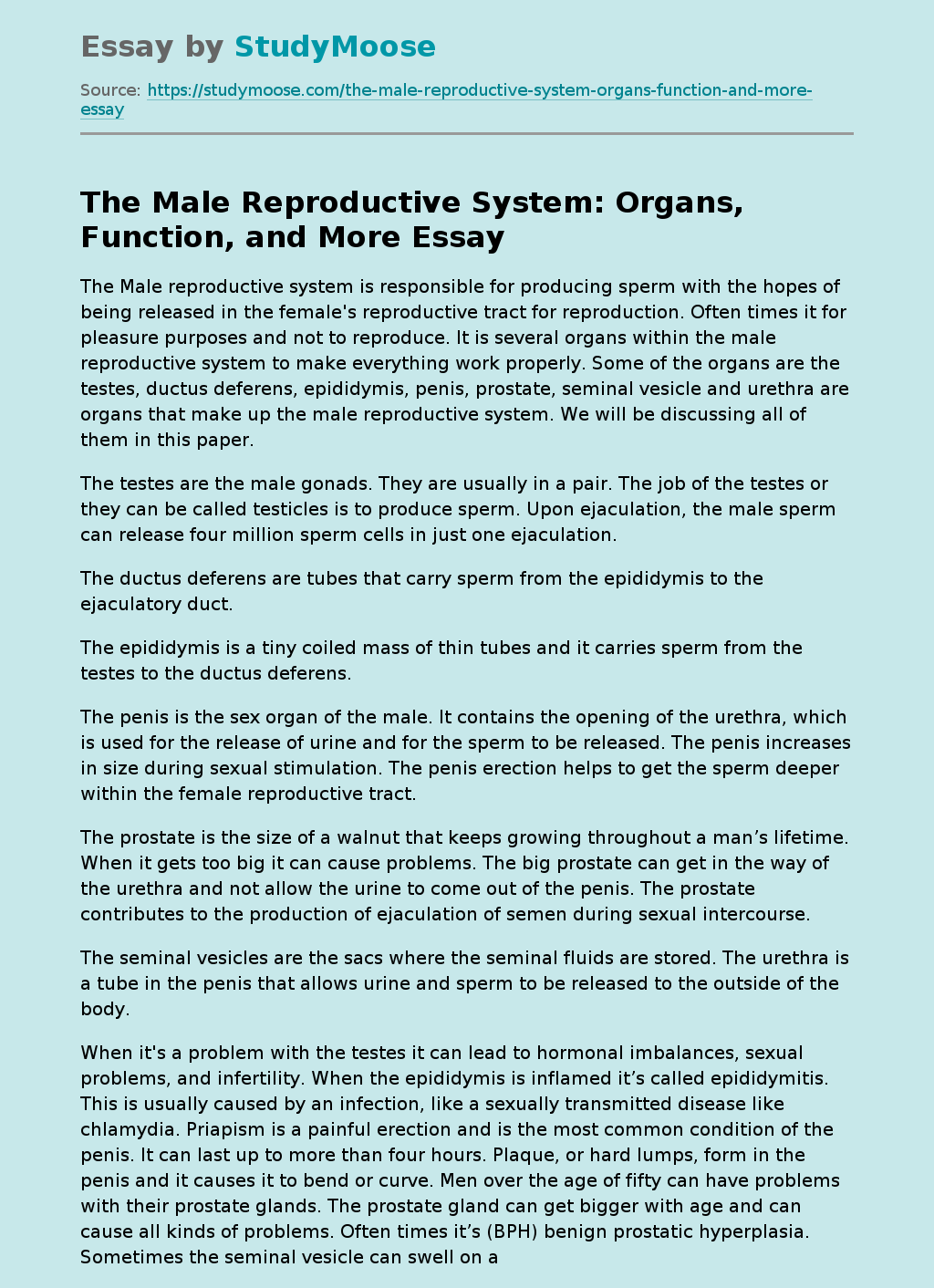