Seeing that I live in South Lawrence, MA I thought it would be interesting to analyze this case. I also bring a perspective to this paper as I, like Aaron Feuerstein, am “a strongly religious man” (Nohria and Piper 1-10). The difference there is that he is Jewish, like half of my wife’s family and I am a Christian (reformed Presbyterian to be exact). Thanks to my father-in-law’s extended family, I have some insight into the feeling of social responsibility of the Jewish faith.

Don't use plagiarized sources. Get your custom essay on
“ The Malden Mills case ”
Get custom paper
NEW! smart matching with writer

They tend to be loyal to both family and their community, which may explain some of Feuerstein’s behavior or decision making.

The facts of this case are as follows. During the second shift on December 11, 1995 a fire erupted on the Flock department, eventually leading to a fire in the boiler room which led to the rest of the building going up in flames and in two hours, the building collapsed. In total, 24 employees were injured and of those, nine were severely injured.

This led to a Chapter 11 bankruptcy filing in November 2001, the second time he had to file for Chapter 11 in his lifetime; the previous time was back in 1981 when fake fur went out of fashion.

Some of the decisions that were made were as follows. The day after the fire, Feuerstein decided, based upon the assurance of the insurance payout that they would continue to pay all 3,100 of their employee’s full pay, including benefits, for 90 days.

Feuerstein decided to rebuild everything, but not only that, they decided to buy top notch equipment. That he would use this negative situation and turn it into something positive for the company going forward. He saw it as an opportunity that they probably would not have if the fire didn’t occur. Not only did he decide to rebuild, but he decided to rebuild in the current location rather than overseas like a lot of other textile mills have been doing or at their other locations in Vermont, New Hampshire and Maine.

The major issue they faced was the insurance money they thought they were getting, approximately $302 million, but up to February of 1996, they only received $9 million. This forced them to begin to borrow money and seek out aid. Because their situation became so publicized, then President Clinton had mentioned Malden Mills in his 1996 State of the Union address. This notoriety also brought about state and federal tax breaks for the Mills. All of which, along with the production of the non-affected buildings, plants & product lines, helped them to stay afloat until they filed bankruptcy once again in November of 2001.

Feuerstein also decided to spend far more than what the insurance would cover on better equipment. Other issues or red flag were the number of his managers that were not on board with his rebuilding plans. Feuerstein said that he rejected these ideas because he felt that he owed it to his employees and the community to rebuild there. He also refused to automate processes due to his loyalty to his employees and his opinion that automation lacks a personal touch that separates Malden Mills from some of their competitors.

Concerning Feuerstein’s feelings toward the community, Malden Mills was by far the biggest textile mill in the region and it was vital to the economy of the city of Lawrence. Why you might ask? Well, Lawrence at the time was the 24th poorest city in the US with the average income per capita was $12,000/year. Additionally, community in the Jewish faith is not something to be taken lightly. They take great pride in their standing in the community. This commitment to one’s community may have been a determining factor in Feuerstein’s decision not to abandon the city or his employees that lived there.

His three top priorities were know to be his desire to get the Polartec and Woven lines operational once again, to rebuild the Flock operation even though it was their least profitable product line, and to support his workforce. To that last point, Feuerstein maintained a program that was designed to help employees buy their first homes. When talking about this home assistance program he was quoted as saying, “I will do everything in my power to help Lawrence be restored to its pristine glory. ” (Nohria and Piper 1-10) In the end, Feuerstein lost his controlling interest during the 2001 bankruptcy.

In my opinion he should have taken a phased approach to his rebuilding plan if he was so determined to rebuild everything, especially with the upgraded equipment and the slow returns of the insurance funds. I would have been inclined to pay the employees through the holidays and do so with full benefits, but not for 90 days, not without the insurance money in hand. His motives were commendable, but unrealistic and extreme. I do agree with his position on automation, the personal touch did seem to make the difference in the end.

I do think that they could have rebuilt more successfully if they relocated some of the work closer to the plants in the northern New England states, but I would have only done so to bring like divisions closer together. Like in the case of the Polartec division which was split between Main and Lawrence. (Nohria and Piper 1-10) Overall, I think that Feuerstein could have kept his position in the company if they had better insurance; a payback of only $9M after being assured $302M is unjustified. He also could have toned down his approach and been more patience.

Sure the rebuilding process would have taken longer, but it would have ensured that it was done right and the company could have overseen the process, allowing them to see the progress and not be so rushed. In his haste, Feuerstein made poor decisions that were motivated more from the heart rather than from a solid and trustworthy business strategy. His heart was in the right place and he made some tough decisions for good reasons, but at the same time, made other, more costly mistakes that could have been avoided. 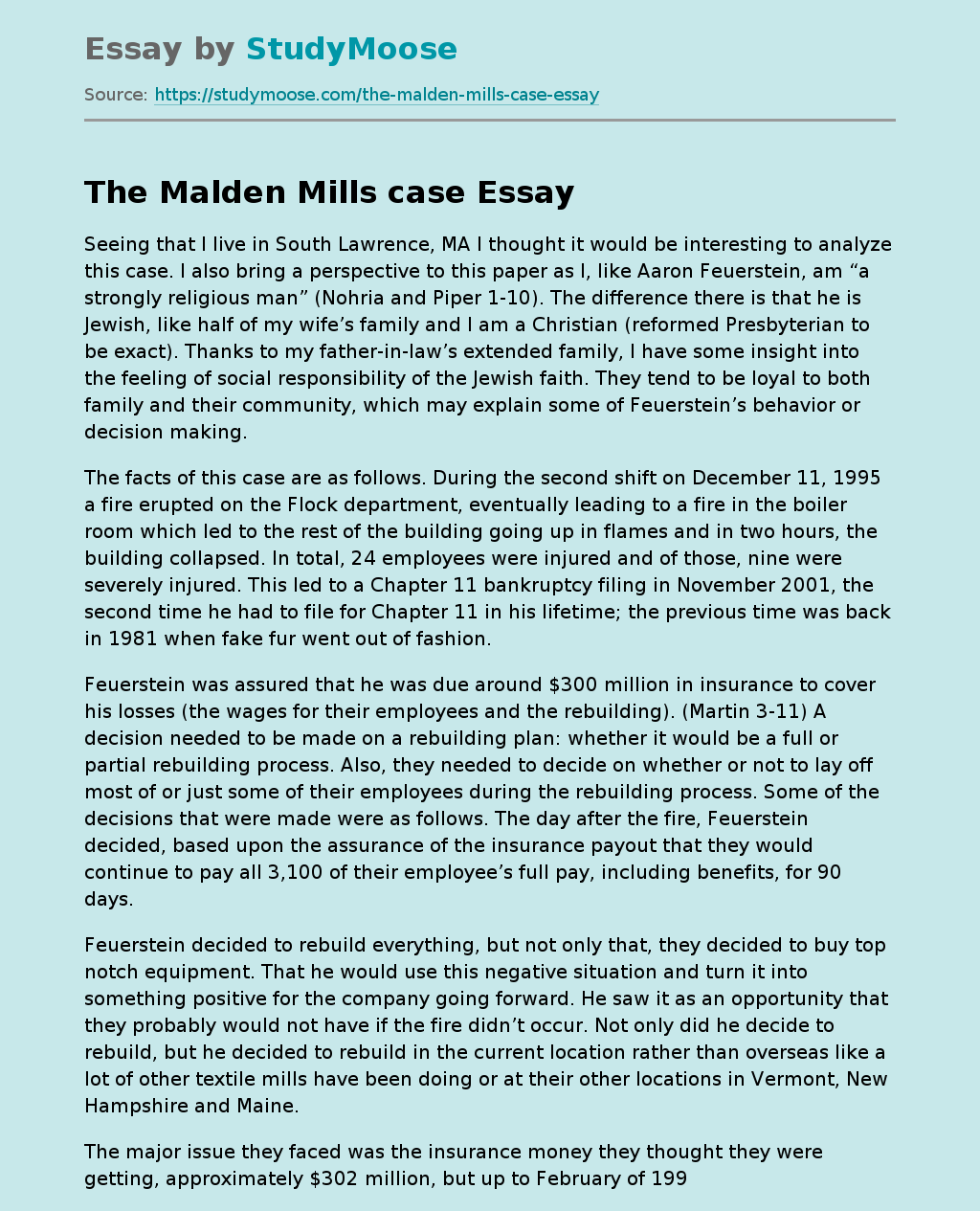