The Love Story "Romeo and Juliet"

The story of Romeo and Juliet has a compressed timeline of four to five days. They met on a Sunday at a party at Juliet’s and fell in love, making plans to marry the next day. On Monday night, they married in Juliet’s room. Shortly, after Romeo was exiled from Verona, because he killed Tybalt, one of Juliet’s cousins. The next day, Tuesday, Romeo left. He went to Mantua for his exile. Once Juliet realized she still must marry Paris, she faked her death by drinking ‘poison’ that put her into a deep sleep.

Don't use plagiarized sources. Get your custom essay on
“ The Love Story “Romeo and Juliet” ”
Get custom paper
NEW! smart matching with writer

Wednesday, Juliet’s fake death is discovered. Shortly after, Romeo finds out that Juliet is supposedly dead, and commits suicide. On Thursday, Juliet wakes up to find Romeo dead. She grabs his dagger and stabs herself. The Montagues and the Capulet families find out about their children’s death. As a result, the feud between their families ends.

Romeo and Juliet affected societal norms in the story because their community, Capulet and Montique families were shocked because it is unusual that arranged marriages are affected.

Romeo and Juliet differentiated from societal norms in the story, their families despite their feud, ended up resolving it following their children’s death. They did not think that Juliet would cheat on Paris, the guy that Juliet had her arranged marriage with. Juliet was betrothed to another person, but she still made the choice to sneak around and see Romeo. The events that happened over months, Shakespeare shrank into four days.

Romeo betrayed his family by going to the Capulet’s party to find out who Juliet was. This was around the time where arranged marriages were made. By Juliet seeing Romeo, it was considered cheating, because her arranged marriage was set.

This timeline is compressed into a play. This timeline affects the play because the story gets to the end rapidly. These events happened within a long period of time. The play was so successful because the play was different because they had arranged marriages and no one has pulled away from the lifestyles that their community was used to in this time period. If everything that happened in very large detail was put into the play, it would not be as popular as it is today, because it would be uninteresting to most of the audience.

Romeo started out the play heartbroken by Rosaline. One could think that Romeo was looking for something to keep his mind off Rosaline. He went to the Capulet’s Masquerade ball and saw Juliet. One supposes that Romeo and Juliet were not being rebellious in the beginning when Romeo and Juliet saw each other. They did not know who each other were when they met. Romeo might have had the idea of Juliet being a rebound from Rosaline. Romeo had a tendency to like people for their looks instead of actually getting to know them. When they did find out who they were, they fell in love and wanted to be together even more than before. They wanted to be rebellious because they were teenagers. One would think that over time, Romeo and Juliet did fall in love, but not at first sight. Some believe that you cannot fall in love that quickly because you do not know the person well enough or, that because the story actually happened in numerous months, when not compressed into four days, Romeo and Juliet did fall in love.

One might say that this play is unrealistic. They would say this because of the fact that because of the compressed timeline of four days, an individual can never have time to truly get to know somebody. An individual needs more than four days. an individual might be able to fall in love with someone’s appearance in four days possibly, but not with the person. One might believe that Romeo and Juliet were not actually in love, but it was infatuation, and they had just thought that they were in love. Another part that is unrealistic is the fact that when the play starts, Romeo is going through a heartbreak. He moves on very quickly to Juliet. The way that he was dealing with the breakup was very dramatic. He tended to like someone based on looks rather than personality, and one might think that Juliet is not old enough to understand or know that. This also could be realistic for the time that the play Romeo and Juliet was based on, but one still might think that it is realistic. Another unrealistic part is the fact that after Romeo killed Tybalt, Juliet’s cousin, Juliet still went to Romeo. This is unrealistic because Romeo, the guy that Juliet claims to love, had just murdered someone in her family.

The Love Story "Romeo and Juliet". (2016, Jun 25). Retrieved from https://studymoose.com/the-love-story-romeo-and-juliet-essay 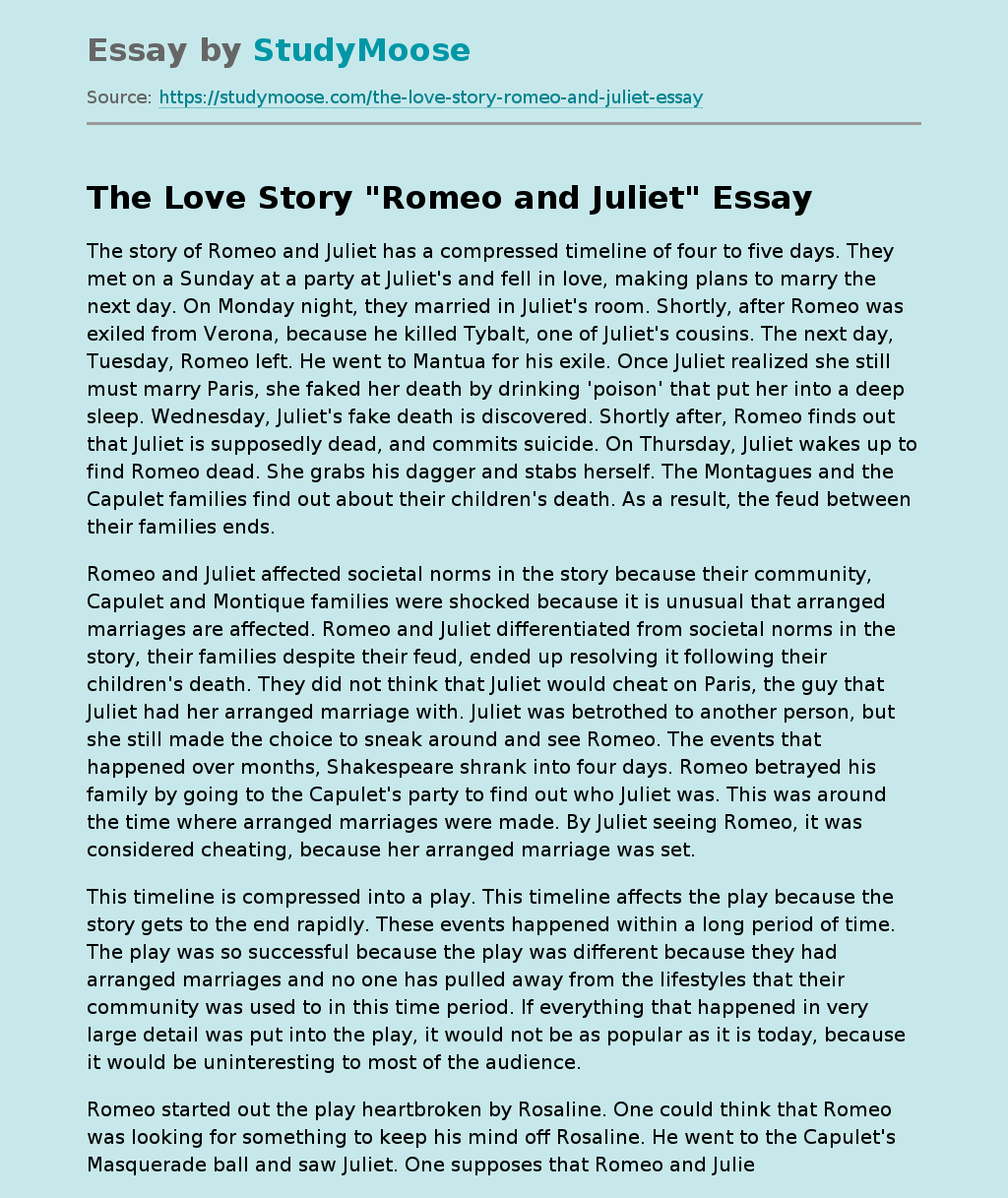