“The Lottery Ticket” A look at the concept of vulnerability in attitude change.

When reading the short story, “A Lottery Ticket,” by Anton Pavlovich Chekhov, drastic and fast changes in attitude can be seen in the main character, Ivan Dmitich. These changes are a clear window through which one may understand and observe Ivan’s character and values as a person. The author of the story makes these changes, regarding Ivan’s spouse and lifestyle, easy to see by the writing techniques he employs in order to build suspense as to where the story is going, and curiosity in the fate of Ivan and his wife.

Turn in your highest-quality paper
Get a qualified writer to help you with
“ “The Lottery Ticket” A look at the concept of vulnerability in attitude change. ”
Get high-quality paper
NEW! AI matching with writer

We can see how the concept of vulnerability in Ivan is also shown clearly by his attitudes towards the end of the story.

The story does not begin with any hint of vulnerability in Ivan’s personality. He is quite content with his middle-class lifestyle. The author proves this by writing,“Ivan Dmitrich, a middle-class man who lived with his family on the income of twelve hundred a year and was very well satisfied with his lot, sat down on the sofa after supper and…” (Chekhov 476).

The first small change in his seemingly laid back, relaxed demeanor was after his wife asked him to tell her the winning numbers of the lottery that week.

He turns slightly cold and skeptical towards his wife for even getting a ticket, but since he had nothing to do, he checked the numbers for her. All of these content feelings immediately disappeared when Ivan realized that they had the same series number as the winning ticket.

At this point in the story, the tone quickly changes from relaxed and content to paced, fast, and excited. He tells his wife in quick, fast words that they have the winning series, but tells her to “wait a little, as we have plenty of time to be disappointed.” (Checkhov 476) From here he goes on a wild train of thought imagining the many exotic and exciting things he would do if they had actually won that ticket.

However, his conversation, talking about buying an estate, paying debts, and going traveling is quite one-sided. Eventually Ivan’s wife does join in, to support his spending ideas, until she begins to see the change in her husband from a once relaxed, satisfied man to a man slowly letting the power of money take hold of him, money that was not even his. The money was hers. The happiness they once had with one another began to slowly fade away as resentment and frustration towards one another moved in to replace it. Ivan’s attitude here begins to change quite dramatically.

The dramatic attitude change begins with these words,“She would only be in my way, she would begrudge me every farthing…She knows nothing about money, and so she is stingy. If she won it she would give me a hundred roubles and put the rest away under lock and key…” (Chekhov, 477,478) These are the thoughts of Ivan as he begins to feel bitter towards his wife regarding the money, not even won yet. She starts to realize his feelings towards her.

Ivan begins to look at her relatives as “oily, hypocritical beggars, wretched, detestable people” (Chekhov, 477) who would come crawling to them as soon as they won the money. It can be easily seen how Ivan’s true character and attitude comes out at the thought of sudden riches. His feeling of vulnerability is also expressed here.

Ivan begins to feel vulnerable towards his wife. To him, money equaled power. “That’s not money, but power, capital!” (Checkhov, 476) He starts to realize, after his dreams, that the ticket was, in fact, his wife’s. Therefore, in his mind, his wife had power over him. She had the money, and could keep it, give it to whom she wanted, and do what she wanted with it. Ivan did not like this feeling of vulnerability, and this is what sparks the resentment towards his wife. He started to realize that “she had grown elderly and plain, and that she was saturated through and through with the smell of cooking, while he was still young, and healthy, and might well have got married again.” (Checkhov 478) Ivan’s real personality emerged completely by this point and so comes the climax of the story.

The climax occurs when Ivan’s hatred and feelings of vulnerability come to an apex, and he wants to dash his wife’s dreams to the ground. He pulls out the paper and “read out triumphantly” (Checkhov 479) that they did not have the right ticket. The author immediately changes the tense, angry tone of the story to one of depression and despair. Ivan’s hatred and hope disappears and he begins to realize the reality of his life. The author sets this tone by describing the dark, low pitched rooms, the supper they had ate was not doing them good, and the evenings were long and wearisome. At this point Ivan loses his calm completely and ejaculates a declaration of despair. “Damnation take my soul entirely! I shall go and hang myself on the first aspen tree!” (Checkhov 479)

Through Ivan’s feeling of despair, hatred, and vulnerability to his wife’s “power” over him, although nothing had changed in his life financially, he had successfully damaged his relationship with his wife, and she had seen his true character. Ivan’s vulnerability and attitude was his major downfall in the end of the story. The author’s use of wording and plot pace enforces the reader’s perception of Ivan’s attitude change and eventual downfall. In summary, one can easily follow the various changing attitudes of Ivan, and his overall vulnerability.

“The Lottery Ticket” A look at the concept of vulnerability in attitude change.. (2016, Apr 29). Retrieved from https://studymoose.com/the-lottery-ticket-a-look-at-the-concept-of-vulnerability-in-attitude-change-essay 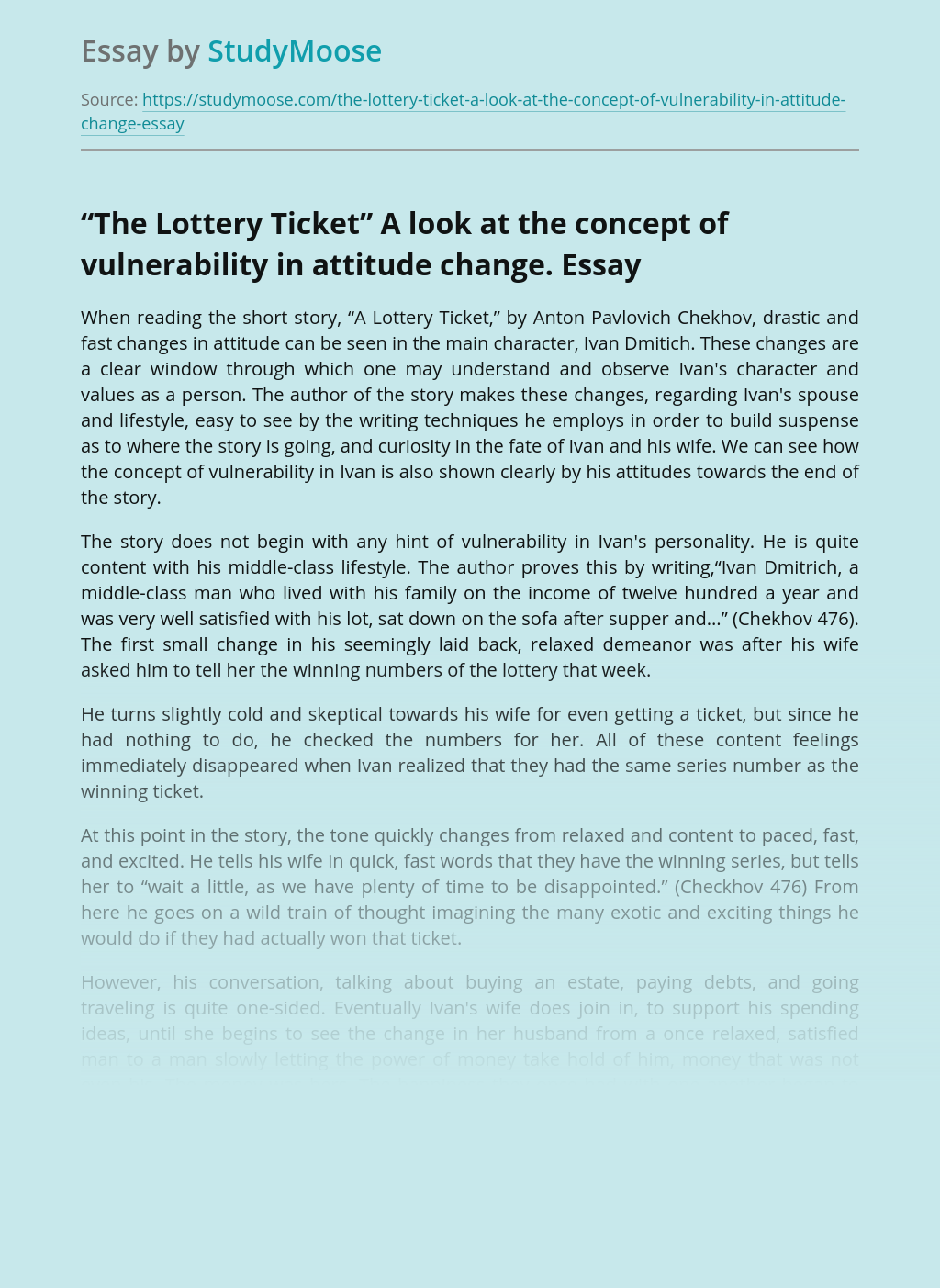 Turn in your highest-quality paper
Get a qualified writer to help you with
“ “The Lottery Ticket” A look at the concept of vulnerability in attitude change. ”
Get high-quality paper
Helping students since 2015
Stay Safe, Stay Original