The Lost City of Nan Madol

Legends of lost cities like Atlantis and El Dorado have always fascinated mankind throughout the centuries, because of their mystery. But off the coast of Micronesia lies a real mysterious city called Nan Madol. Nan Madol is a ruined city that lies off the eastern shore of the island of Pohnpei that was the capital of the Saudeleur dynasty until about 1628. It is in the present day Madolenihmw district of Pohnpei state, in the Federated States of Micronesia, my home land, in the western Pacific Ocean.

Don't use plagiarized sources. Get your custom essay on
“ The Lost City of Nan Madol ”
Get custom paper
NEW! smart matching with writer

The city consists of a series of small artificial islands linked by a network of canals.

I did not know much about Nan Madol so I had to ask the one person I knew would really help me. That person was my grandfather, Bethwel Henry. I had to ask how the people back did then come up with the name Nan Madol. He said that Nan Madol means “spaces between” and is a reference of the canals that crisscross the ruins.

It is often called “The Venus of the Pacific”. “According to Pohnpeian legend” he said, “Nan Madol was constructed by twin sorcerers Olisihpa and Olosohpa”. The brothers arrived in a large canoe seeking a place to build an altar so that they could worship Nahnisohn Sahpw, the god of agriculture.

After several false starts, the two brothers successfully built an altar at off Temwen Island, where they performed their rituals. In legend, these brothers levitated the huge stones with the aid of a flying dragon.

When Olisihpa died of old age, Olosohpa became the first Saudeleur (ruler) of Nan Madol. Olosohpa married a local woman and sired twelve generations, producing sixteen other Saudeleur rulers. The founders of the dynasty ruled kindly, though their successors placed ever increasing demands on their subjects.

Their reign ended with the invasion by Isokelekel, who also resided at Nan Madol, though his successors abandoned the site. On Nan Madol there is no fresh water or food; water must be collected and food grown inland. During Saudeleur rule, Pohnpeians brought essential food and water by boat. The Saudeleur received food at a particular islet. Around 1628, when Isokelekel overthrew the Saudeleurs and began the Nahnmwarki (King) Era, the Nahnmwarkis lived at Nan Madol, but had to gather their own water and grow their own food.

This is thought to have caused them eventually to abandon Nan Madol and move back to their own districts. Before the outbreak of World War II, the Japanese administered the strange island. The Japanese investigated a Nan Madol legend that referred to corpse resting in the “House of Dead” , and allegedly their divers discovered an underwater structure containing elaborate watertight coffins made of pure platinum. Records indicating that how much of the platinum may have been removed by the Japanese, or if any platinum watertight coffins still exist, has been either hidden away or destroyed by the Japanese.

Archeologists have uncovered human bones that belonged to people considerably larger than the Pohnpeians who lived today. Today Nan Madol forms an archaeological district covering more than 18 square kilometers and includes the stone architecture built up on a coral reef flat along the shore of Temwen Island, several other artificial islets, and the adjacent Pohnpei main island coastline. The site core with its stone walls encloses an area approximately 1. 5 km long by 0. 5 km wide and it contains nearly 100 artificial islets bordered by tidal canals.

Carbon dating indicates that the construction of Nan Madol began around 1200 CE, while archaeological site show that the area may have been occupied as early as 200 BCE. Some probable diggings sites around the island have been identified, but the exact origin of the stones of Nan Madol is yet undetermined. None of the proposed diggings sites exist in Madolenihmw, meaning that the stones must have been transported to their current location. It has been suggested that they might have been floated through raft from the diggings, and a short dive between the island and the diggings shows a trail of dropped stones.

However, no one has successfully demonstrated or explained the process. Some modern Pohnpeians believe the stones were flown to the island by use of black magic. In 1985 the ruins of Nan Madol were declared a National Historical Landmark. Currently, a greater effort is being made to preserve them. A lot of people from other countries travel to Micronesia to see the ruins and said that a trip to the ruins is an unforgettable thing you can do in Micronesia.

The Lost City of Nan Madol. (2016, Sep 21). Retrieved from https://studymoose.com/the-lost-city-of-nan-madol-essay 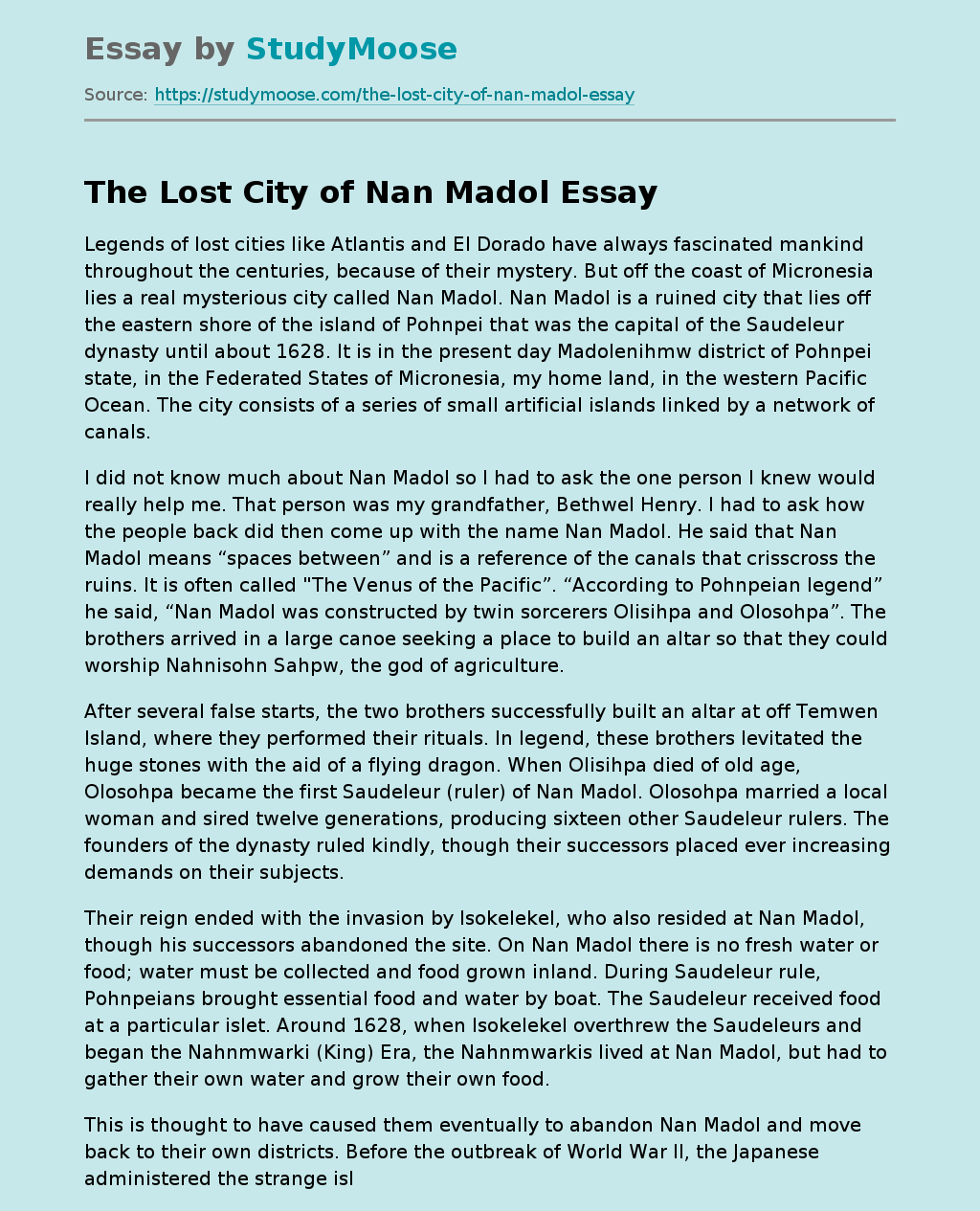