The Life of Sylvia Plath

A discussion of the poet, Sylvia Plath’s life and her suffering from manic depression.

The Life of Sylvia Plath Sylvia Plath1s life, like her manic depression, constantly jumped between Heaven and Hell. Her seemingly perfect exterior hid a turbulent and deeply troubled spirit. A closer look at her childhood and personal experiences removes some element of mystery from her writings. One central character to Sylvia Plath1s poems is her father, Professor Otto Emile Plath. Otto Plath was diabetic and refused to stay away from foods restricted by his doctor.

Don't use plagiarized sources. Get your custom essay on
“ The Life of Sylvia Plath ”
Get custom paper
NEW! smart matching with writer

As a result , he developed a sore on his left foot. Professor Plath ignored the sore, and eventually the foot was overcome with gangrene. The foot and then the entire left leg were amputated in an effort to save his life, but he died in November of 1940, when Sylvia was just eight years old. The fact that her father could have prevented his death left Sylvia Plath with a feeling of deliberate betrayal.

Instead of reaching out to other people for comfort, she isolated herself with writing as her only expressive outlet, and remarkably had a poem published when she was only eight. Plath continued prolific writing through high school and won a scholarship to Smith College in 1950 where she met her friend Anne Sexton. Sexton often joined Plath for martinis at the Ritz where they shared poetry and intellectualized discussions about death. Although they were friends, there was also an element of competition between Sexton and Plath. Sylvia Plath1s poem 3Daddy2 was possibly a response to Anne Sexton1s 3My Friend, My Friend.

2 It was as if Plath was commenting that her writing skills were just a bit better than Sexton1s. Sexton frequently would express to Robert Lowell in his poetry class her dissatisfaction with Plath1s writing. She said that Plath 3dodges the point in her poetry and hadn1t yet found the form that belonged to her.2 The competitive nature of their relationship continued to the very end. To all appearences, Plath appeared normal, her social life similar to other middle class coeds.Many were attracted to Plath1s brilliant mind, but few were aware of the inner torment that drove her to write, alienating her from the rest of society. Madamoiselle magazine awarded Plath a position as guest editor the summer following her junior year at Smith. Friends and family were stunned at her suicide attempt when she returned to college, most believing she had suffered a nervous breakdown due to the stress at the magazine. Her treatment was considered the best the medical world could offer and included electro-shock and psychotherapies. Plath tells her side of the story in the poem Lady Lazarus where she likens her experience to a victim of the Holocaust. But her apparent recovery enabled her to return to graduate summa cum laude the following year. Ted Hughes met and fell in love with the writer while she continued her studies at Cambridge on a Fulbright grant. Hughes was also a student at Cambridge, and a fellow poet. The couple married four years later, and after a short stay in the States, returned to England. After returning to London, Plath1s first book of poetry, Colossus, was published in 1960. Plath1s best known work, The Bell Jar was published following the birth of their second child.( Ted Hughes, 52-66) The novel is semi-autobiographical, describing a young woman1s tragic coming of age. The central character, a schoolgirl prodigy, Esther Greenwood, makes her way to adulthood in spite of periodic mental breakdowns. The Bell Jar is particularly poignant when Esther desrcibes her madness as 3 …a bell jar, stifling and airless that descends without warning…2 Not long after the publication of The Bell Jar in1963, Ted Hughes and Sylvia Plath split up. Plath was left caring for two children in a low-income area of London during one of the coldest Novembers in centuries. She worked between four and eight in the morning. Apparently being inspired by hardship, Plath sometimes finished a poem every day. In her last poems, death is given a cruel and physical allure and pain becomes tangiible. Leaving some food and milk at the kitchen table for her children, she gassed herself to death. Ironically, the woman Ted Hughes left Sylvia Plath for another woman that would commit suicide by gas. Posthumous Publications include : Ariel, published in 1965, inspired a cult following. The poems were less uniform and more emotional than those published in Colossus. Other volumes are :Crossing the Water ( 1971) , Winter Trees (1971) , Johnny Panic and the Bible of Dreams (1977) , and The Collected Poems (1981) , which was edited by Ted Hughes. At the funeral of Sylvia Plath, Anne Sexton said in a eulogy that she and Plath had 3 talked death with burned-up intensity, both of us drawn to it like moths to an electric light bulb.2 Ever since the 17001s, suicide has been thought of, in some circles, a romantic way to die ( i.e. Romeo and Juliet). Some individuals also think that to take your own life will add to your artistic reputation.Johann Wolfgang von Goethe1s novel The Sorrows of Weather suggested that suicide is accepted from those with artistic temperament because artists are supposedly more prone to drug use, isolation, suicide, etc… Every trip to the triumphant high points of Sylvia Plath1s life was followed by a long stay in the bowels of Hell. Hell for Sylvia Plath was her own fantasy playground that was demolished at a young and tender age. Maybe if her gift were better known when she was alive, her life would have been more fulfilling, but at least she is now at peace. Works Cited Hughes, Ted, and Fredrick McCullough. The Journals Of Sylvia Plath. London: Simon and Schuster, 1983. Butscher, Edward. Sylvia Plath : Method and Madness. New York: The Seabury Press, 1976. 3 The Bell Jar 3. Grolier1s Multimedia Encyclopedia. Grolier Electronic Publishing, 1995. 3 Suicide 3. Grolier1s Multimedia Encyclopedia. Grolier Electronic Publishing, 1995. Gilson, William.Sylvia Plath Bio. http://home.interlynx.net/~hecate/pbio.html

The Life of Sylvia Plath. (2020, Jun 02). Retrieved from https://studymoose.com/the-life-of-sylvia-plath-new-essay 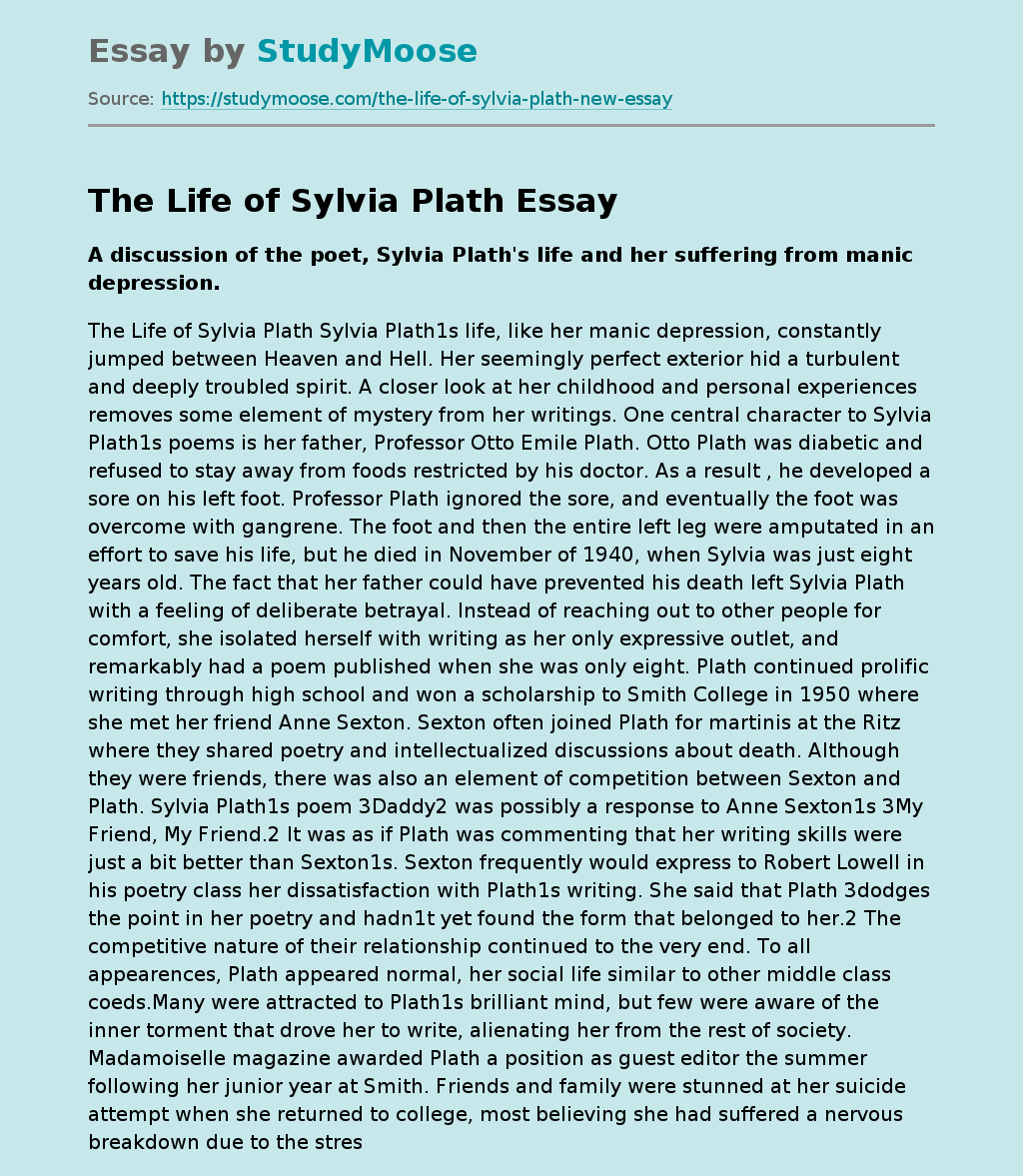