The Life of a Soldier

Life consisted of their complete determination to keep fighting and to maintain themselves strong. But only certain armies could accomplish and be more efficient in that aspect. Many fought long distances away from home in areas where conditions were scarce. Such conditions and hardships is what influenced and encouraged war exhaustion and desertion. But despite the difficulties, at least one had the chance to get clean. The chance to be hygienic was an indispensable prop to self-esteem. Another important issue was keeping soldiers fed.

Don't use plagiarized sources.
Get Your Custom Essay on The Life of a Soldier Just from $13,9/Page

Immense efforts were taken to make sure soldiers were fed, even if they caused starvation within the citizens.

Starvation played a major role of the collapse of some armies, one being, the latter’s army. With commanders of armies trying to ensure food and the improvement of their food, starvation was growing within society. But not only did the act of keeping clean and eating maintained their morale, communication with home was also a very significant factor.

Soldiers would send and receive letters from friends and family members; such letters helped soldiers stay up-to-date to the life that was left behind.

And even though a soldiers life was a routine, deadly, and sad; soldiers would try to do things that would help them get their minds off having to go into no man’s land the next day. Soldiers would take any opportunity that came at hand for fun when not in line. Many played gambling games (which was the most universal activity), football, boxing, tank races, and art. Many soldiers sought for the opportunity to be creative.

Soldiers lived a much narrowed down life. Devastating was the fact that soldiers that survived knew that the next day could be their last day. Conditions in trenches were impacted and poor. But regardless of what could happen the next day; soldiers tried their best to maintain their morale.

The Life of a Soldier. (2016, Sep 22). Retrieved from https://studymoose.com/the-life-of-a-soldier-essay 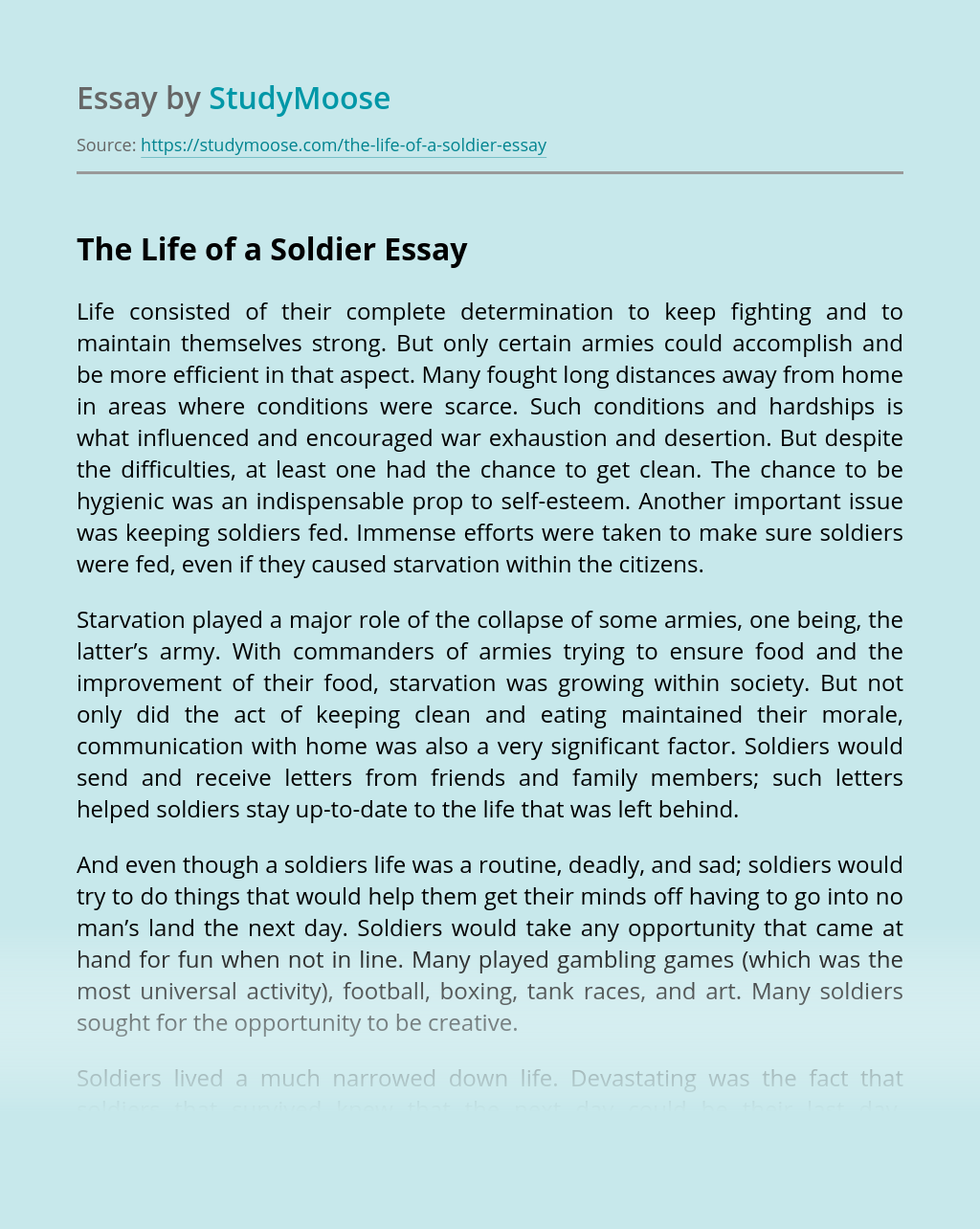 Dance in my life

Ever since I was a little girl dance has always been an important part of my life. When I was five, my mom enrolled me in dancing classes after my sister, never realizing that dancing would ever lead to anything serious. For the first year, dancing was a side hobby to help keep me busy...

How to Lead a Long and Healthy Life Speech

Good Health starts from the very infancy. It is here that protection and care is needed, so that each organ functions well, each organ develops naturally, and there are no deformities, disabilities and diseases but often the health of children remain neglected, with the result that they grow unhealthily and that affects their education as...

Get Essay
English in my life

In my language, English has only a small part. First of all, I speak tagalog all the time and my dominant language is tagalog. For example at home, we rarely speak English. Most of the time my family and I speak in tagalog and taglish. So, I’m really adjusting during my social interactions, most of...

Scariest Night of My Life

It was a Friday night. The full moon was shining through the bare branches making scary shadows on our path as we walked. A cool light wind was blowing sending leaves dancing noisily in the forest floor. I remember thinking to myself that the night, was the scariest night ever, and I wanted to ask...

The Life of Earnest Codman