The Life Cycle Hypothesis (LCH) is an economic concept analyzing individual consumption patterns. It was developed by the economists Albert Ando and Franco Modigliani. The theory is based on the observation that people make consumption decisions based on the income and resources they are expected to earn over their lifetime and at which stage of life they are at. The theory considers that individuals plan their consumption and savings behavior over the long term and intend to even out their consumption in the best possible manner over their entire lifetimes.

According to the life cycle hypothesis, young people have low incomes but big spending commitments for example on investing in their human capital through education and training, building a family, buying a home, and so on. So they save less and borrow more.

As they get older their income generally rises, they pay off their mortgage, the children leave home and they prepare for retirement, so they sharply increase their saving and investment.

In retirement, their income is largely or entirely from the saving and investment they did when working; they spend most or all of their income, and, by selling off assets, often spend more than their income that is, engage in dissaving. The life cycle hypothesis can be explained by the equation C = (W + RY) / T . Rewriting the equation gives the individual consumption function C = (1 / T)W + (R / T)Y .If this applies to every individual in the economy, the aggregate consumption function takes the form C = aW + bY.

The theory has the implication that high income leads to a low average propensity to consume over short periods of time.

However, over a long period of time, wealth and income increase together which leads to a constant ratio W⁄Y and thus a constant average propensity to consume. However, the theory is criticized for not considering that the elderly have precautionary savings and bequests which will discourage dissaving at the expected rate. Furthermore according to Froyen, the hypothesis does not consider liquidity constraints, with liquidity constraints households will not consume as much as they like. The life cycle hypothesis is a great improvement of earlier consumption theories such as the permanent income hypothesis and absolute income hypothesis. Despite being based on individual consumption, the hypothesis offers predictions of the economy as a whole. It is essential for policy makers to incorporate the theory when making policy decisions. 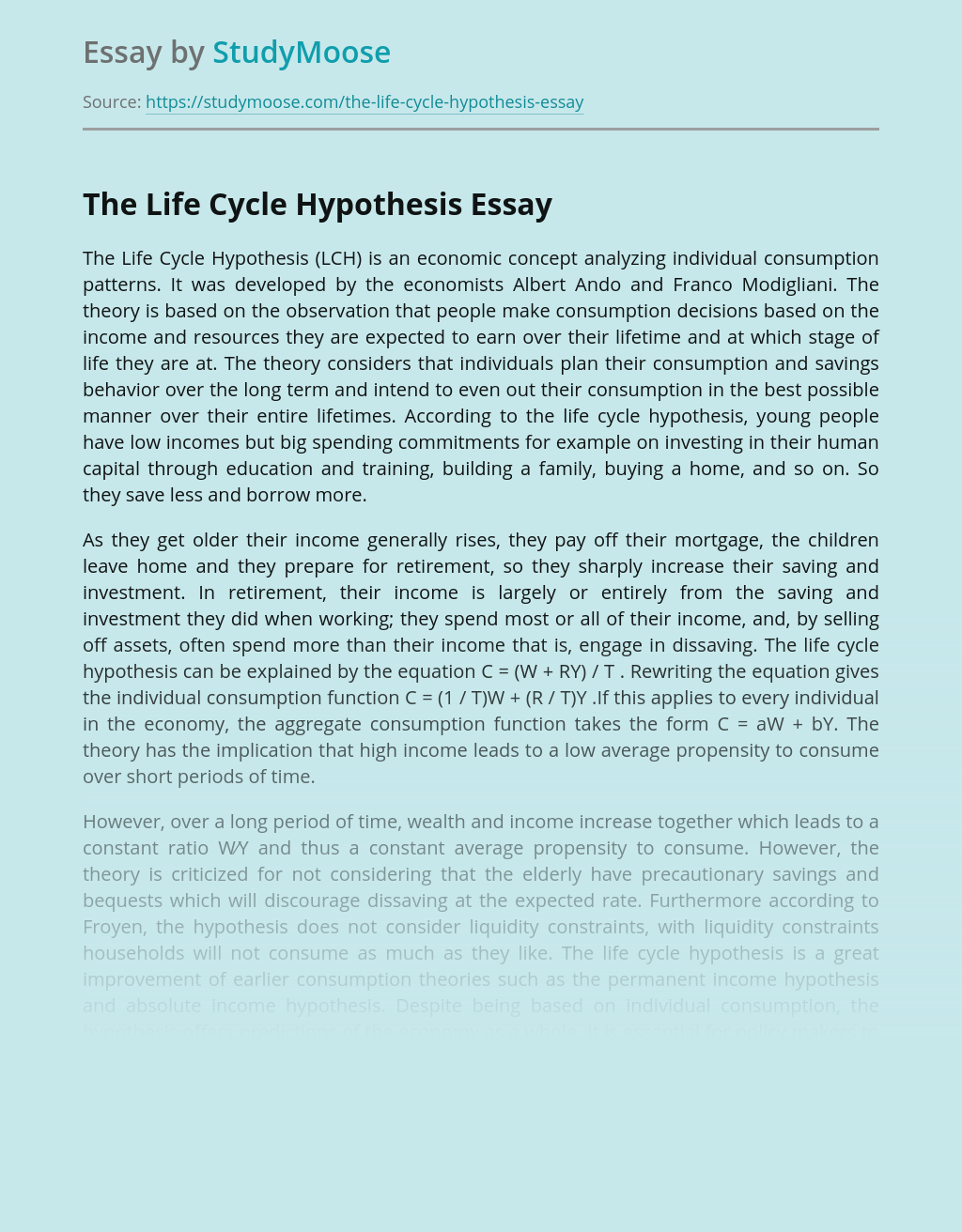 Don’t waste time
Get a verified writer to help you with The Life Cycle Hypothesis
Hire verified writer
$35.80 for a 2-page paper
Stay Safe, Stay Original