The Life and Legacy of Mary Mcleod Bethune

Mary McLeod Bethune, an African American teacher, was one of the great educators in United States history. She was a leader of women, an adviser to several American presidents, and a powerful champion of equality among races. Mary Jane McLeod Bethune was in Mayesville, South Carolina on born July 10, 1875. Mary was born the daughter of former slaves Pasty McLeod *Mother* and Samuel McLeod. *Father* Mary and most of her sisters and brothers were born slaves as well as her parents. Mary is was the fifteenth out of seventeen children.

Don't use plagiarized sources. Get your custom essay on
“ The Life and Legacy of Mary Mcleod Bethune ”
Get custom paper
NEW! smart matching with writer

When Mary’s parents were no longer slaves they saved up their money so they can buy a small farm in which Mary helped them with. “When she was eleven years old, she entered a school established by a missionary from the Presbyterian Church.” Mary walked 5 miles every day to go to school and back. When Mary got home in the evening she would teach the family what she learned while she was at school.

Later Mary received a scholarship to attend Scotia Seminary, a school for African American girls in Concord, North Carolina. She was strongly influenced by both white and black teachers there. She met some of the people that she could work closely with later. Even though she was rather than so serious with her studies, that did not stop her from becoming a lively dancer and developing a lasting love of music. Dynamic and alert, she was a very popular young lady. The people that were in her class looked up to her as their leader.

After she graduated in 1893 she went to the Moody Bible Institute in Chicago, Illinois.

Mary always wished to become a missionary in Africa. However, she was told that African Americans were not allowed to take positions of that sort. Mary became an instructor at the Presbyterian Mission School in Mayesville in 1896 and later at Haines Institue in Augusta, Georgia, in 1896 and 1897. While she was working at Kindell Institue in Sumpter, South Carolina, in 1897 and 1898, she met Albertus Bethune, whom she later married and had a son with. Her devotion to the education of African American children caused problems with her marriage, however, and the couple eventually separated. In 1904 the construction of the Flordia East In 1904 the construction of the Florida East Coast Railroad brought hundreds of African Americans to the area looking for work. Bethune saw a need for education to improve the lives of these people. She began her career as an educator in earnest when she rented a two-story house in Daytona Beach, Florida, and began the difficult task of establishing a school for African American girls. Thus, in an era when most African American children received little or no education, the Daytona Literary and Industrial School for Training Negro Girls was begun in October 1904, with six pupils (five girls and her own son). There were no equipment crates were used for desks, charcoal took the place of pencils, and ink came from crushed berries. At first Bethune did everything herself teaching, administrative things, dealing with the money, and keeping the school clean. She also searched garbage dumps for items that the school could restore and use, such as furniture and pieces of wood. Later she was able to secure a staff, many of whom worked loyally for her for many years. To help pay for the expansion of the school, Bethune and her pupils baked pies and made ice cream to sell to nearby construction workers.

In addition to her regular classes, Bethune organized classes for the children of turpentine workers. In these ways, she satisfied her desire to serve as a missionary. As the school at Daytona grew, it needed more money to run successfully. Bethune began to seek donations from anywhere she could. In 1912 she interested James M. Gamble of the Procter and Gamble Company of Cincinnati, Ohio, who contributed to the school and served as chairman of its board of trustees until his death. In 1923 Bethune’s school for girls merged with Cookman Institute of Jacksonville, Florida, a school for boys. The new school became known as Bethune-Cookman Collegiate Institute, soon renamed Bethune-Cookman College. Bethune served as president of the college until her retirement in 1942. She remained a trustee of the college to the end of her life. By 1955 the college had a faculty(teachers and administrative staff)of one hundred and a student enrollment of over one thousand. Bethune’s business activities were confined to the Central Life Insurance Company of Tampa, Florida, of which she was president for several years; the Afro-American Life Insurance Company of Jacksonville, which she served as director; and the Bethune-Volusia Beach Corporation, a recreation area and housing development she founded in 1940. In addition, she wrote numerous magazine and newspaper articles and contributed chapters to several books.

In 1932 she founded and organized the National Council of Negro Women and became its president. By 1955 the organization had a membership of eight hundred thousand. Bethune also gained national recognition in 1936, when President Franklin D. Roosevelt (1882–1945) appointed her director of African American affairs in the National Youth Administration and a special adviser on minority affairs. She served for eight years and supervised the development of employment opportunities and recreational facilities for African American youth throughout the United States. She also served as a special assistant to the secretary of war during World War II (1939–45). In the course of her government assignments, she became a close friend of Eleanor Roosevelt (1884–1962). During her long career, Bethune received many honorary (received without fulfilling the usual requirements) degrees and awards, including the Haitian Medal of Honor and Merit (1949), the highest award of the Haitian government. Mary McLeod Bethune died in Daytona Beach on May 18, 1955, of a heart attack. She was buried on the campus of Bethune-Cookman College.

The Life and Legacy of Mary Mcleod Bethune. (2021, Mar 05). Retrieved from https://studymoose.com/the-life-and-legacy-of-mary-mcleod-bethune-essay 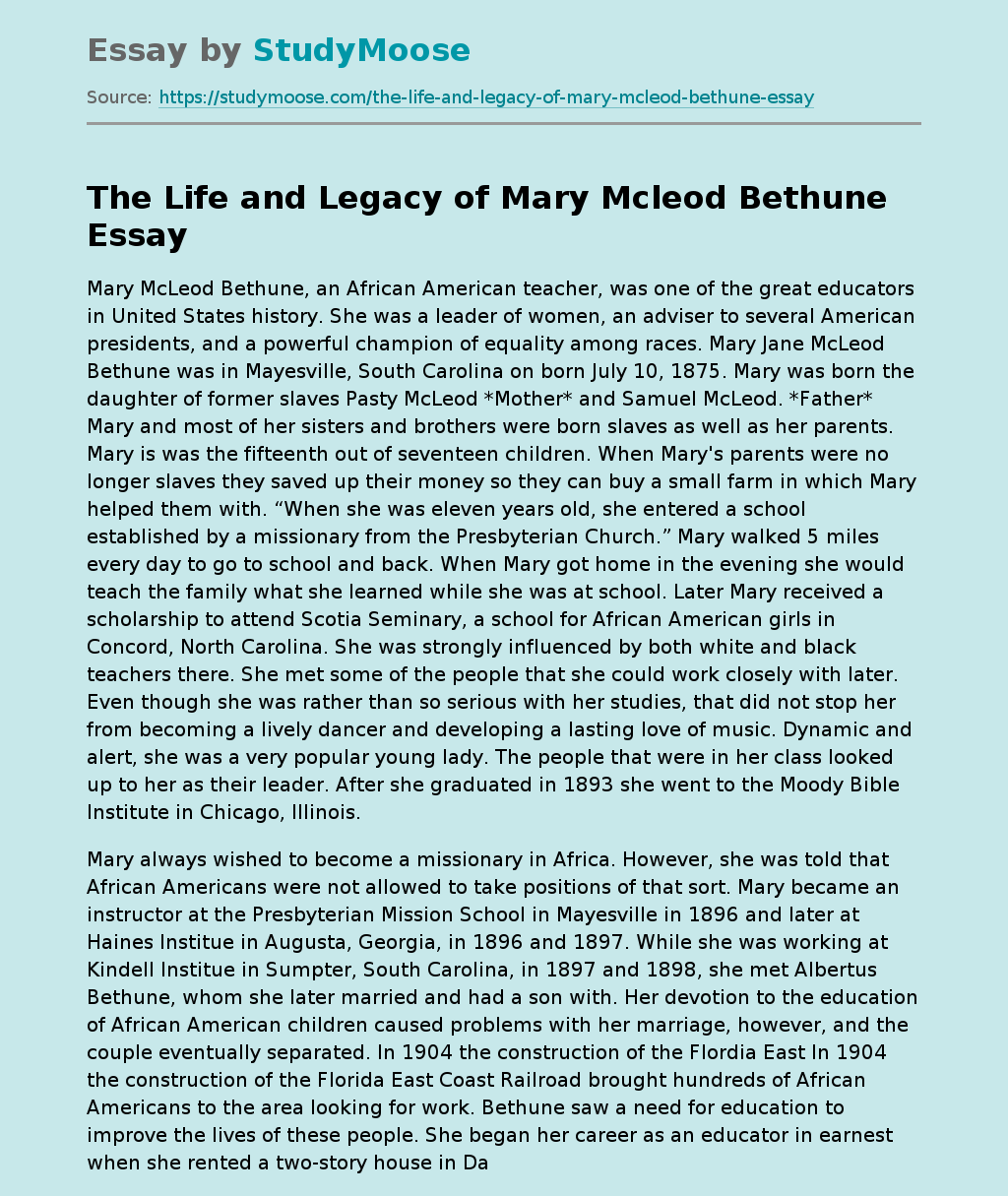