'The Lesson' by Roger McGough

‘The Lesson’ by Roger McGough and ‘Comprehensive’ by Carol Ann Duffy both discuss the violence in schools in their poems. ‘The Lesson’ is a more visually violent poem whose bloodthirsty villain is infact the teacher, whereas the characters in ‘Comprehensive’ tell us about the problems and racial tensions in their schools without as much violent language.

Roger McGough writes about violence and tension in schools through the use of his own opinions. He uses humor in ‘The Lesson’ as he shares his views on three main themes, the first being his criticism of classroom management.

‘Chaos ruled OK in the classroom’ suggests that the teacher cannot control his students and this is further confirmed as ‘his voice was lost in the din’.

One of the most important qualities a teacher should have is power so they may continue with the lesson planned without any unnecessary interruptions and the teacher in this poem should have been able to stop the noise being made almost at once.

This point leads onto McGough’s views on teacher/pupil relationships. The poet implies that there is very little respect for the teacher as the children carry on talking and he is ‘ignored’. Throughout the rest of the poem we see the teacher carry out his anger on his class, even the headmaster joins in, someone who is seen as having a high authority and someone who must care for the children to the best ability he can. The third view we see the poet has is that schools are potentially threatening environments.

We know this from the line nine until the end as vicious acts are taken place on the students, instead of them being in the safe environment that school is meant to be.

Carol Ann Duffy uses her several characters in ‘Comprehensive’ to express her own views on violence and tension in schools. It is mainly the English characters that show any sign of tension in school. It is clear that Carol Ann Duffy sees white, teenage boys who are mainly racist and she shows this mainly through the personality ‘Wayne’. It is clear that Wayne is ignorant through the lack of education.

Carol Ann Duffy has taken what she believes to be a typical thug, he is almost a caricature in the way that his name is associated with British working-class males with racist attitudes and is at the age when he believes he must prove his masculinity by ‘paki-bashing’. Wayne is the stereotype suggested by his name and Carol Ann Duffy tries to bring out his racist remarks in his stanza.

The poet portrays the foreign speakers as shy and nervous, something which she must believe is true. The immigrated children do not talk of racism at all, so it is clear that Carol Ann Duffy believes that tension and violence in schools is mostly down to the English youths.

In ‘The Lesson’ structure and form is used by Roger McGough to write about violence and tension in schools. The opening two lines are in italics, which clearly separates them from the rest of the poem. It is almost as if it is not part of the poem itself but an introduction. It asks an ironic question and the poem beneath it is an answer. The strong rhythm of ‘The Lesson’ suits the disturbing yet powerful poem. Rhyme is used every second and fourth line and the stanzas frequently end with a horrific line such as ‘put the gun to his temple and fired’. This adds to the shocking focus in the poem.

Carol Ann Duffy uses structure and form in ‘Comprehension’ to discuss the environment at schools by using her ventriloquist techniques by using seven different characters. Each one has a unique view, so the poet can use several opinions on tension among youths. Carol Ann Duffy uses enjambement in this poem so that the poem would be read without any particular rhythm. The structure of Wayne’s sentences are very short and this tells us that he is not properly educated, which may be one of the reason why he is racist, because he does not know how to accept the cultures of others.

This is a dramatic change of word as corporal punishment used to be accepted and meant that pupils would be cained or whipped for their wrong – doing, whereas capital punishment was abolished in 1965 because it meant certain death. Therefore, the suggestion that children should receive the death penalty for minor acts in the school means that Roger McGough’s ‘The Lesson’ is ironic and is to be taken light-heartedly.

The title ‘The Lesson’ could be interpreted in two ways. It could mean a school lesson such as mathematics or it could mean retribution and then the common clichï¿½ ‘Im going to teach you a lesson’ is used in a literal way which creates a sense of danger and fear. Puns are also used in ‘The Lesson’ as the teacher declares that ‘first come, first severed’, which is taken from ‘first come first serve’.

At line 36, silence has its hands up, as if to surrender to the teacher. The teacher has won the war. The readers recognize the clichï¿½s and puns Roger McGough has cleverly used and this makes the poem more comical for us to read. ‘School-speak’ such as ‘Homework will be set’ and ‘Please may I leave the room sir?’ is used to help the readers feel comfortable placing an odd situation in a well-known place.

‘The Lesson’ by Roger McGough. (2017, Aug 26). Retrieved from https://studymoose.com/the-lesson-by-roger-mcgough-essay 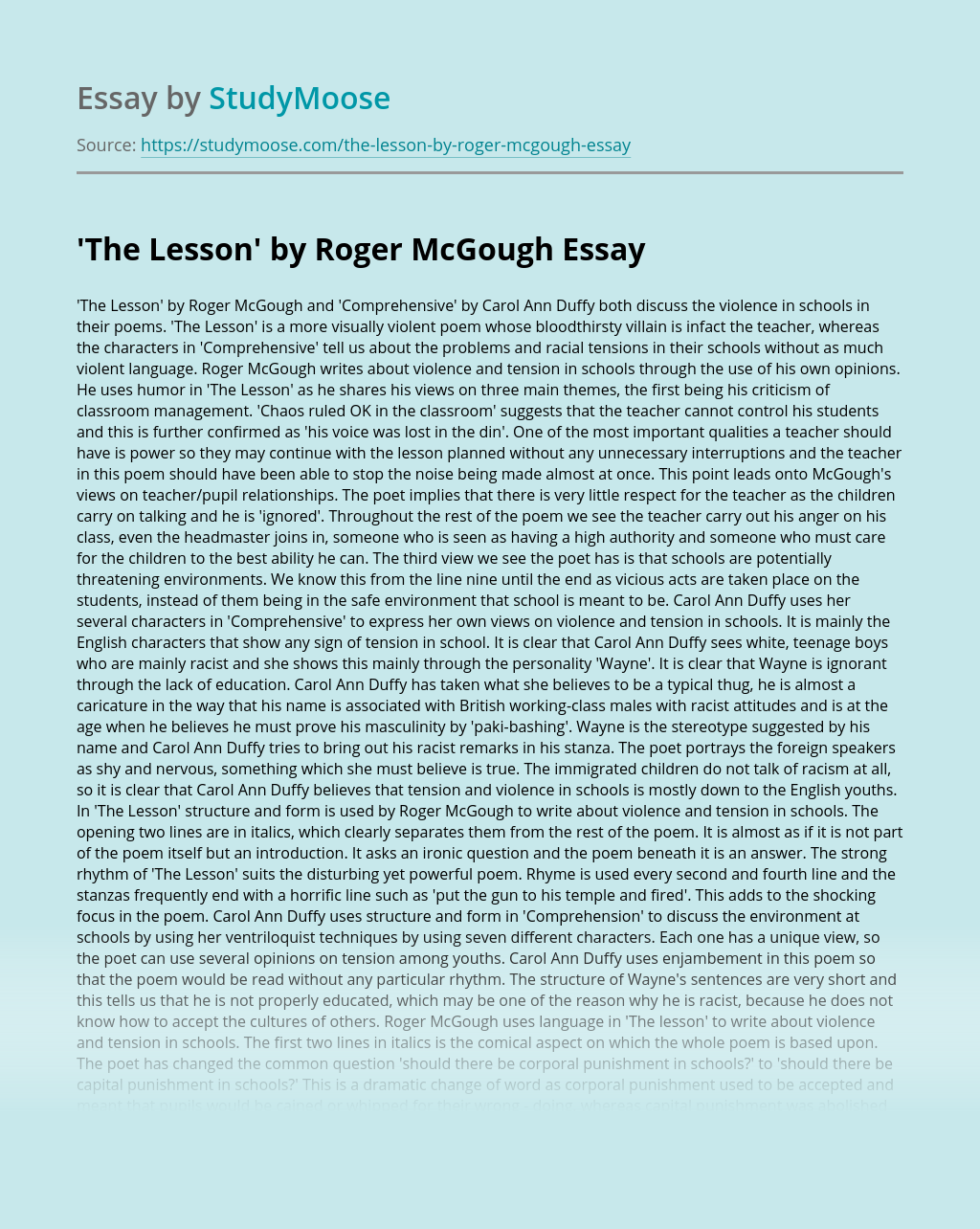 Symbols in "A Sense of Shelter"

In A Sense of Shelter by John Updike, various symbols are used to emphasize the overall theme of comfort and express the gradually depressing mood. The author uses bad weather, a familiar desk, and a familiar school as symbolic objects within the story to display these ideas. Updike strategically places these symbols throughout the story,...

"Not Much Just Chillin"

Change is known to be the most constant thing in the world. Hence, individuals are often changing which leads to conflicting issues in life. Moreover, every person gets into a stage where in a person needs to change. Most of us experience change during our moments in middle school. Every person during this time of...

Get Essay
The Use of Question Tags

It has been generally supposed that Wordsworth’s theory of poetic language is merely a reaction against, and a criticism of, ‘the Pseudo Classical’ theory of poetic diction. Such a view is partially true. His first impulse was less a revolt against Pseudo-classical diction, “than a desire to find a suitable language for the new territory...

Writers Background He was born in Barrio Naguilian in Bauang, La Union on June 17, 1911. He was the fourth child of Crisanto Arguilla and Margarita Estabillo, hard-working farmer folk who owned a small piece of land. Aside from being a farmer, his father was also a carpenter; his mother, on the other hand, was...

Rhetorical Analysis on "An Elementary School in Slum

The poem “An Elementary School Classroom in a Slum” by Stephen Spender, begins with a stanza depicting the worrying condition of the students in elementary school. As the poem extends further, Spender points out the corruptions in the Government and accuses it for paying little attention to children’s education and health conditions. He argues that...