The Legend of Osiris

The story revolves around the birth, life, death and the creation of the legend of Osiris, the great king of ancient Egypt. Osiris was born as the son of Goddess Nut. His birth was a miracle in itself as Nut had to sidestep the curse of Re by adding five more days to the ordinary calendar. We understand right from the beginning that he is no ordinary person. His divinity is confirmed by the several auspicious signs that were seen over the land when he was born.

Don't use plagiarized sources. Get your custom essay on
“ The Legend of Osiris ”
Get custom paper
NEW! smart matching with writer

An oracle even prophesied that he will bring great joy to his subjects. Osiris marries his sister Isis and together they rule over Egypt.

He transforms his wild, savage, and cannibalistic subjects into a refined and graceful civilization. Osiris taught them to farm the land and cultivate grain. He showed them how to make bread and wine. Once his people knew how to feed themselves Osiris turned his attention to their intellectual growth. He taught them to obey laws and live as a peaceful community.

He introduced the world of arts and delighted them with his music and poetry. He is not just an ordinary king, but more of a god like figure who creates a new community, begins a new civilization.

He is the god who transforms his kingdom into Paradise. Then evil enters into the ideal world in the form of Seth, the brother of Osiris. The innocent and trusting Osiris is killed by Seth’s treachery. Seth entraps him in a coffin, seals it and throws it into the Nile.

The waves cast the coffin into a tamarisk tree that grew on the shore. Osiris’s divinity is again affirmed by the fact that the tree grew branches, leaves and flowers to encase the coffin. It became renowned for its beauty and fragrance and King Malcander cut it down to make a pillar for his palace, unaware that it contained Osiris’s coffin.

Meanwhile in Egypt Isis understands that her husband is dead and goes in search of his body. She searches far and wide and finally comes to King Malcander’s court. On realizing that Isis is a goddess with magical powers King Malcander gave her the pillar which contained her husband’s coffin. Isis takes the chest and leaves for Egypt. But Seth discovers the hidden body, rents it into fourteen pieces and threw the pieces into the Nile. But the crocodiles in the river, out of their respect for the god, did not touch his flesh.

Isis goes in search for the rent pieces and discovers all but one of them. In each of the places she found the rent pieces, she built a shrine and asked the priests to perform a funeral rite for Osiris. Thus Osiris’s funeral was held in thirteen places. But Isis did not bury Osiris in any of these places. Instead she joined all the pieces of his body, replaced by magic the missing part, embalmed his body and hid it. Thus we see that due to her efforts the legend of Osiris is firmly established in Egyptian culture. By building temples in his honour, she immortalizes him as the god of Egypt.

Osiris’s spirit comes to visit his son Horus and trains the child to face Seth. Re, another great god comes to help Horus in his battle against Seth. Horus finally defeats Seth and avenges his father’s death. But the fight between good and evil does not end there. It continues into life after death. After his death, Horus’s spirit contends with Seth’s spirit for the right to rule over the world. In Egypt, Isis finally reveals Osiris’s true grave, which came to be revered as the most sacred place in the land. But the Egyptians still wait for the final battle in which Horus will destroy Seth forever.

They await the ultimate triumph of goodness over evil, after which Osiris will come back with his followers to earth again. It is in this belief that the Egyptians started the custom of embalming dead bodies and keeping them beneath the pyramids. When evil is completely destroyed the blessed souls can return to earth and enter their bodies again. Then, once again, there will be paradise on earth under the leadership of their beloved king Osiris. The story deals with the eternal conflict between good and evil. It shows us that though the evil forces are really powerful and destructive, they can be overcome.

And mankind, in its fight against evil is always assisted by divine forces. This is evident from the fact that Re and Osiris helps Horus in his war against Seth. It ends on an optimistic note that evil will be finally conquered completely. And that it is possible for mankind to live peacefully and happily under the rule of an ideal god like Osiris.

The Legend of Osiris. (2016, Oct 17). Retrieved from https://studymoose.com/the-legend-of-osiris-essay 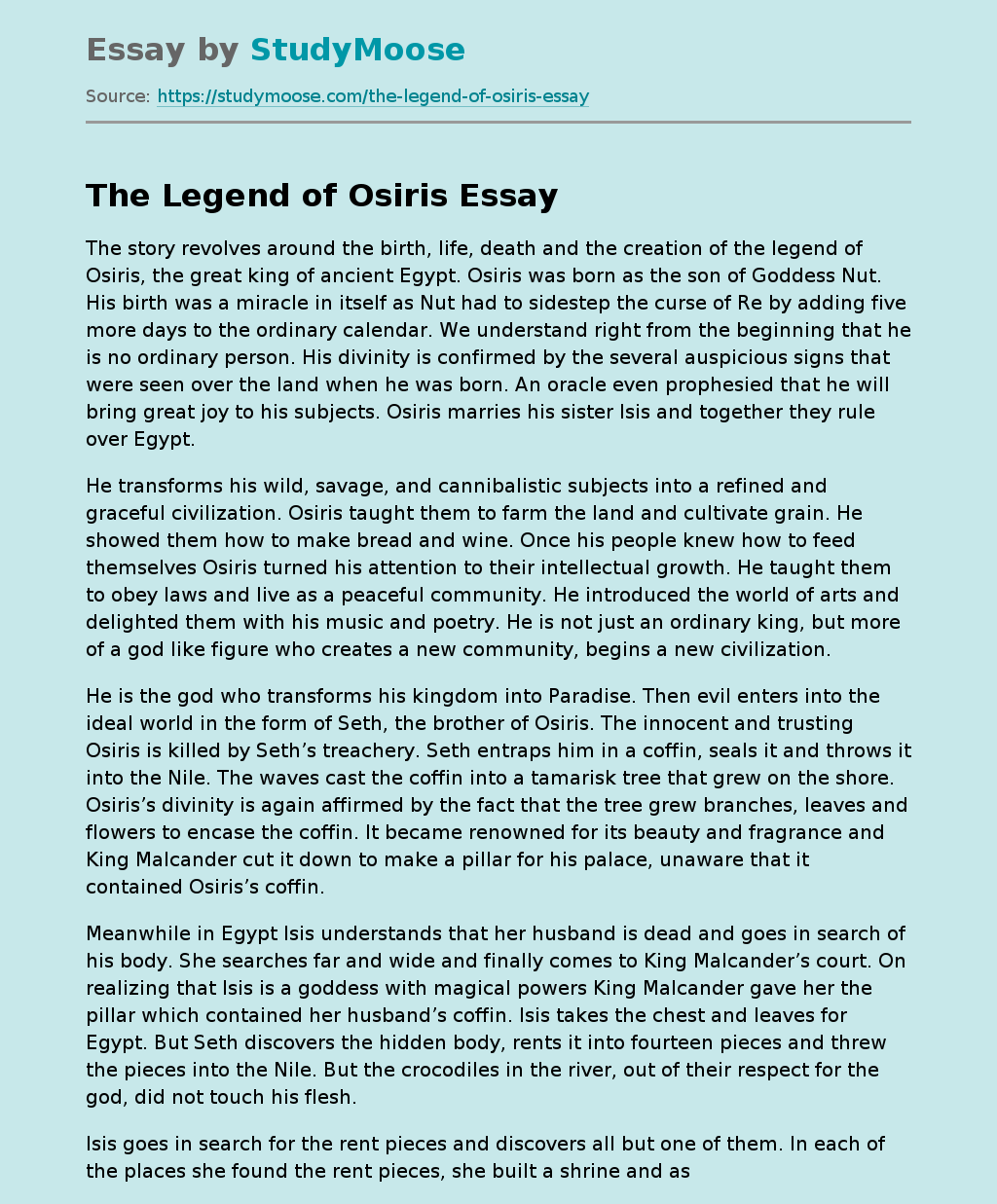