The Leadership Crisis and the Free Market Cur

The book outlines the critical integrated principles that any leader requires to be more successful. All these principles reflect on the present day concept of life and liberty as well as the quest for happiness from the founders of America. The author believes that most of the economic issues directly result from the actions of leaders who have forgotten about their sole purpose in the organizations they serve. Allison drew his conclusions from both the Objectivists and the libertarian philosophies where he described the values that the current leaders must follow.

Don't use plagiarized sources. Get your custom essay on
“ The Leadership Crisis and the Free Market Cur ”
Get custom paper
NEW! smart matching with writer

These values would eventually help in guiding the making of decisions at the individual, corporate or public policy level.

The same way the government visualizes life, liberty, and the pursuit of happiness, Allison’s world too envisions these factors as leading to the success of an individual as well as the business in general. However, it is so sad that the book will only reach the hands of a few bureaucrats who will not even bother reading the book despite having it in their homes. These bureaucrats are among the many hoards in America who fail to reason fully towards the determination of a course of action.

Allison points out a few connections in his book between life and liberty as well as the pursuit of happiness where he outlines that these factors politically visualize the role that supports the vision of a business; this role also allows for the prosperity of an individual (Allison, 2015).

Besides, he outlines that people cannot act in consistency without having any consistent objectives or values. He goes ahead to show some of the examples of inconsistencies which allow the reader to grasp what he intends to put across. Alison encourages the consistent application of moral behaviors among businesspersons and government representatives as well as the public.

Nonetheless, it is unusual how an individual can point out that dishonesty is an inconsistent requirement, and that being honest extends to disconnecting oneself from reality at some point. However, honesty is not often discussed under such terms. Hence, Alison claims that dishonestly fundamentally allows people to entertain the impression of the common good; yet no such thing as the common good exists because no one talks about it in the broader context. Besides, most likely no day goes without hearing someone agitating about solving some issues by forcing others to act for the common good- as if no one would have his liberty trampled during this process. The common good is a fraudulent act for the public interest to coerce the extraction of a forced favor from the citizens. However, this fraud would collapse following the requirements of honesty, integrity, as well as justice.

When reading through the book, you will notice that political oppositions obstruct themselves from hearing what the public has to say beyond the “noise” made from their utterances. On the one hand, Allison draws parallel conclusions between the business practice, which seems excellent, and on the other hand, a specific political perception. However, for some reason, the outcome is so apparent because of an outright act of not hearing the grievances of the public, thus making it difficult to change the minds of such political adversaries. It is sad how our culture is filled with individuals who are full of themselves to even think about the requirements of others.

Allison feels that America is in a war for the future citizens of the Western culture, which I must agree with him. America may or may not prosper depending on the cultural ideals held by the country. Nonetheless, life, liberty, and the pursuit of happiness will no longer receive protection because of the flourishing dishonesty among the leaders as they continue to become inconsistent while embracing the common good as their objective to be acted upon by the government.

Allison presents a rational system of values that human beings can embrace for them to flourish when applying the philosophical consistencies to clarify equality among the people, business organizations, as well as the entire society. Additionally, the author speaks from the life experience he had when he positively related with others thus leading to his long-term success. He has also helped me realize and become conscious of my values to become happy in life. This book additionally gives people the confidence to have a purpose of clarifying how they will their lives going forward.

To pursue happiness and success, you must use your best judgment skills to rationalize your thoughts into making the right choices depending on the values you have. Despite the degree of doing so, the more you clarify your values, the more these values get integrated into the lives of individuals. Besides, people will be more equipped to make decisions from the best of their interests. Anything that helps in the clarification of human values by rationalized critical thinking is priceless and gives people the confidence and urge to follow the consistencies of their actions through their moral values as well as their perceptions of the real world.

The Leadership Crisis and the Free Market Cur. (2021, Dec 02). Retrieved from https://studymoose.com/the-leadership-crisis-and-the-free-market-cur-essay 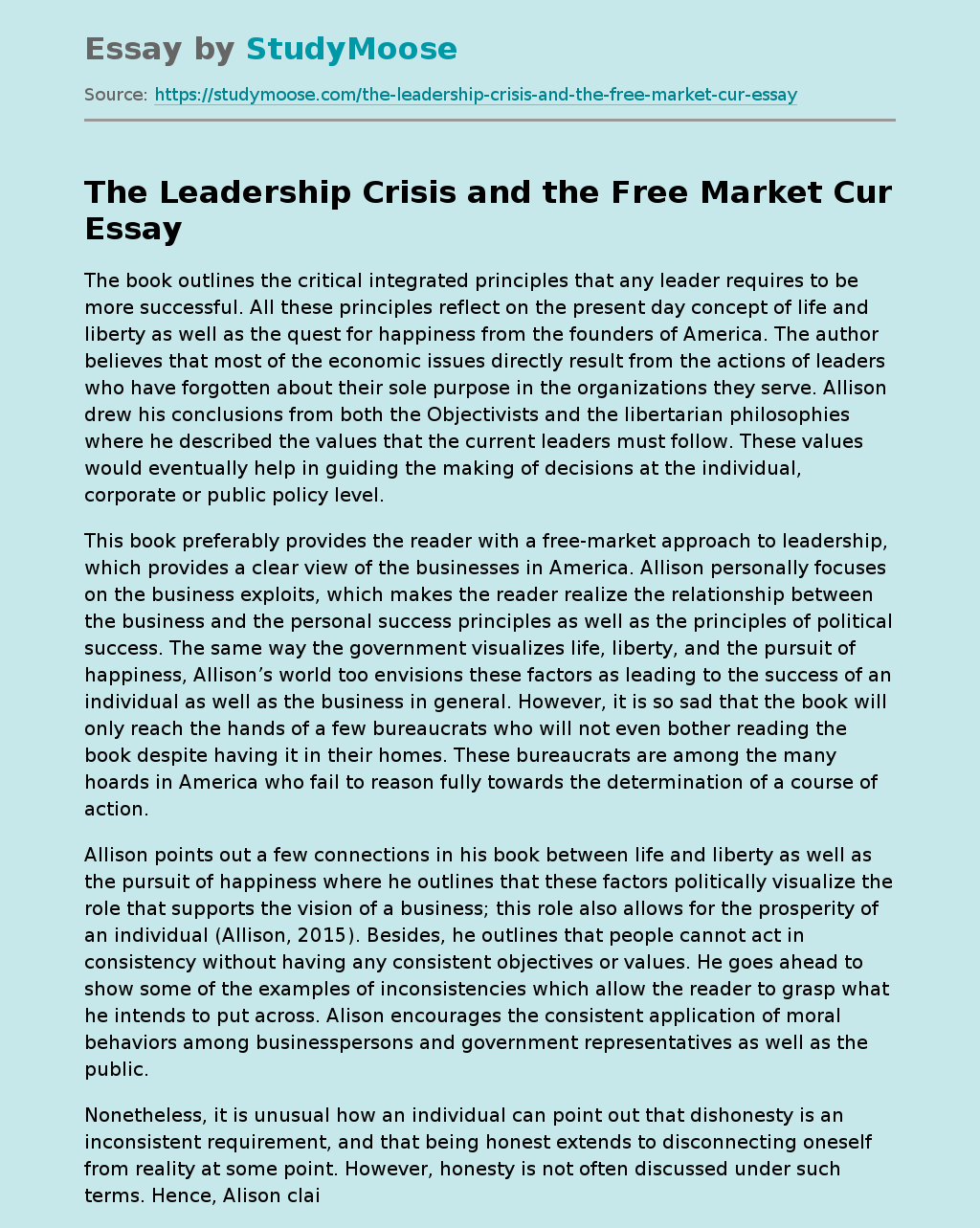