The Language In Look Back in Anger

The language in look back in anger is different compared to its contemporaries. The language is realistic; the characters are able to say what they would say in that situation in real life. In a way the writer John Orsborne had no limits because if something had to be real it needed everything to be realistic. Orsborne uses his characters as a mouth piece to examine the reality of life in the 1950s in Britain.

Cliff has a Welch accent which is shown when he says like “boyo” and “dullin”.

Don't use plagiarized sources. Get your custom essay on
“ The Language In Look Back in Anger ”
Get custom paper
NEW! smart matching with writer

At the start of the play there seem to be a lot of exposition from the characters to describe themselves or tell us about the situation. For example ” James Porter, aged twenty five, was bound over last week after pleading guilty to interfering with a small cabbage and two tins of beans on his way home from the Builders Arms.” This tells us Jimmy’s age and that he likes going to the pub, and shows that Cliff seems to have a sense of humour.

The exposition goes on through out the play. We see this when jimmy is talk about Alison family and what was happening to his dying father when he was 10. The colonel has his share in exposition when he’s talking to his daughter Alison about the past. “It was March 1914, when left England, and, apart from leaves every ten years or so, “the information Osborne constantly provides us with about each characters past helps the audience understand their personalities.

In this play Orsborne uses dramatic irony. For example jimmy has some lines of dramatic irony, for example when he says to Alison “if you could have a child, and it would die.” This is ironic because towards the end of the play Alison has a miscarriage. Although Jimmy wanted her to go through this sort of pain he is affected in a way he never expected. The other ironic line Jimmy has is when Helena tells him that his got a phone call and he says ” well, it can’t be anything good, can it?” this is ironic because as he gets the message from the call that Hugh’s mother has had a stroke. Jimmy at some extent is a product of what has happened to him during his life.

The play involves a lot of emotion. Jimmy chief motivating emotion is anger through out the play until the end when he embraces Alison, this is no doubt it is the characters most vulnerable point in the whole play.

The pauses are very important in the play because they make the moments of tension more effective, and shows us the emotion of most of the characters. For example when Alison tells cliff she’s pregnant.

Cliff: (after a few moments) I will need some scissors.

Alison: They re over there.

Cliff: (crossing to the dressing table) that’s something, isn’t it? When did you find out?

At this point it shoes that Cliff is troubled about this, that’s why he asks for the scissors just to hide his feelings for her. Another point which we worked on in class is when Alison arrives at the end of act 3 scene 1; there is a big pause before she says anything.

Jimmy: (to Helena, after a moment) friend of yours to see you.

After saying the line he leaves the room and the two women are left staring at each other. This is obviously this is a cliff hanger ending to the scene, there is tension between the two women.

Osborne has included several monologues in the play. Jimmy is the character with most of the monologues. In the majority of his monologues his objective is to provoke the others but the desperately try to ignore his taunts. His main objective usually is to irritate his wife Alison that it could lead to an argument. From the beginning of Act 1he is constantly trying to make his wife angry, he finally succeeds when she gets burnt with an iron and she tells him violently to get out.

Jimmy: (her head shaking helplessly) clear out of my sight.

This s the first time that Alison is actually showing that she is angry with jimmy. Even though the fight that caused the accident was between him and Cliff.

The monologue that I worked on in class was from act 2 scene 1 when Alison is about to go to church with Helena and jimmy is not in favour of her decision. In this monologue I had to think of the emotions which where associated with jimmy at the time, and I had to picture they way he would talk and act to these emotions. At the start of the monologue he is motivated and wants every one to see how he feels and as he goes on he loses his inspiration because he knows that no one is paying any attention to him.

The Language In Look Back in Anger. (2017, Jul 07). Retrieved from https://studymoose.com/the-language-in-look-back-in-anger-essay 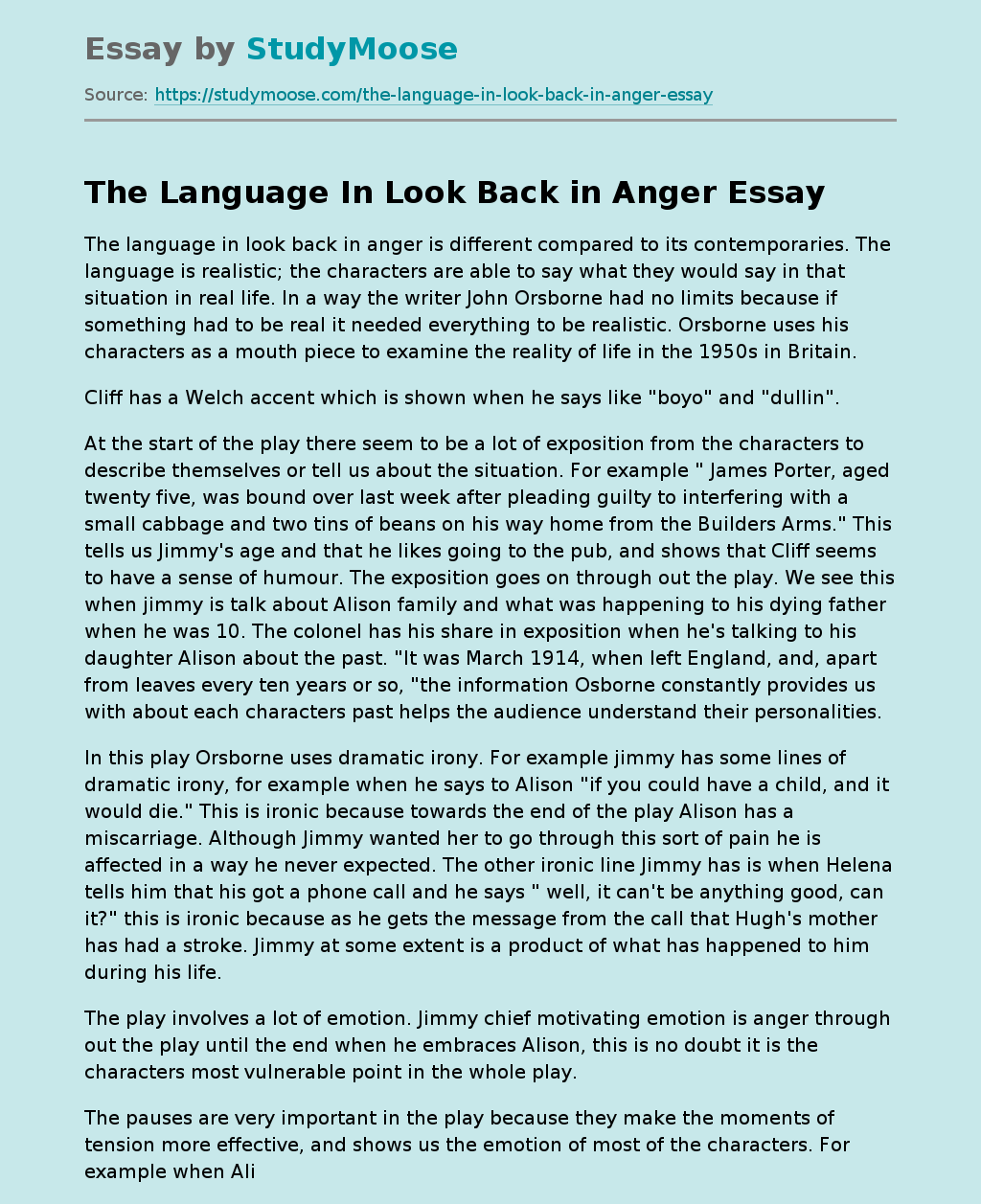