Ross infuses irony into the last page of “The Lamp At Noon” to convey the fatality of the single-minded. Set in the era of the Great Depression, Ross’s short story emphasizes one couple’s conflicting attitudes regarding the best interests of their child. Paul, a proud and obstinate farmer raised on family soil, is convinced that his son should grow up feeling the same pride which comes from owning the land. His obsession with ownership and independence so completely dominates his thoughts that he cannot perceive the hopelessness of remaining in the perpetual dust storm that ravages his farm.

Don't use plagiarized sources. Get your custom essay on
“ The Lamp at Noon Author: Sinclair Ross ”
Get custom paper
NEW! smart matching with writer

Ignorant to the damage that the dust inflicts upon his family’s physical and emotional health, Paul metaphorically chains his wife and son to an existence without a future. Ellen, on the other hand, is determined to provide her son with the vain luxuries that she enjoyed in her childhood. Unable to comprehend the satisfaction of self-sufficiency, she insists that Paul get a job in town working under someone else’s command.

Ellen and Paul’s inability to acknowledge the merits of the other’s dreams or accept their own perceptional flaws causes their relationship to disintegrate. Desperate to get away from the hopelessness of a stagnant farm, Ellen takes their baby and flees into the heart of the storm: “But nearly two hours later, it was himself who came upon her. Crouched down against a drift of sand as if for shelter, her hair in matted strands around her neck and face, the child clasped tightly in her hands.

” Ellen’s attempt to find shelter in “a drift of sand” clearly demonstrates that she too, is blind to the futility of her struggles. She is so obsessed with the dream of a town life for her child that she overlooks the foolishness in seeking security from sand during a sand storm. Her single-minded resolve prevents her from perceiving the irony in the situation; she fled from fields of hopeless dust directly into the deadly dust storm.

Even in her flight, it is obvious that Ellen cannot escape from the consequences of her husband’s unassailable pride. Her dream of a more attractive lifestyle with “pretty things” is quickly disillusioned when the dust from Paul’s fields “matted strands [of her hair] around her face and neck”. The image of Ellen’s messy, dust-clumped hair insinuates that her husband’s determination to live on a dying farm makes it impossible for her to achieve a pampered lifestyle. However, Ellen’s own intense resolve makes her oblivious to the futility and destructiveness of her struggles.

Though she is obsessed with her baby’s future, her first priority after suffering several hours in the cold, biting wind is not to restore the warmth of her child, but rather, to fix her hair: “‘Hold him,’ she said as he knelt beside her…. ‘Hold him until I tidy my hair'” Throughout the story, Ross often emphasizes Ellen’s physical appearance to portray the depth of her vain aspirations. Her ruthless determination to give her son a lavish future forced her to flee into the storm which destroyed his life altogether. However, Ellen’s desire for “pretty things” is so consuming that she remains unaware of her child’s death. Consequently, she is still concerned about her appearances. By “tidying” the “matted strands of hair”, Ellen only re-braids and strengthens the metaphorical noose of vanity that initiated her son’s destruction.

Ellen and Paul both harboured beautiful dreams for their baby’s future, but neglected his needs of the present. Their consuming determination to provide a better lifestyle for their child made them ignorant to his fundamental requirements. As a result of the couple’s neglect, their son’s potential was destroyed: “The child was quite cold. It had been her arms, perhaps, too frantic to protect him, or the smother of dust upon his throat and lungs…. He knelt transfixed… touching fearfully with his fingertips the dust-grimed cheeks and eyelids of the child.” In contrast to the rosy cheeks of a baby who receives kisses and love, their child’s face is lifeless and grey with grime. Ironically, it was Paul and Ellen’s overwhelming concern for their baby and his future that prevented the couple from giving him care and love.

Obscured by his prideful aspirations, Paul insisted that his son remain on their drought-ravaged farm in order to enjoy a prosperous life. In doing so, however, he only “smothered dust upon [his son’s] throat and lungs”. At the same time, Ellen’s devotion to her child’s future blinded her to his present needs. Her “frantic” impulse to run away from her husband’s dead-end goals and into the storm only allowed the layer of “grime [upon] his cheeks and eyelids” to thicken. Ellen and Paul both believed that they were working for their baby’s best interests; yet both of them were so focused on attaining their own goals that they inadvertently left their child uncared for. The couple’s single-minded concern for their son’s future deprived him of the attention and warmth that a rosy baby requires. In the heat of Ellen and Paul’s senseless battles over the best interests of their son, he died “quite cold” and unnoticed. 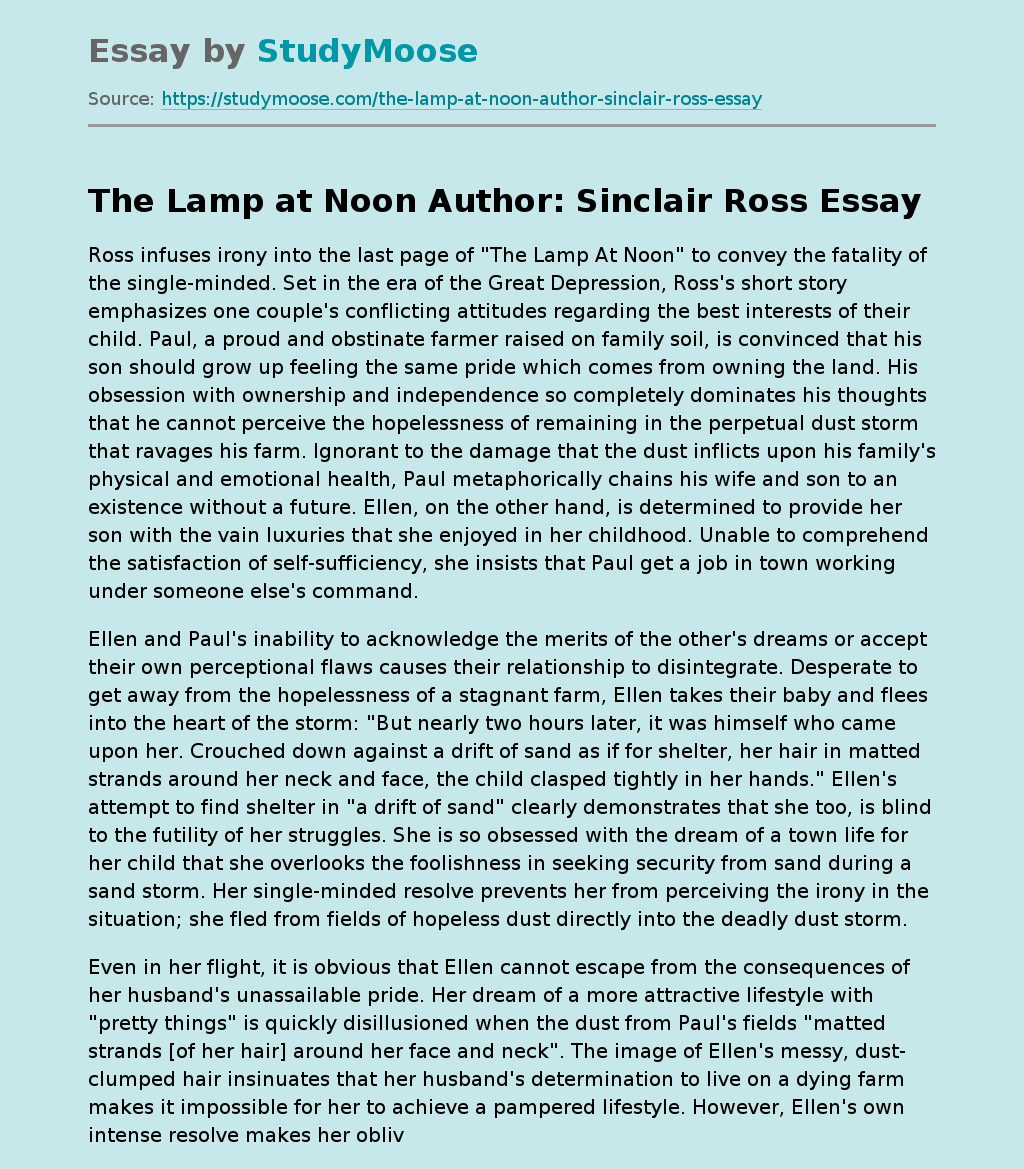