The Key Idea of Eternal Sunshine of the Spotless Mind

When the film “Eternal Sunshine of the Spotless Mind” debuted, critics were almost entirely unanimous in their reverence for the film. But although many pundits agreed on the overall quality of the film, they tended to disagree on the film’s most impressive characteristics. Some, like Robert Wilonsky of the Dallas Observer, applauded the film for the iconoclastic style of its writer, Charlie Kaufman, and its director, Michel Gondry: “[‘Eternal Sunshine’] feels like something entirely brand new; such are the gifts of Kaufman and Gondry, inventors and magicians.

Don't use plagiarized sources. Get your custom essay on
“ The Key Idea of Eternal Sunshine of the Spotless Mind ”
Get custom paper
NEW! smart matching with writer

” Wilonsky was most impressed with elements of the film that were quintessentially art cinematic. Others, however, found to piece to be a brilliant adaptation of the classical Hollywood narrative. Glenn Whipp of the Los Angeles Daily News was most captivated by the story and its thematic elements as they were presented in the piece, calling the film “a strikingly affecting look at love, life, and memory that gives us one of the great movie love stories ever told.

Disagreement among film critics over the proper classification of “Eternal Sunshine” is no enigma. The apparent schizophrenic nature of the film boasts characteristics of both European art cinema, as defined by David Bordwell in his article, “The Art Cinema as a Mode of Film Practice,” as well as classic Hollywood narrative. Gondry and Kaufman intertwine some of the most intrinsic features of both styles — ambiguity and closure, character emphasis and presence of a goal, and deviance from and conformity to classical Hollywood — to create a complex combination of the two schools of film.

The resulting hybrid results in a piece that is both fresh and unobtrusively familiar to viewers and critics alike.

The first two concepts fused by Gondry and Kaufman are ambiguity, a key feature of art cinema (according to Bordwell), and closure, a fundamental aspect of the classical Hollywood narrative. In “Eternal Sunshine,” there is the potential for confusion due to lingering vagueness throughout much of the film. Viewers accustomed to the classical Hollywood narrative style of linear, causal relationships find themselves puzzles as scenes and entire sections of the story are placed non-chronologically in the film. Bordwell asserts that “in regards to art cinema, the puzzle is one of plot: who is telling this story? How is this story being told? Why is this story being told this way?”

The opening scenes of the film serve as its very conclusion; however, the viewer is unaware of this until the end. It is at this point when, true to classical Hollywood form, there is a strong sense of closure as loose ends of both the sub-plot and the major plot are resolved. Bordwell’s definition of art cinema includes “an open and arbitrary ending,” yet this is hardly what we encounter at the conclusion of “Eternal Sunshine.” Mary (Kirsten Dunst) learns of her memory erasure following her relationship with Dr. Howard (Tom Wilkinson) and attempts to minimize damage done to others by sending files to other patients. After the story’s central characters, Joel (Jim Carrey) and Clementine (Kate Winslet), learn of their own procedures, they rediscover their love for each other and decide to begin their relationship anew. Although the viewer may be somewhat lost at various point of the film, the futures of the characters are relatively unambiguous at the conclusion.

Other elements of the two distinctive film styles that act in unison are the strong emphasis on character interaction and the presence of a clear goal. The former is a key attribute of art cinema as defined by Bordwell, who states that “characters and their effects on one another remain central.” The salience of the interaction between Joel and Clementine in “Eternal Sunshine” epitomizes this characteristic. The film’s very foundation lies on the link between these two personalities. Ironically, the crux aspect of Joel and Clementine’s relationship is in fact a characteristic of classical Hollywood films, which involve characters with “clear-cut objectives” (Bordwell). As the story unfolds it becomes clear that Joel ha a well-defined goal to salvage his memories so that he may revive his lost romance with Clementine. Although the interaction between the lovers is omnipresent, Joel’s ultimate aspiration remains relevant. This fusion supports the duality of “Eternal Sunshine” as it fuses a character-driven plot with a definitive goal held by a least one of the personalities.

Perhaps the most important characteristic of an art cinema film, as explained by Bordwell, is that “the authorial code manifests itself as recurrent violations of the classical norm.” In these works, the director is extremely proactive in various creative adaptations of the film, such as “an unusual angle, a stressed bit of cutting, a prohibited camera movement, [or] an unrealistic shift in lighting or setting.” Gondry incorporates a large number of these idiosyncrasies into the film. Shaky, amateur-esque camerawork, the repeated use of close-up shots as well as the frequent shift in focus — from crisp to blurry and back again — allow Gondry to place his own directorial stamp on the film.

Whereas this stylistic feature reveals a deliberate deviation from the classical Hollywood norm, there are also aspects of the film that conform to the standard. In his article, Bordwell advances the claim that art cinema films fundamentally lack “identifiable stars and familiar genres.” In “Eternal Sunshine,” however, both of these components are evident. Jim Carrey, Kate Winslet, Kirsten Dunst and Elijah Wood are all prominent Hollywood players who have acted in large-scale productions: “Ace Ventura,” “Titanic,” “Spiderman” and “Lord of the Rings,” respectively. It can also be observed that beyond the film’s stylistic elements lies a classic love story, a genre that has proven both identifiable and recognizable to the public.

The apparent dilemma faced by Gondry and Kaufman is one faced by many filmmakers who strive to create a worthwhile and original film that, while in addition to being an innovative work of art, will also capture the attention of the masses. These two goals seem to be mutually exclusive, as works of European art cinema run the risk of intimidating the general public and classical Hollywood films tend to promote conventionality over artistic integrity. To resolve this issue, the film’s masterminds integrated aspects of both art cinema and classical Hollywood narrative to create an original fusion of the two styles. Gondry and Kaufman are not alone in this strategy. In recent years this very trend has garnered much popularity in the film world. Other “commercialized” art cinema films like “Donnie Darko” (2001)”, “Lost in Translation” (2003) and “Garden State” (2004) have proven to retain a unique format while still securing a broad viewership.

The Key Idea of Eternal Sunshine of the Spotless Mind. (2019, Aug 19). Retrieved from http://studymoose.com/the-key-idea-of-eternal-sunshine-of-the-spotless-mind-essay 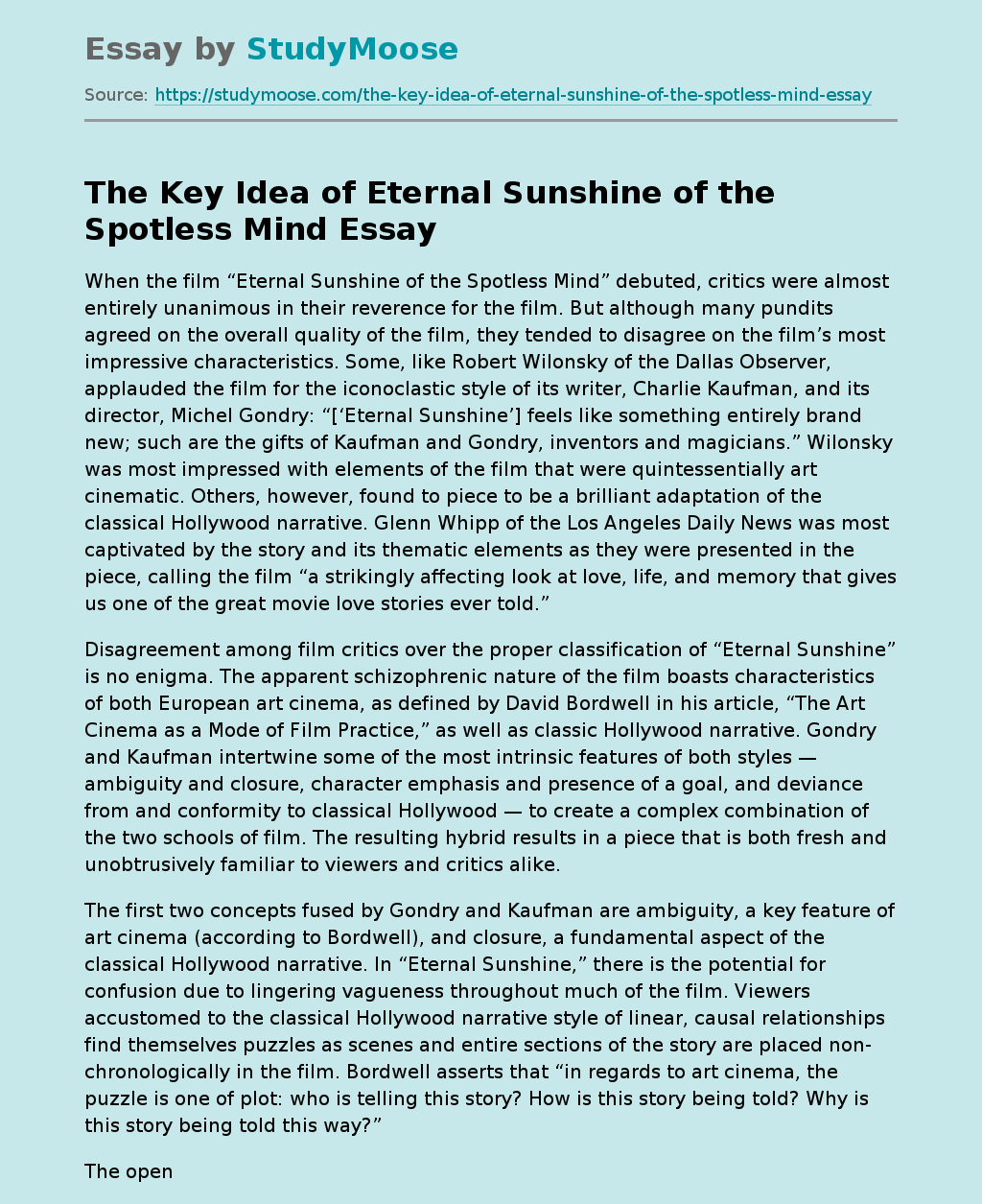