Today’s grocery store brands have expanded so much. There seems to be two to four brands of the same type of product. If one was standing in the aisle of condiments and needed to get ketchup, they have many brands to choose from. However, the one that would most likely stand out is the ‘Heinz’ ketchup bottle. The Heinz ketchup bottle has been out for years and it has so much history behind the name. Henry John Heinz didn’t start out with ketchup; he actually started out with bottled horseradish.

Don't use plagiarized sources.
Get Your Custom Essay on The Ketchup King Just from $13,9/Page

C. Noble and began by selling bottled horseradish. And this bottled horseradish was different from other bottled condiments because it was in a clear bottle, revealing its purity. H. J. Heinz was all about the purity in foods and how fresh foods keep you healthy.

It wasn’t until 1876 that ketchup, or better known as “catsup” was introduced to the product line. At that point H. J. Heinz really began to shine. He went on to London and opened various manufacturing plants to start selling his various condiments which included horseradish, pickles, vinegar, and more. H. J. Heinz brought a lot to the table with his sense of marketing intelligence. Researching H. J. Heinz and his company, I would say that H. J. Heinz wanted to create a consumer product as well as a convenience product. A consumer product is basically bought by a final consumer for personal consumption.

And a convenience product is when customers usually buy a product frequently, and with a minimum of comparison. Mr. Heinz definitely created these types of products because people love ketchup, pickles, and relish, etc. and those products are bought by everyone. Also, when one walks into the grocery store and looks for these types of products they most likely tend to go towards the Heinz ketchup bottle or the jar of relish. This ties into the marketing concept of packaging which involves designing and producing the container or wrapper for a product. Mr. Heinz definitely id a great job by choosing the design for his packaging of his products.

“With Heinz’s “fridge-door-fit” bottle, sales jumped 12 percent in the four months following its introduction. This type of innovation packaging was extremely helpful to the consumer and the company. It helped consumers because it is a large bottle that fits in the door of a refrigerator which saves space. And it helped the company because of the sales that it made just from the type of packaging that they produced. In the year of 1892 the Heinz Company coined the phrase ’57 Varieties’ that really spiced up the company.

This was quite interesting being that the company had over 60 products and they chose to stick with the number ‘57’. He had vinegar, soups, pickles, horseradish, and more. These products were selling so fast because they were pure foods, according to the Pure Food and Drug Act when it was passed in 1906. This was another thing that helped the company because it informed people that the products that they were buying were pure foods and not chemically processed. Another thing that made H. J. Heinz’s company so successful according to marketing history was his ability to globally market his products.

Mr. Heinz took his products and made them popular around the world. According to research, he started out in London in 1886 to start marketing his products, making his first sale abroad to London’s, Fortnum & Mason. Then by the 1900’s he had traveled to Africa, Australia, Europe, and South America. During that time his marketing and advertising skills become even cleverer. He traveled to New York City and put a large billboard up to advertise his famous slogan that won his a reputation as an advertising genius. Merchandising also made him well-known throughout the world.

He was crowned the “pickle king” because he sold pickles and he also came out with the pickle pins that everyone had to have. Mr. Heinz was great in the advertising field as well because he put up huge billboards of his name, had electric signs, and even published things in magazines and newspapers. “Mr. Heinz did everything he could to get his products out and he did not allow his own religious convictions to interfere. His advertisements never ran on Sunday’s and his factories were considered models because of the cleanliness and way he treated his workers.

This was a great thing because a lot of facilities were not like that and he even had tours at his factories, showing people that he was hiding or ashamed of anything. During the 1920’s when the Great Depression was going on he began having trouble so his son Howard Heinz came up with some aggressive moves to save the company. The company added two new products which were baby food, and ready to serve soup. He also increased advertising and promotion, and cut costs but no wages. These types of characteristics in a company really show a lot about how the business functions and how it can continue to grow.

Heinz developed a more formal marketing strategy and stuck to those rules very closely, in the end, making him and his business one of the most well-known for his strategies in marketing and advertising. All in all, Mr. Heinz contributed a lot to the world of business. A lot of companies could learn a lot from this man and his successful company. From all my research it seems that it’s not just how you market a specific brand or product but there are so many other different factors in being successful. Have clean facilities, treating employees well and so on really can make a difference.

A lot of businesses may not go international because they don’t want to take risks of failing but in the world or business, everything means taking a risk and that is what this company did. They had some flops here and there with products, but they kept trying and now they are one of the most well- known companies around and they will continue to strive. As long as they continue what they are doing and continue using the same marketing strategies, they will stay successful as well as continue to be a part of history in the world of marketing. 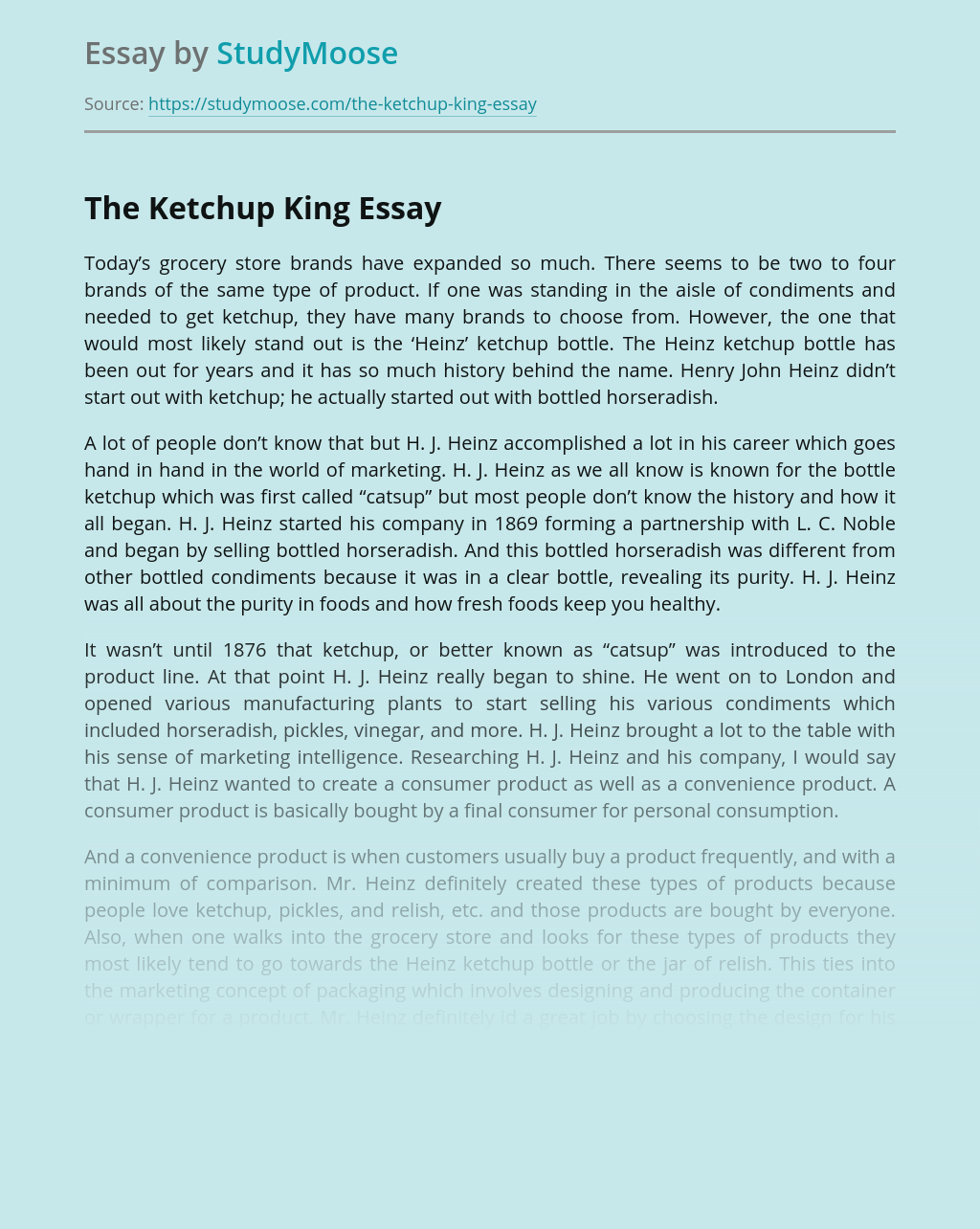 By the end of your reading, you should be able to answer the following questions: 1. What do you understand by the term Corporate Social Responsibility (CSR)? 2. Explain two actions that Amway and its IBOs are currently taking that involve CSR. 3. Analyse the key ingredients in Amway’s CSR strategy. Show how the strategy...

Marketing Plan of Bentley Motors Limited 1. Executive Summary 2. Company Description Bentley Motors Limited is a British Manufacturer of automobiles, founded on the 18th of January 1919 by Walter Own Bentley. In the First World War, Bentley was known because of their rotary aero-engines. After the war Bentley designed and produced cars that won...

These information will be mentioned and it is used to prepare for the major business report. Retrieved from http://www. shangri-la. com/en/corporate/aboutus/overview Table of content Introduction An international hotel is the hotel that has a chain in many countries but not just in one country. To compare with the normal hotel, international hotels are easier to...

By using the same supplier means that DPS have to follow what the competitors such as Coca Cola and Pepsi have done for the worldwide market in particular in US. This may cause costs to grow in the future but the supplier could have the advantages in producing their product by using own distribution and...

You are asked to address the following questions: 1. Who are the principal target segments for Red Bull and how are they positioned towards these target segments? 2. Analyse the Red Bull brand using any frameworks you judge appropriate. 3. Comment upon Red Bull’s pricing approach 4. Evaluate Red Bull’s distribution channel strategy 5. Would...