The 'Judge's House' and 'The Monkey's Paw'

The two stories, ‘The Judge’s House’ and ‘The Monkey’s Paw’ were both written in the Gothic genre in Victorian times, in the 1900’s. Because of this both stories are influenced by Victorian attitudes to horror. One of the main ideas in both stories is to create a sense of suspense. This is done so effectively that in certain moments the stories send a shiver down our spines.

Don't use plagiarized sources. Get your custom essay on
“ The ‘Judge’s House’ and ‘The Monkey’s Paw’ ”
Get custom paper
NEW! smart matching with writer

This is what Victorian people were looking for in a horror story. Another Victorian attribute of the stories is the fact that they were serialised and so the full stories are in sections. The gothic genre also influenced a lot of the story. They are full of gothic techniques the most obvious being the use of pathetic fallacy. This the technique used that makes the weather mimic the feeling of the characters.

Proficient in: The Monkey'S Paw

There are also any other writing techniques used such as alliteration, personification, sound effects, use of sentence length, description and imagery and use of speech.

‘The Judge’s House’ is set at night in a rural isolated house which is very big and deserted. Abstract nouns add to the sense of mystery in the house – ‘desolation’ is an extreme noun – suggesting utter hopelessness. The story is set in the same time as it was written; Victorian England. Pathetic Fallacy is use to great effect in this story.

It is set at night and there is a storm going on most of the time. In times of great panic ‘A dreadful peel of thunder’ breaks out. At this point we can almost feel the terror ‘Malcomson’ is experiencing and we get a shiver down our back. This is a very gothic technique. The gothic techniques such as this are enhanced by the extensive description used by Stoker. There is also huge Victorian influence on the story due to the time it was written in.

Stoker uses many different techniques of description in ‘The Judge’s House’ and one of them is personification. This is not specific to the gothic genre but is used to great effect in this story.’…sat an enormous rat, steadily glaring at him…’ The rat is doing human thing such as sitting. Normal rats do not sit they lie down and they do not glare with baleful eyes. This indicates that the rat is intelligent a very human characteristic and this seems scary, especially for Victorian people because there was no hygiene and rats where everywhere in those times. The rat is also described as a ‘devil’ this makes us even more scared of it later in the story. The rat, one of the main evil characters is described very vividly as a demonic creature. Also people were very superstitious in those times.

In this story the main evil characters is this rat and the judge. The judge is compared to a corpse with ‘icy fingers’. This makes us scared of him and makes us think he is coming back from the dead which in those times were a subject around which there were many rumours. This gives us a sense of utter hopelessness when we know the truth about the judge and we can predict what he is going to do with Malcomson.

This is a very good way of adding a sense of fear and tension to the story. Also in the story the doctor serves the job of telling us the story of the house. This adds a sense of mystery to the house and makes us fear what is inside if everyone is so scared of it. The doctor gives us a 3rd person account of what is happening in the house and therefore we find out a ‘blurred’ image of what is really happening

The doctor also foreshadows the events in the story ‘We shall hear the great alarm-bell from the Judge’s House tonight’. This adds a lot of mystery because it gives us a vague idea of what is going to happen and, as predicted, later in the night Malcomson is found hanging on the alarm-bell rope, ringing the bell. Mrs Dempster gives us a very bad impression of the house at the beginning. It creates an atmosphere of mystery and the fact that she is ‘evidently curious’ of the house makes us wonder what is inside and creates suspense. However, the pause, when she thinks about it she changed her mind. ‘Somethings’ Makes us wonder what is inside and how many. This adds even more to the sense of mystery and fear of what is inside the house. Also the previous ‘Somethings’ makes us remember her suspicions when all the rats appear.

Malcomson is a very reckless character in the story. Despite everyone’s warnings to not go inside the house he does. ‘Not in the Judge’s House!’ and in the end he dies because of this. However, by giving this quality to Malcomson, Stoker increases the sense of fear for Malcomson during these moments. This is very effective.

‘The Monkey’s Paw’ is written at roughly the same time as ‘The Judge’s House’ As well as that ‘The Monkey’s Paw’ is also set mostly at night, however, there is one scene in the morning just as in ‘The Judge’s House’. As well as that they are both set outside big cities. This is a traditional gothic setting because it means they are isolated and this means they cannot rely on outside help to assist them in the dangers they will face during the story. Also ‘The Monkey’s Paw’ is also written with huge influence from Victorian writing styles Finally both stories take place inside a building most of the time. This is often use in the gothic genre because it again crates a sense of isolation and therefore increase our fear of something happening during the story.

Many of the same writing techniques are used in both ‘The Monkey’s Paw’ and ‘The Judge’s House’. The first technique used ‘The Monkey’s Paw’ is alliteration. This is used in great affect to describe the messenger bringing the news of the family’s dead son ‘She was watching the mysterious movements of the man outside…’ This draws our attention to the stranger and we start to realize he is very important. As we know he is important and because of this he creates a fear of the news he is going to bring.

Personification is used to great effect in both stories. In ‘The Monkey’s Paw’ it is used to describe the knocking ‘…a knock, so quiet, so stealthy’ of course we know that knocks cannot be stealthy but it gives us an impression the knock is a person. It is as if a person is in their house. This creates a sense of mystery and fear because we can only suspect who is knocking and we want to know who it is.

The use of pathetic fallacy is also present in both stories. In The Monkey’s Paw the weather is both good and bad. On the first night ‘The night was wet and cold.’ And on the next morning the weather gets good again ‘In the brightness of the wintery sun next morning…’ The weather then get worse coming up to the sons dead body comes to the door when it is pouring again. This creates suspense because we know that bad weather does not bring any good.

The use of sounds is also used effectively in The Monkey’s Paw. The knock gets louder and is personified towards the end of the story. The knock increases our sense of mystery and fear because we want to know who is knocking and it is described very well and therefore is one of the main events in that part of the story. The whole final section is based on the knock ‘reverberating’ around the house.

The stories are written from different perspectives. In ‘The Judge’s House’ the narrator is always with Malcomson. The story is based on what Malcomson does. ‘The Monkey’s Paw’ is based around the house. These are both used effectively. ‘The Judge’s House’ makes us closer to Malcomson and therefore more afraid of what is going to happen. In ‘The Monkey’s Paw’ the narrator manages to hide certain facts from us. This is effective because at first the narrator hides details from us and then reveals them after creating suspense beforehand. It is a very skilled way of creating tension and quickly releasing it.

In conclusion both stories are written very well and use a lot of writing techniques to great effect. They both create a big atmosphere of mystery and fear in the stories using lots of writing methods to achieve this. Both these stories show a good use of the gothic genre in horror stories.

The 'Judge's House' and 'The Monkey's Paw'. (2017, Nov 09). Retrieved from https://studymoose.com/the-judges-house-and-the-monkeys-paw-essay 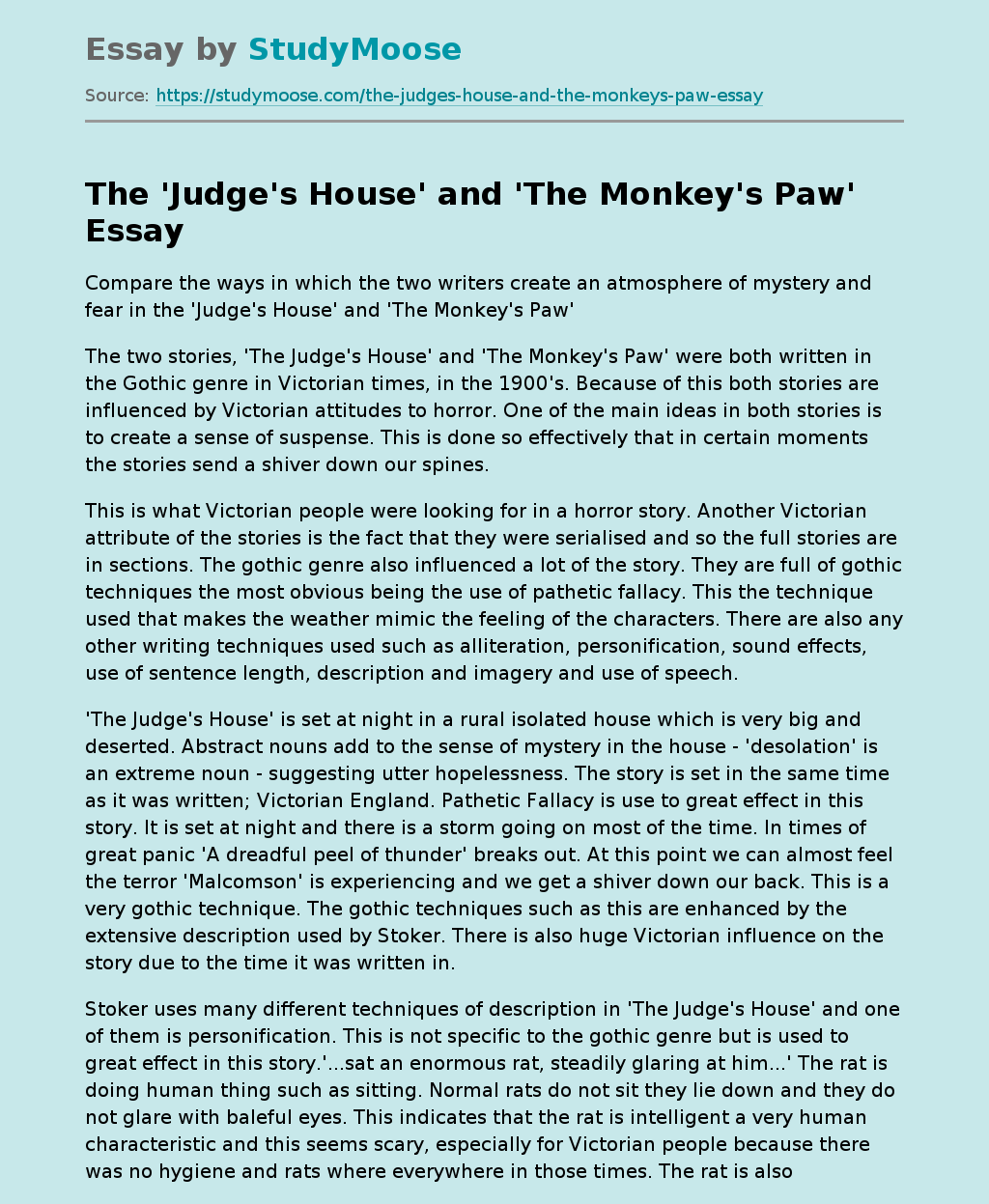