The Journey Of My Ancestors Essay

It was a long windy night on the thick sandy Saharan desert. .

It was the beginning of a never ending journey……..well so they thought.

It had come and gone again………….the war… the war that had killed men, women and children.

It was a war coursed by greed, selfishness, betrayal and unforgiveness.

They had been walking without water, food for almost three days and every mile they went children and women collapsed to death.

They had traded all their belongings for water and fruits but that wasn’t enough to last then through the windy night.

Don't use plagiarized sources.
Get Your Custom Essay on The Journey Of My Ancestors Just from $13,9/Page

Sand blew into their eyes like it was being chased by the wind and tears poured out to the testy desert.

The King of Timbuktu had ordered them to fight till it was all over, they had to because their lives where in their own hand.

While they fought they wondered what had gone wrong, what had caused this fight, a fight that was tiring their lives apart.

Days had gone by without food and water but what could they do about it, nothing could be done about that, at least not until their enemies were all dead and gone.

As they made their way across they desert and through the stormy weather all they could hope for was a land a land on which they could find peace, where they lay their heads and sleep without being woken by the war drum, a land were their wives and children could find peace and joy, a land full of nature’s finest, a land that will bring up a whole new generation and a land far from the other side of the world.

They had been traveling for six days and finally the land that they have been dreaming of……….there it was standing right in front of them

Their journey had finally ended and now they could look forward to a new beginning and a peaceful life.

The Journey Of My Ancestors. (2017, Aug 22). Retrieved from https://studymoose.com/the-journey-of-my-ancestors-essay 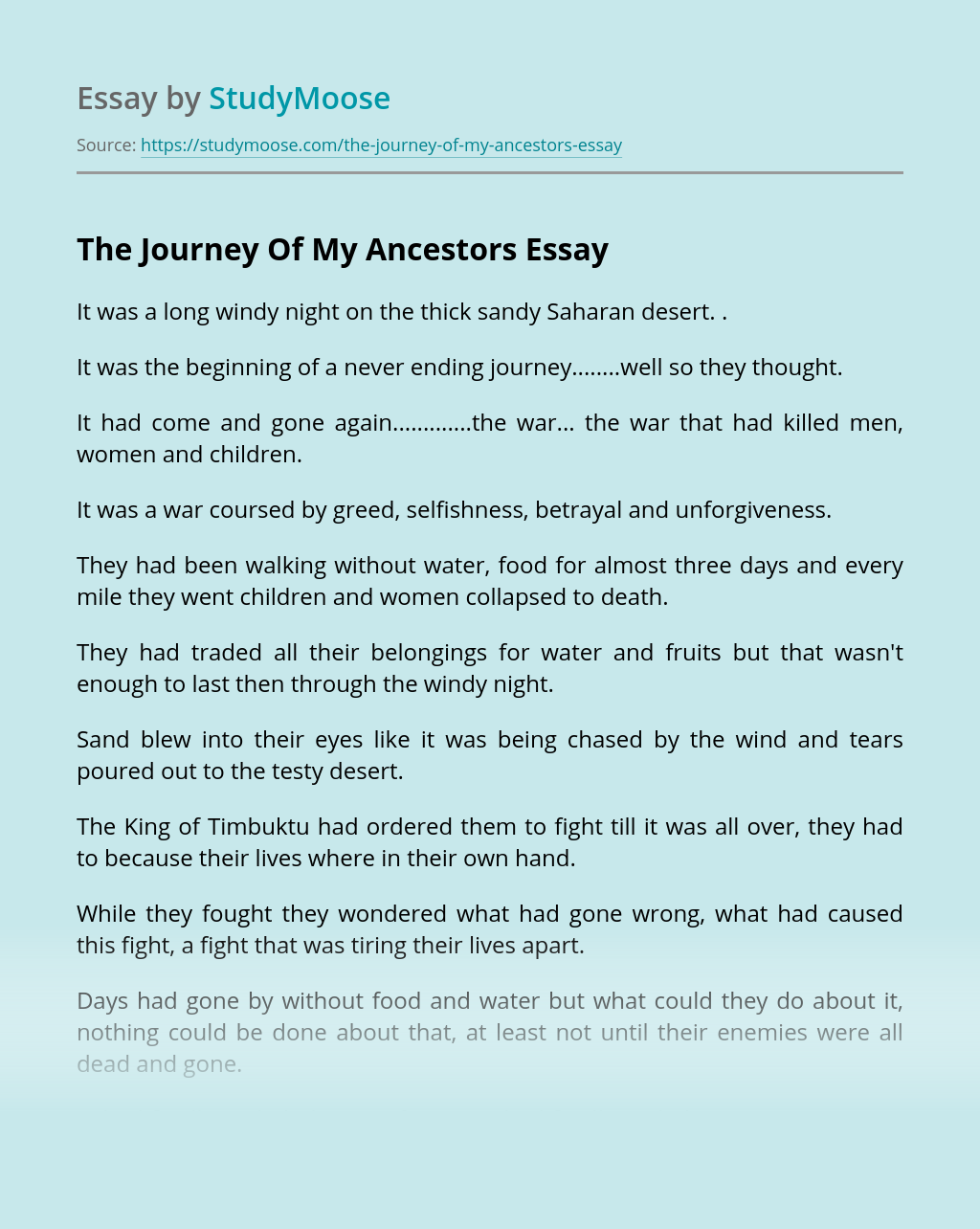 ? Economic experts assume that there are a number of various purchasers and sellers in the marketplace. This indicates that we have competition in the market, which enables price to change in reaction to changes in supply and demand. Moreover, for nearly every product there are alternatives, so if one item ends up being too... VIEW ESSAY

“Male” appears to have actually been rather a disregarded topic in the history of Western philosophy; more attention has been paid to God and universe than to man. Though there are lots of reputable histories of the specific branches of approach; and even of a few of its unique subjects such as logic ethics, aesthetic... VIEW ESSAY

The novel, Deadly Unna, written by Phillip Gwynne tells the story of the multicultural bond between the Aboriginal up and coming football player Dumby Red and his loyal Australian mate Gary (Blacky) Black. There are many issues explored in the novel, such as family, domestic violence and above all, racism. Moreover, the novel demonstrates the... VIEW ESSAY

Poetry can evoke a wide spectrum of emotions ranging from sadness to exultation through the poet’s manipulation of the 5 primal senses; sight, sound, taste, smell and touch. This essay shall explore the emotive language used by Great War poets in order to evoke the senses in the reader, so that the more abstract issues... VIEW ESSAY

In inclusive education programs all students in a school are subjected to study together and become part of the school community regardless they are disabled or normal (Schwartz, Odom, & Sandall, 2010). They all attend the same school and have the feeling of belonging in the school. Students, teachers and co-ordinate staff have a role... VIEW ESSAY