?As Debra Spark says in her introduction, Bernard Malamud uses “fairy tale, myth and magic” not to distract us from reality, but “lead [us] to it in the most profound way. ” Imagine us diving back into the words of our favorite childhood fairy tales and stories, letting them lead us to examine our own reality in a way we didn’t know how back when we were children. Malamund allows us to do that with his stories “The Magic Barrel,” “The Last Mohican,” and “The Jewbird.

Don't use plagiarized sources. Get your custom essay on
“ The jew bird ”
Get custom paper
NEW! smart matching with writer

” His use of magical realism allows us to see our reality through these stories of magic and mystery.

Malamund also has the unique ability to draw us in to the plaight of his characters, even us readers who are not Jewish. When his mother asked why a non-Jew would want to read his stories, he famously replied that “All men are Jews. ” In that, we all suffer in various ways, either by our unique ethnic background, gender or class.

We live, therefore we suffer, according to Malamund. We have characters that have forgotten their Jewish past, such as Cohen in “The Jewbird” and Fidelman in “The Last Mohican.

” We have the “Old Jews” such as the lonely rabbi in “The Magic Barrel,” and the union of him with the fallen rabbi’s daughter. These stories show that one must find a balance between the ways of the past and the ways of the present. Malamud accomplishes that by creating stories that all people, oppressed or not, will be able to read, enjoy and learn from.

Comments by other ppl The most interesting, and the most outwardly supernatural or fantastical, story was The Jewbird. A ragged, crow-like bird seeks refuge with a family while running from some “Anti-Semeets”.

Generally, I got the impression that the bird was supposed to be the old Jewish grandfather that the grandkids really like but the adults just tolerate and have to take care of. They don’t treat him very well, especially the father, even though they also seem to be Jewish themselves based on the occasional Yiddish, perhaps representing the generational gap between n the older and younger generations. I’m not sure what being a bird is supposed to represent, but that was the impression After reading The Jewbird, I am not sure which of these pieces is my favorite.

This is certainly the most unique of the three. Unlike The Magic Barrell and The Last Mohican this story does not rely on reality at all. It is pure fantasy. It is darkly comical and I found it fucking hilarious, to be honest. Malamund is definitely playing up Jewish stereotypes by naming the bird Schwartz. Moreover, I really love he is just Schwartz. Hell, sometimes, he’s even Mr. Schwartz. This piece does, in the end, take a dark turn, as Schwartz is violently thrown out of the house. As in the other pieces, I do question identity to a certain extent.

We are caught gaping at the violence of Harry Coehen and his apparent disregard to his own culture. That is perhaps the most shocking part of this piece: Harry Cohen is so afraid of his own culture that he cannot consent to Schwartz’s own Jewishness. Bernard Malamund’s stories are all fantastic. The subtle creepiness drives them before an explosion of fear overtakes the reader right before the ending. These three stories were all thrilling in their own ways. I got from it. The Jewbird is is a summary of Bernard Malamud’s “The Jewbird.

” The story is an allegory demonstrating that a homeland for Jews was a humanitarian necessity. Israel must continue to exist as a safe haven for those who need one and for those who choose to make Israel their nation. During the Holocost, escaping Jews were turned away from the United States, Palestine (then occupied by the British), and most other countries. They had to return to the places from which they had escaped only to be exterminated. There was no safe haven. This is the reason that the Israelis must weaken or destroy Hezbollah and Hamas.

There is no other choice for them. “The Jewbird”. by Bernard Malamud Reporter, 28 (April 11, 1963), pp. 33-36. Major Characters: Schwartz: A crow-like talking bird that can speak Yiddish and English and even make Jewish prayers. He calls himself a Jewbird, once removed from a Jewfish. He is running from “Anti-Semeets” and flows in “Harry Cohen’s top-floor apartment on First Avenue near the lower East River. ” Harry Cohen: A frozen food salesman. “A heavy man with hairy chest,” whose mother is dying in her flat in the Bronx. Edie Cohen: Harry’s wife.

A kind-hearted skinny woman, not courageous enough to protect Schwartz from her husband. Morris Cohen: Harry and Edie’s ten-year-old son. He is named after her father but they call him Maurie. “A nice kid though not overly bright. ” According to Schwartz, he is a kind of boy that “won’t be a shicker or a wifebeater” and will never be a scholor but “maybe a good mechanic. ” Chronology of Events: “On a hot August evening a year ago”: Schwartz, a skinny bird, wearily flows in through the open kitchen window of Harry’s apartment [“That’s how it goes. It’s open, you’re in.

Closed, you’re out and that’s your fate. “] and lands on the table when the Cohens are having supper. The Jewbird tells them that he is running from “Anti-Semeets” and vultures and that he goes “where there’s charity. ” After “davening” he gets marinated herring. Although Harry does not want him to stay, he lets him stay the night because of Maurie: “Let him stay, papa…. He’s only a bird. ” “In the morning”: Cohen orders Schwartz to leave but Maurie cries, so he reluctantly lets the bird to stay for a while: “So all right,” said Cohen, “but I’m dead set against it.

I warn you he ain’t gonna stay here long. ” “What have you got against the poor bird? ” [said Edie. ] “Poor bird, my ass. He’s a foxy bastard. He thinks he’s a Jew. ” “What difference does it make what he thinks? ” “A Jewbird, what a chuzpah. One false move and he’s out on his drumsticks. ” Although Schwartz wants to stay inside, he lives out on the balcony at Harry’s insistence, in a new wooden birdhouse Edie gets for him. “When Cohen brought home a bird feeder full of dried corn”: Schwartz says, “Impossible” and Cohen is annoyed. Edie gets herring for him.

“When school began in September”: Cohen once again suggests the bird to leave but Edie prevailes on him to wait a little while until Maurie adjusts to school. Though nobody has asked, Schwartz takes on full responsibility for Maurie’s performance in school: he oversees the boy’s school lessons and violin practice. Maurie’s work improves in school and even his violin teacher admits his playing is better. When “there was nothing lower than C minuses on Maurie’s report card,” Schwartz celebrates with a little schnapps on Edie’s insitence. But he angers Harry not agreeing with his hope to send his boy to an Ivy League college.

“One night when Edie was at the movies and Maurie was taking a shower”: Harry begins a quarrel with Schwartz: “For Christ sake, why don’t you wash yourself sometimes? Why must you always stink like a dead fish? ” “Mr. Cohen, if you’ll pardon me, if somebody eats garlic he will smell from garlic. I eat herring three times a day. Feed me flowers and I will smell like flowers. ” “Who’s obligated to feed you anything at all? You’re lucky to get herring. ” “Excuse me, I’m not complaining. ” said the bird. “You’re complaining. ” …. “All in all you are a goddamn pest and free loader. Next thing you’ll want to sleep in bed next to my wife.

” “Mr. Cohen,” said Schwartz, “on this, rest assured. A bird is a bird. ” The quarrel deeply disturbs Schwartz and he sleeps badly. He tries to stay out of Cohen’s way and keeps to the birdhouse as much as possible. Sensing his unhappiness, Edie advises him to take a bath so that he can get along better with her husband. The bird’s reply: “Everybody smells. Some people smell because of their thoughts or because who they are. My bad smell comes from the food I eat. What does his come from? ” “In late November”: Schwartz freezes on the balcony, already feels twinges of rheumatism.

Cohen, after reading articles about the migration of birds, orders him to leave soon. But the bird stubbonly refuses to depart so Cohen embarks on a campaign of harassing him. He brings a cat into the house, supposedly a gift for Maurie. The bird complains but Edie only says: “Be patient, Mr. Schwartz. When the cat gets to know you better he won’t try to catch you any more. ” Weeks go by, “on the day Cohen’s mother had died in her flat in the Bronx, when Maurie came home with a zero on an arithmatic test”: Cohen, enraged, waits until Edie takes Maurie to his violin lessons, openly attacks the bird.

He grabs Schwartz’s leggs and whirls him around and around his head. The bird manages to catch Cohen’s nose in his beak. Cohen punches the bird and flings him into the night. “Schwartz sank like a stone into the street. ” “In the spring”: Maurie looks for Schwartz and finds “a dead black bird in a small lot near the river, his two wings broken, neck twisted, and both bird-eyes plucked clean. ” “Who did it to you, Mr. Schwartz? ” Maurie wept. “Anti-Semeets,” Edie said later. 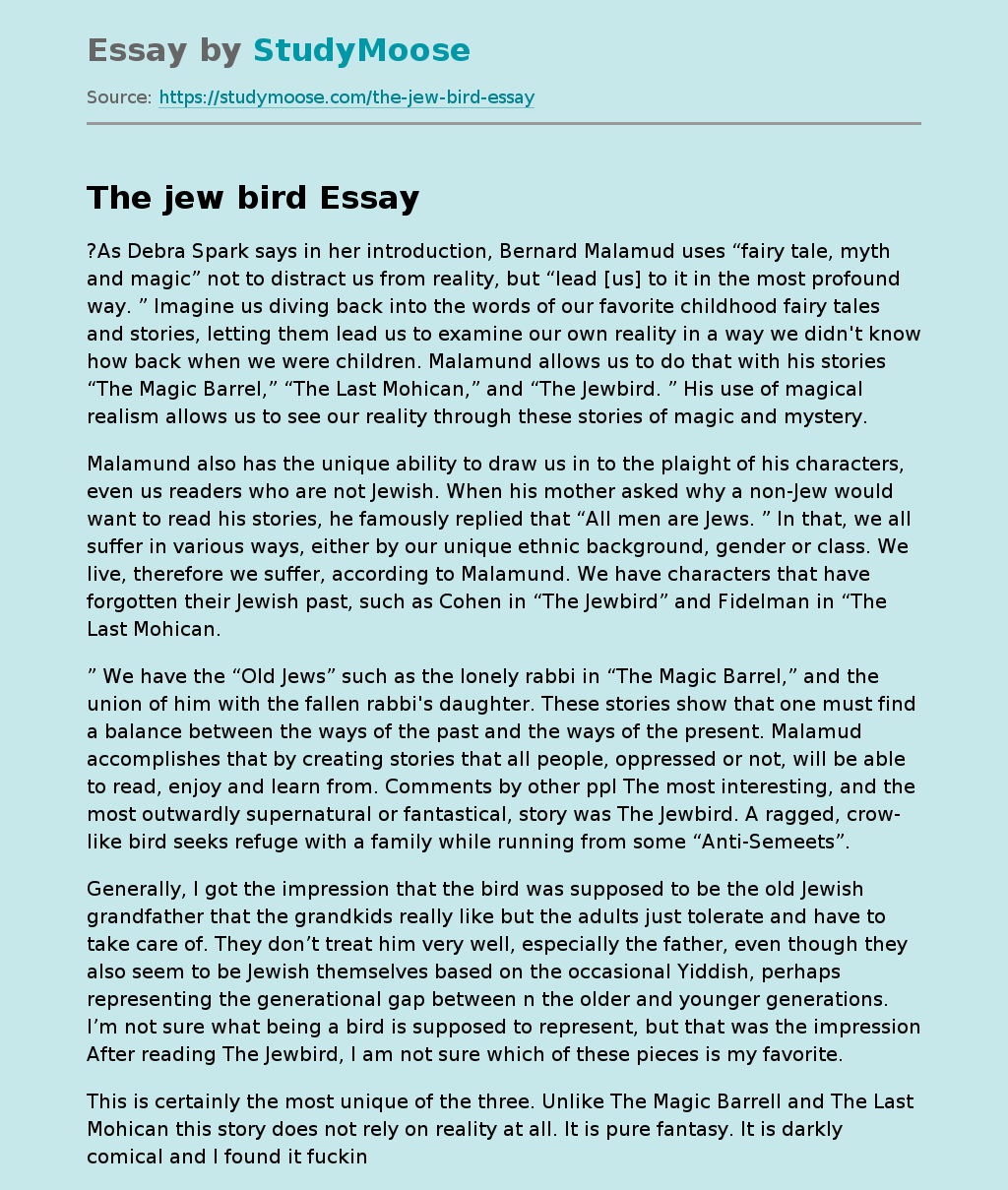