The use of detail of the gothic horror

Such as Enfield describes him “really like Satan”. This gives a sense that Hyde is allied with the devil, a strong supernatural force. This theme of supernaturalism is also revealed in ‘The Picture of Dorian Gray’ when Dorian pledges his soul if only the painting could bear the burden of age and infamy, allowing him to stay forever young. Throughout the novel, Stevenson goes out of his way to establish a link between the urban landscape of Victorian London and the dark events surrounding Hyde.

Don't use plagiarized sources. Get your custom essay on
“ The use of detail of the gothic horror ”
Get custom paper
NEW! smart matching with writer

He achieves his desired effect through the use of nightmarish imagery, in which dark streets twist and coil, or lie swathed in fog, forming a sinister landscape befitting the crimes that take place there. At the beginning of the novel, it is clear that Mr Enfield is “coming home from some place at the end of the world, about three o’ clock of a black winter morning”. ‘The Italian’ also uses this effect of night time as we read that a journey is being completed “in the last moments of departing light” through “the silent gloom”.

The crimes that took place in the streets

As for the crimes that took place in the streets, these include an unknown man who “trampled calmly over the child’s body and left her screaming on the ground”. This man is described as being “like some damned Juggernaut”. Also the other murder of Sir Danvers Carew is witnessed by a maidservant from her bedroom window. She describes how the victim, “an aged and beautiful gentleman” whom she did not recognise and who seemed to have “an innocent and old-world kindness of disposition”, encountered a very small man whom she did know, Mr Hyde.

In such images, Stevenson paints Hyde as an urban creature, utterly at home in the darkness of London – where countless crimes take place, the novel suggests, without anyone knowing. These malevolent murders bring up about the significant theme of mystery, which in turn overlooks much of the plot and keeps the reader in suspense. In ‘The Italian’ the knowledge to whom Ellena’s father may be also allows the reader left thinking in puzzlement. “Dr Jekyll and Mr Hyde” was significant to the time of it’s publish as it was at a time when the notorious ‘Jack the Ripper’ troubled the city of London inserting fear upon the public.

The use of detail of the gothic

The use of detail of the gothic setting in the novel evokes terror and fear. This is achieved as Stevenson carefully describes the place, weather, season, time, characters and the incidents in the jokes related by Mr Enfield. The effects of these descriptions build up a more ominous side to the story. Weather has a major impact of gothic tradition used in “Dr Jekyll and Mr Hyde”. There is an insertion of a few literary techniques which can be related with the weather theme. Pathetic fallacy – when the weather reflects the action of a novel – is one which is widely used in chapter 8, “The Last Night”.

One particular paragraph is shown on page 27 when the weather is described as being “a wild, cold, seasonable night of March, with a pale moon, lying on her back as though the wind had tilted her. ” Personification has been tied in with the usage of this quotation, and it gives the moon the characteristics that of which humans have. However, Stevenson narrowly inserts foreboding into this chapter as it is implied that something terrible is going to happen: “For, struggle as he might, there was borne in upon his mind a crushing anticipation of calamity.”

In ‘The Italian’ personification is evident.

Trees are described as throwing “their broad arms over the cliffs”. We can also notice how when Sir Danvers Carew is murdered, “a fog rolled over the city” and “the lane was brilliantly lit by the full moon”. It is clear that Stevenson wants to create a typical gothic tradition by the settings being gloomy and dark. Once again, the effect of this fog gives a vivid sense of foreboding, as it is not clear what might happen under the cloud of fog. It may be that something bad might arise.

This effect of fog is most clearly evident in Charles Dickens’ ‘Bleak House’. One whole paragraph is used just for the description of fog: “Fog everywhere. Fog up the river; fog down the river. Fog on the Essex marshes, fog on the Kentish heights. ” While on the subject of nature being described with human characteristics (i. e. personification), nature is also used as a Gothic theme. Nature is used in ‘The Italian’ to reflect “the appearance of the people” as they are described as being “as wild as their country”.

The effect of the landscape in ‘The Italian’ has taken its toll on the people and their appearance, and this can be related to “Dr Jekyll and Mr Hyde” as the city has taken its toll on the novel. Mr Hyde’s presentation is associated with the surroundings in which he lives in “a dingy street, a gin palace, many children huddled in the doorways. ” However, Dr Jekyll lives “round the corner” from Mr Hyde and his house is described as wearing “a great air of wealth and comfort”. One other major theme of Gothic tradition includes that of a secret or locked room, again providing the reader with a sense of mystery.

The use of detail of the gothic horror. (2020, Jun 02). Retrieved from https://studymoose.com/the-italian-includes-7634-new-essay 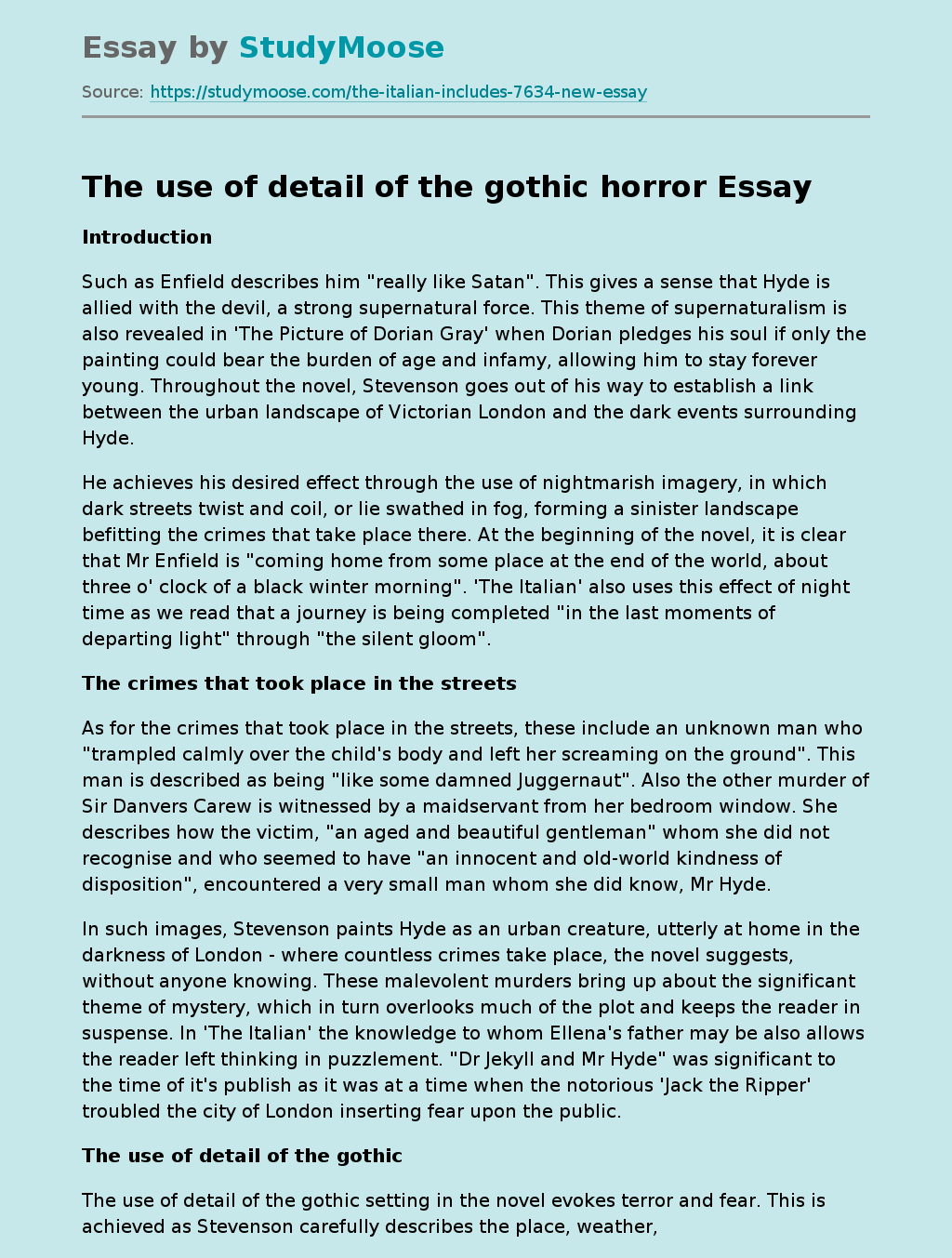