Privacy and security are two phenomenons that have become subject to discussions in the recent years. A discussion about security issues cannot go on without privacy matters. The two go hand in hand. Terrorism has become a global threat to the peace and stability of a number of nations. The challenge poses security threats to countries. The problem of security has forced security agents and government institutions to develop technology that will mitigate the problem of insecurity (Economist, 2008). There are a number of technologies that have been developed to help address the problem of insecurity.

Don't use plagiarized sources. Get your custom essay on
“ The Issue of Privacy and Security and the Use of Technology to Address the Problem of Insecurity ”
Get custom paper
NEW! smart matching with writer

Facial recognition software has been developed to help law enforcers identify suspects. Biometric equipment that captures the finger prints of people that enter major buildings in the city are used to do a background check of a suspected individual (Economist, 2008). Wendy Kaminer is a lawyer by profession who has also published several books. In the spring of 2002, she published an article titled Trading Liberty for illusions.

In the article the author argues that technology should not be used to victimize a certain group of people on issues relating to terrorism. On the other hand, the Economist is an insightful magazine that publishes trending issues. This article suggests that surveillance systems have proved an effective method of promoting security. Both Kaminer and The Economist rely are credible sources that apply ethos, pathos, logos and historical references to justify their points of view. However, the two articles apply different methodologies to gain the attention of the target audience (Kaminer, 2002).

Wendy Kaminer and The Economist have both showed great skills in their writings. Kaminer has written a number of articles demonstrating her exemplary career.

The Economist is an insightful magazine that features news from political, economical and social environment. Both articles appear to have been well researched. They apply historical events and quotes to justify their opinions. The use of quotes indicates that the authors took time to investigate the findings of previous authors who had conducted research in the area. However, the credulity of the two sources comes into question especially when it appears that they lean on side. Instead of creating objective argument, they are biased to the position they hold. Instead of dwelling on all aspects of security and privacy matters, they concentrate on how the technologies have been ineffective (Kaminer, 2002). The Economist and Kaminer both applied different means to appeal to the audience not to over rely on security technology as the only mechanism to solve the problem of insecurity. Kaminer used pathos and she suggests that, “Americans felt safer when immigrants were arrested after the September 11 attack” (398).

This is a mockery of the Bush administration that was clueless on how to deal with the security situation after the aftermath of the deadly attack. Kaminer argues that it is ironical that the Americans could have felt safer yet their country had been attacked and the terrorism threats still remained rife. The writer also launches a fierce criticism of the technologies such as the facial recognition system. She claims that, “The system could not identify the photographs of individuals whose data was in the database” (398). Kaminer is trying to disapprove the technology by questioning its credibility. In the real sense the system could not have been purchased without testing its functionalities (Kaminer, 2002). The author is just trying to allege that the system was not reliable. On the other hand applied pathos and ethos, The Economist begins the article with a rhetorical and sarcastic question.

“Suppose surveillance cameras identify a man who passes on a subway platform daily without taking a train, does that qualify him a suspected criminal? The author of the article is trying to suggest that surveillance cameras are not an effective way of identifying criminals because even the person monitoring the screens does not pay attention throughout the day. The author of the article does not have faith with surveillance cameras as a way of crime prevention. Further, the author gives opinions of different groups about the use of systems that use psychological reaction of suspects to determine whether they are guilty. A number of people believe that law enforcement units should be the final people who should be used to determine whether a suspect is culpable and not technology. The author responds to the claims contemptuously by suggesting, “Try telling that, though, to an innocent traveler who was in too much hurry”. The author is trying to dispute the assertion that the law enforcing units have the final say as to whether a suspect is innocent or guilty. They determine the guiltiness of a suspect using available technology which sometimes violates the right of the suspect (Economist, 2008).

The terrorist September 2011 attack on the US was emphasized by Kaminer and she believed that technology was misused and applied to violate a specific group of people. She cited the violation of people based on religion and political ideologies. She states “When Americans are attacked, they start persecuting people based on their religious affiliation and their political ideologies”. In doing so, Kaminer dwells on historical context to justify her position about the use of technology to promote security. She goes on to give historical accounts of American presidents, among them George W. Bush, who persecuted people who had different political opinions. The historical occurrences are a clear indication that the American government does not respect the privacy of an individual especially when it is deemed that the person is a threat to national security. The author is also trying to suggest that violation of the privacy of an individual did not start recently; it started during the era of the founding fathers of the nation.

Hence, although the constitution of the country safe guards the right, the Federal and State government do not honor the requirement (Kaminer, 2002). The Economist on the other hand dwells on recent initiatives for instance use of full body scanners that are being made to improve the current security systems. The author claims, “FAST is an efficient security system that is under development” (Economist). The author appears to have deviated from his introduction where it had been claimed that the current security systems violates the privacy of an individual. Both authors agree that security systems that have been developed through technological innovation infringe on the rights of an individual. They apply rhetoric devices to support their point of view (Economist, 2008). However, they differ on some issues. Kaminer gives the disadvantages and the instances of violation of human rights and privacy and therefore, she Kaminer that the security systems have traded the liberty of an individual. The Economist on the other hand gives both pros and cons of technology. Thus to a greater extend supports the application of technology to curb security matters (Kaminer, 2002).

Technology is an effective method that can be used to curb insecurity, but comes with its limitations. People believe that these technologies are a solution to the problem of the security that many nations face in the current decade. They feel that the technologies are important because they can help law enforcers identify suspects, find forensic evidence and help in crime prevention. Security systems violate the privacy of individuals something that is taken for granted. Issues of privacy have been raised on the use of these modern technology equipments. For instance, CCTV cameras installed in bathrooms and toilets have been used to curb terror suspects since they cannot take advantage and execute crimes in privacy. But on the contrary, they violate the rights of an individual by exposing the nakedness of an individual in a washroom.

Also biometric security systems help security personnel to curb terrorism and on the same note, data can be used by third parties without the consent of an individual. Such behavior invades the right of an individual. This essay sort to argue that both articles apply rhetoric devices to support their view points about the use of technology to control insecurity. The Economist presents a more effective argument on the issue of privacy and security. It is justifiable when the privacy of individual is violated to protect the lives of citizens. The articles bring into light a case of the ticking time bomb where many would agree that the safety of a large group of people supersedes the rights and privacy of an individual.

The Issue of Privacy and Security and the Use of Technology to Address the Problem of Insecurity. (2021, Oct 10). Retrieved from https://studymoose.com/the-issue-of-privacy-and-security-and-the-use-of-technology-to-address-the-problem-of-insecurity-essay 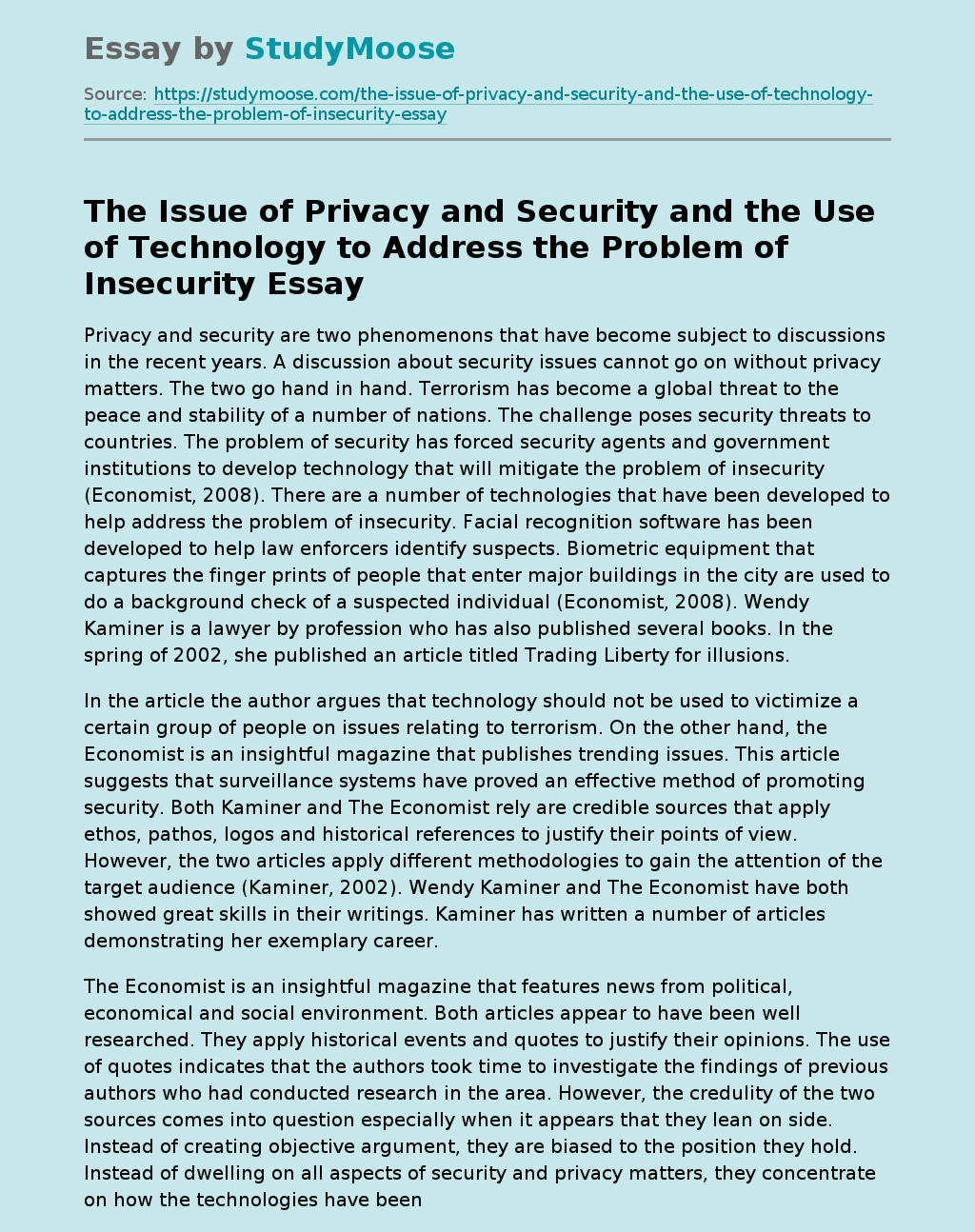