The Issue of Firearms

All guns have the potential to be dangerous and should be dealt with precaution. Guns have been a part of American history for as long as people can remember. For most individuals guns are supposed to be very dangerous and unsafe. Though, that is not true. Guns can be hazardous, but only if they are in the wrong hands. Owning a gun is a right that every American should take pride in having. Guns are used for self-protection, hunting, law enforcement and other practices.

Don't use plagiarized sources. Get your custom essay on
“ The Issue of Firearms ”
Get custom paper
NEW! smart matching with writer

The right to own a gun is secured by the 2nd constitutional amendment. So, prohibition of guns from being owned or bought is immoral and unconstitutional. Gun control in the United States should be eliminated. To get a gun, one would have to go through an exam to get a license to own and use a gun, and you wouldn’t be able to get one if you have any criminal record and you would also need to be a responsible adult.

And, if the government bans guns, only criminals will have access to them since they already get them from drug dealers. Therefore, when confronted by a criminal, civilians would have no way to defend themselves.Argumentative Essay against Gun Control Since 1980, forty-four states have passed laws allowing gun owners to carry concealed weapons outside their homes for personal protection. (Five additional states had these laws before 1980. Illinois is the sole holdout.) A federal ban on the possession, transfer, or manufacture of semiautomatic assault weapons, passed in 1994, was allowed to expire in 2004.

In 2005, Florida passed the Stand Your Ground law, an extension of the so-called castle doctrine, exonerating from prosecution citizens who use deadly force when confronted by an assailant, even if they could have retreated safely; Stand Your Ground laws expand that protection outside the home to any place that an individual “has a right to be.” Twenty-four states have passed similar laws. Guns, therefore, are necessary in today’s society for our protection

There is no point to implement gun control considering the reality that criminals will still find a way to procure guns if they want to do so. Criminals will always make sure to have access to the guns that they need to execute their crimes successfully. They usually have connections to other influential people that can provide them with the guns and weapons that they need in order to execute their crimes. The bottom line is that if the criminals want to have access to guns, they will be able to get them even if there is a gun control policy in place. This law will not stop them from having guns if they are desperate to have them.

Implementing a gun control policy will not really be effective in making all guns vanish in society. This policy will also not do anything to make guns safer in society. The reality is that guns have become necessary at present so that people can safeguard themselves, their families and their properties from any harm or danger that could be done to them by criminals.

The Issue of Firearms. (2016, Feb 29). Retrieved from http://studymoose.com/the-issue-of-firearms-essay 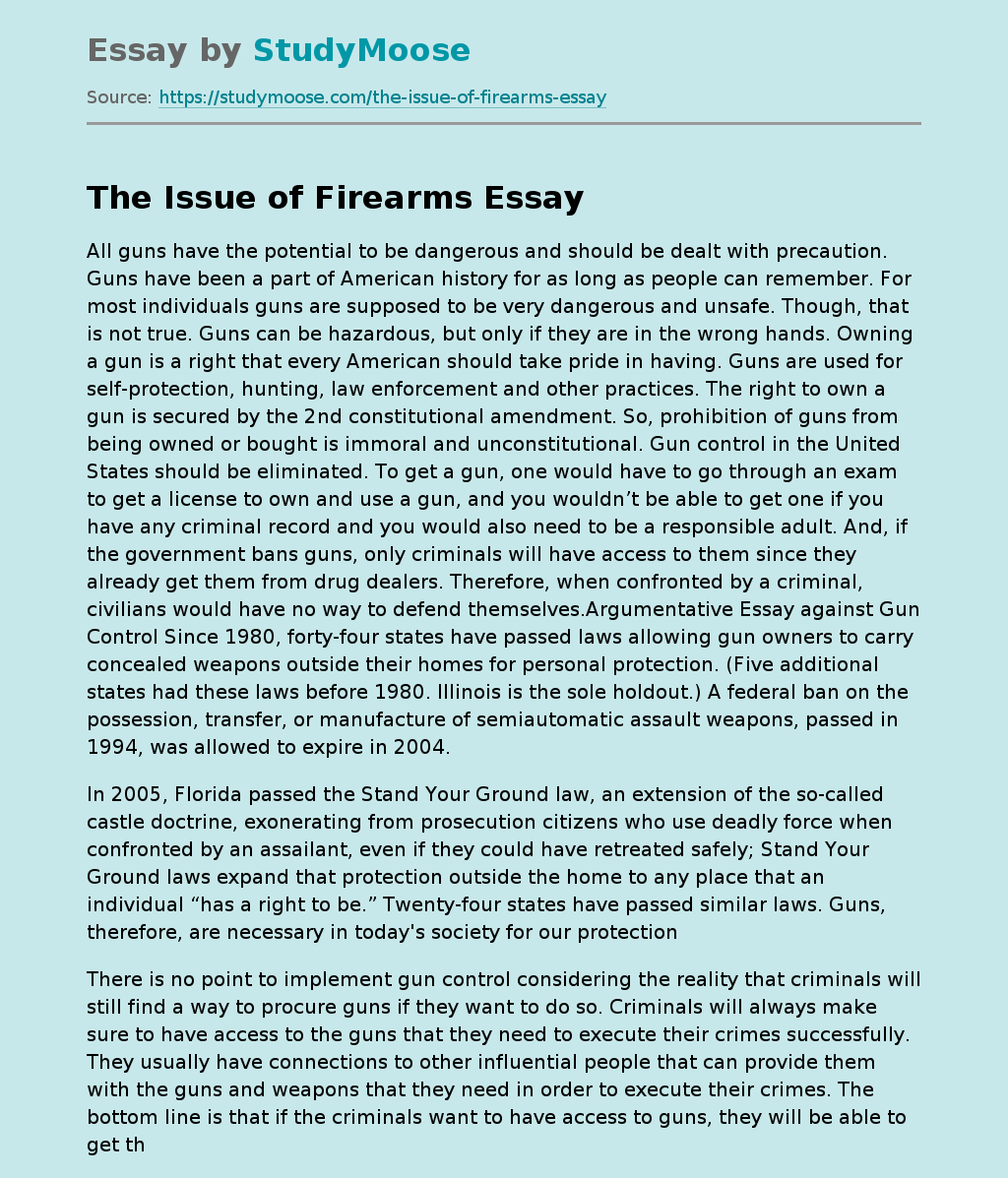