Have you ever wondered who was the smallest president? Well James Madison was the tiniest. He was only five feet and four inches tall only weighed about one hundred pounds. Madison was a sickly man and very reserved. He was very intelligent and very committed to creating a nation out of the thirteen states.

James Madison was the fourth President of the United States. He was born March 16,1751 in Virginia. He had ill health through his life. Madison went to a plantation school when he turned eleven.

Don't use plagiarized sources. Get your custom essay on
“ The Intelligent James Madison ”
Get custom paper
NEW! smart matching with writer

He studied and lived there for five years. Thomas Martin and his brother accompanied Madison to Princeton. After an examination he was able to enter college as a sophomore. Madison made some friends at college including William Bradford who became the United States attorney general. Then Madison combined his junior and senior year, since he was a year older than his classmates. He studied day and night with very little sleep. He was too exhausted to attend his commencement exercises in October 1771, sixteen year old Aaron Burr graduated in the same class.

After graduation, he stayed on at Princeton for another half of a year furthering his studies. His father asked James to return home to tutor his siblings. Madison went to northern Virginia to improve his health. The physician advised him to spend less time in the books aka studying. In 1774 being appointed to the Orange County Committee of Safety improved his mental state. The citizens of Orange County chose him as a delegate to the convention in Williamsburg unique fight for the people indepence.

At age of 25 at the Williamsburg Convention he began a political career.

In Virginia the talk about indepence was big at the time. Madison was the youngest representative there so he did not talk much. James Madison supported Thomas Jefferson’s idea to acknowledge religious rights and to stop making the people follow one religion and not the government choice, but at the time that idea was held back by the conventions until years later. The establishment of the House of Delegates was at Williamsburg and supporting the new constitution for Virginia. As a colleague in the first convention, James Madison was develop into the new assembly and served for a term. After that term he had to issue for a reelection. Other politicians that was older and smarter about how people would vote for them was to give them a keg of rum when the people came to vote. However Madison had never thought of that so he did not make it in that election. From then on James Madison never lost another election.

As an appointed member of the Virginia Council of State he advised the governor, Patrick Henry and the next governor, Thomas Jefferson. Jefferson and Madison became long time friends, although opposites in appearance and personality.

When Madison was in the continental congress he noticed many things. Madison noticed that the delegates voted for their own states interest and not the country’s best interest. He was kept busy with formal reports, shaping diplomatic instructions, along with translating French communication to English. While serving he met a young lady that was a relative of William Floyd, delegate from New York. Madison began courting Kitty and was soon engaged. Only to his dismay when she returned to New York she broke the engagement and accepted another proposal, of a young clergyman. Madison’s term ended in October 1783. He returned to Virginia. He was welcomed by his family. At home he immersed himself in study and books that Jefferson sent from Paris. Madison did not understand why government set up to involve people to fail.

Madison wondered about the nation’s failing government. He knew the Articles of Confederation served well during the American Revolution, were not working as a constitution for a new nation. Each state had its own government and individual states set up their own tariffs and taxes. Congress had no power to enforce laws, raise money, and pay debts. There was no court, senate, and no presidents. Madison wondered if the state could really work together.

In the spring of 1784 Madison was urged to stand for election to the Virginia House of Delegates. He ran and won the election. His first action was to invite other states to a meeting, in Virginia, to discuss how to change the articles of Confederation. Virginia opinion carried the most weight and would be hear. 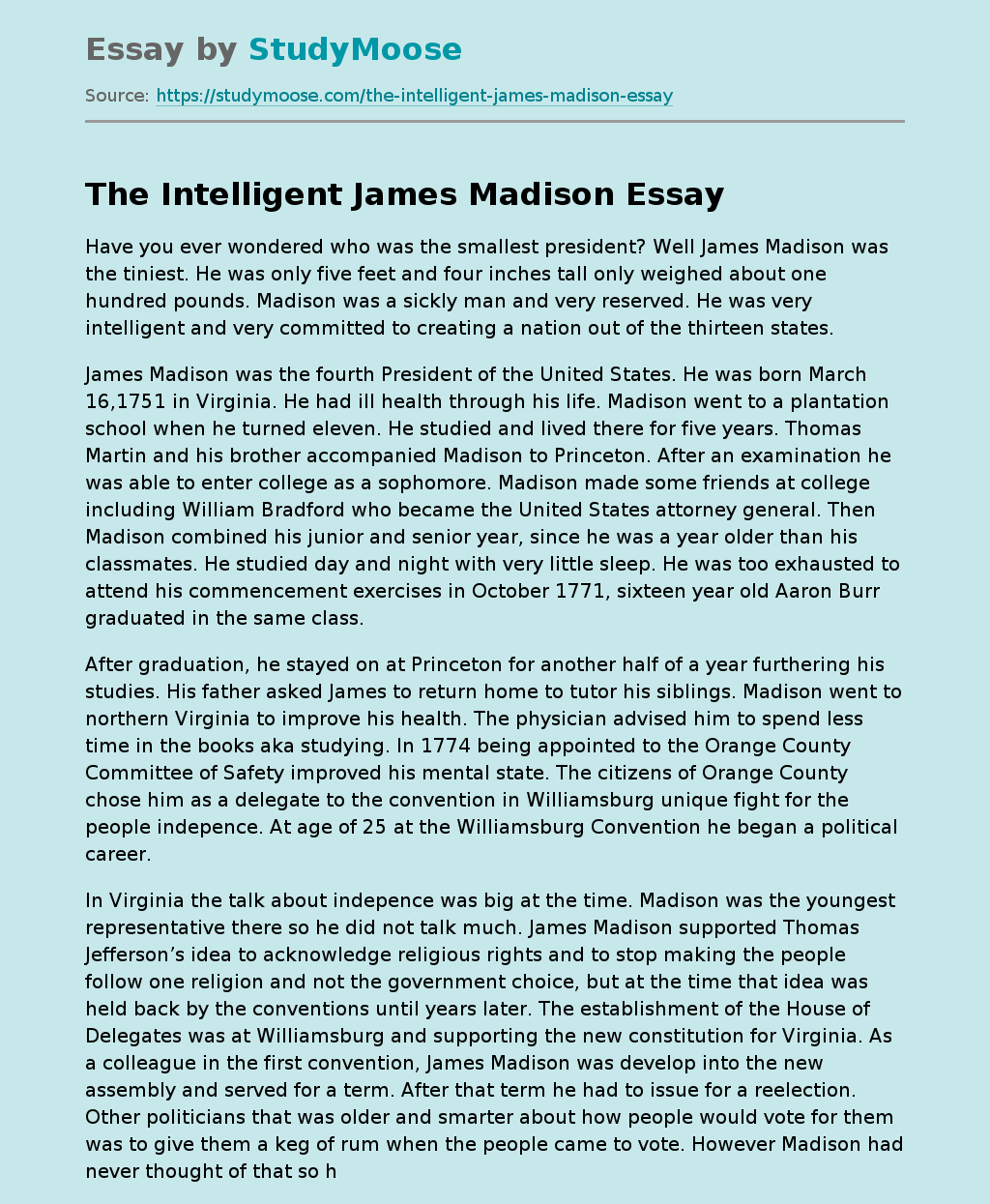