The intangible assets section of the balance sheet

E12-1 (Classification Issues—Intangibles) Presented below is a list of items that could be included in the intangible assets section of the balance sheet.

(a)Indicate which items on the list above would generally be reported as intangible assets in the balance sheet.
13.Goodwill acquired in the purchase of a business.
15.Cost of purchasing a patent from an inventor
16.Legal costs incurred in securing a patent.
17.Unrecovered costs of a successful legal suit to protect the patent. 23.Cost of purchasing a trademark
19.Cost of purchasing a copyright.
10.Purchase cost of a franchise.
(b)Indicate how, if at all, the items not reportable as intangible assets would be reported in the financial statements. 1.Investment in a subsidiary company. – long term investments 2.Timberland. – PPE

3.Cost of engineering activity required to advance the design of a product to the manufacturing stage. – research and development

6.Cost of searching for applications of new research findings.

7.Costs incurred in the formation of a corporation. – expense

22.Cost of developing a trademark.

E12-4 (Intangible Amortization) Presented below is selected information for Palmiero Company. 1.Palmiero purchased a patent from Vania Co. for $1,500,000 on January 1, 2010. The patent is being amortized over its remaining legal life of 10 years, expiring on January 1, 2020. During 2012, Palmiero determined that the economic benefits of the patent would not last longer than 6 years from the date of acquisition. What amount should be reported in the balance sheet for the patent, net of accumulated amortization, at December 31, 2012? 2010

3.On January 1, 2010, Palmiero incurred organization costs of $275,000. What amount of organization expense should be reported in 2012? a.Expense startup costs as incurred

4.Palmiero purchased the license for distribution of a popular consumer product on January 1, 2012, for $150,000. It is expected that this product will generate cash flows for an indefinite period of time. The license has an initial term of 5 years but by paying a nominal fee, Palmiero can renew the license indefinitely for successive 5-year terms. What amount should be amortized for the year ended December 31, 2012? a.zero

Answer the questions asked about each of the factual situations. E12-5 (Correct Intangible Asset Account) As the recently appointed auditor for Hillary Corporation, you have been asked to examine selected accounts before the 6-month financial statements of June 30, 2012, are prepared. The controller for Hillary Corporation mentions that only one account is kept for intangible assets.

E12-16 (Accounting for R&D Costs) Margaret Avery Company from time to time embarks on a research program when a special project seems to offer possibilities. In 2011, the company expends $325,000 on a research project, but by the end of 2011 it is impossible to determine whether any benefit will be derived from it. Instructions

(a)What account should be charged for the $325,000, and how should it be shown in the financial statements? a.Carry as inventory and allocate as consumed

(b)The project is completed in 2012, and a successful patent is obtained. The R&D costs to complete the project are $130,000. The administrative and legal expenses incurred in obtaining patent number 472-1001-84 in 2012 total $24,000. The patent has an expected useful life of 5 years. Record these costs in journal entry form. Also, record patent amortization (full year) in 2012

(c)In 2013, the company successfully defends the patent in extended litigation at a cost of $47,200, thereby extending the patent life to December 31, 2020. What is the proper way to account for this cost? Also, record patent amortization (full year) in 2013.

E13-2 (Accounts and Notes Payable) The following are selected 2012 transactions of Darby Corporation. Sept. 1
Purchased inventory from Orion Company on account for $50,000. Darby records
purchases gross and uses a periodic inventory system. Oct. 1
Issued a $50,000, 12-month, 8% note to Orion in payment of account. Oct. 1
Borrowed $75,000 from the Shore Bank by signing a 12-month, zero-interest-bearing $81,000 note.

Prepare the necessary journal entries if the wages and salaries paid and the employer payroll taxes are recorded separately.

E13-13 (Contingencies) Presented below are three independent situations.
Answer the question at the end of each situation. 1.During 2012, Maverick Inc. became involved in a tax dispute with the IRS. Maverick’s attorneys have indicated that they believe it is probable that Maverick will lose this dispute. They also believe that Maverick will have to pay the IRS between $800,000 and $1,400,000. After the 2012 financial statements were issued, the case was settled with the IRS for $1,200,000. What amount, if any, should be reported as a liability for this contingency as of December 31, 2012? 2.On October 1, 2012, Holmgren Chemical was identified as a potentially responsible party by the Environmental Protection Agency. Holmgren’s management along with its counsel have concluded that it is probable that Holmgren will be responsible for damages, and a reasonable estimate of these damages is $6,000,000.

Holmgren’s insurance policy of $9,000,000 has a deductible clause of $500,000. How should Holmgren Chemical report this information in its financial statements at December 31, 2012? 3.Shinobi Inc. had a manufacturing plant in Darfur, which was destroyed in the civil war. It is not certain who will compensate Shinobi for this destruction, but Shinobi has been assured by governmental officials that it will receive a definite amount for this plant. The amount of the compensation will be less than the fair value of the plant but more than its book value. How should the contingency be reported in the financial statements of Shinobi Inc.?

The intangible assets section of the balance sheet. (2016, Apr 22). Retrieved from http://studymoose.com/the-intangible-assets-section-of-the-balance-sheet-essay 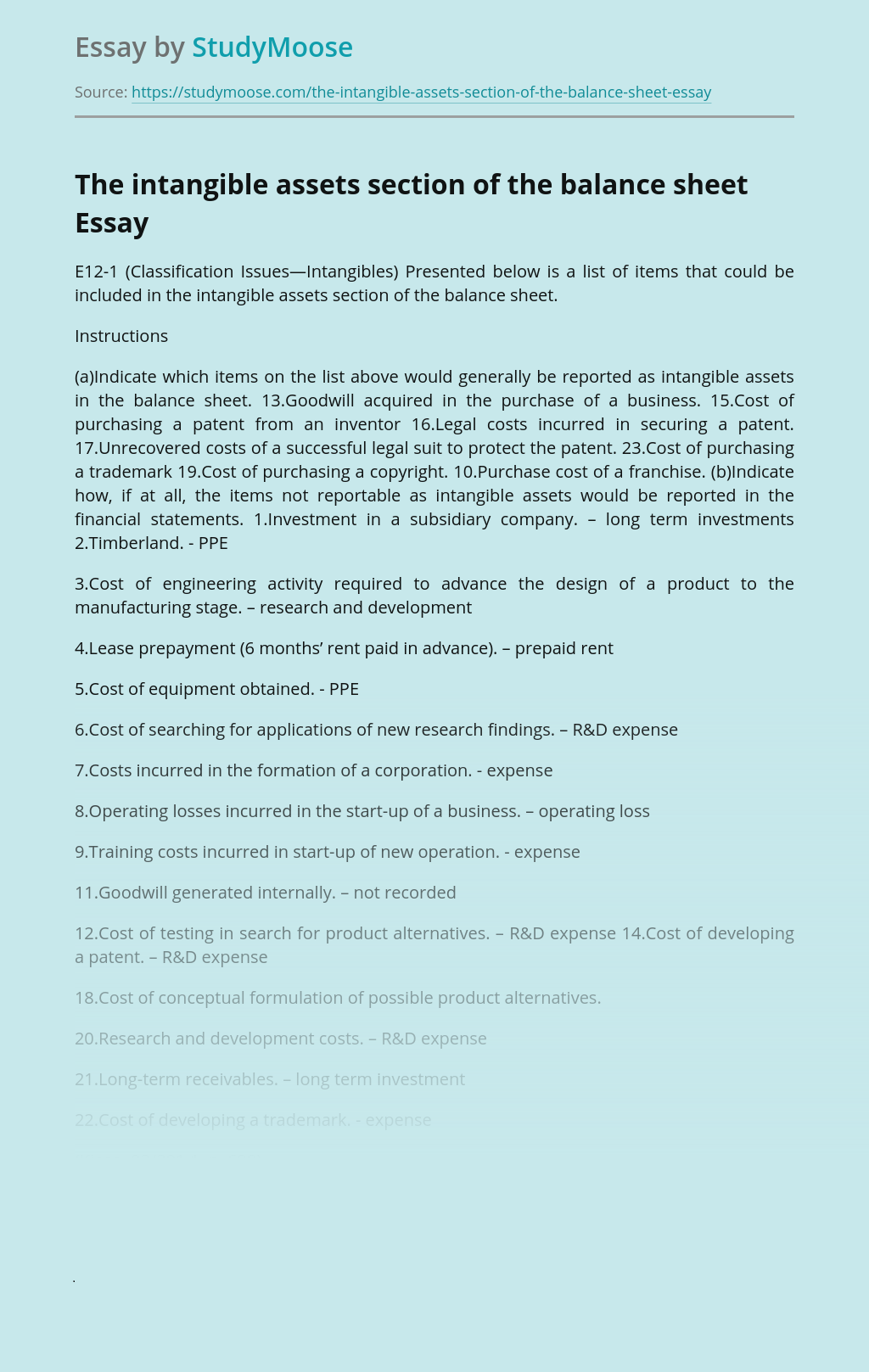 Don’t waste time
Get a verified writer to help you with The intangible assets section of the balance sheet
Hire verified writer
$35.80 for a 2-page paper
Stay Safe, Stay Original