The Insurrection of Hierarchy in "A Tale of Two Cities

The only factor in history that has changed the world is a group of determined and brave citizens. Many historical events, like the American Revolution and Russian Revolution, have had occurrences where people of estates, colonies, or lower social castes are in control of some type of insurrection. These revolts and uprisings are caused by the lack of fair treatment given to the common people, to the point of inevitable rebellion. Similar to these two revolutions, the third estate in the French Revolution uprises due to the lack of proper treatment provided to them.

Don't use plagiarized sources. Get your custom essay on
“ The Insurrection of Hierarchy in “A Tale of Two Cities ”
Get custom paper
NEW! smart matching with writer

Charles Dickens focuses on this idea of poorly treated people being suppressed to ultimately battling back for equal rights in his novel A Tale of Two Cities. Dickens’ use of diction and characterization in A Tale of Two Cities depicts that when societies are held under excessive restraint, defiant actions inevitably arise.

Diction is utilized to show how the people of the third estate transfer from a submissive mindset to a defiant one.

The Marquis of the town orders his carriage driver to quickly speed through the town. As people are dashing away and dodging the carriage, one unfortunate child is run over. The father of the child is outraged, but “… after the first cry, they had been silent, and they remained so. The voice of the submissive man who had spoken, was flat and tame in its extreme submission” (Dickens 111). The diction that is employed shows that the townspeople fear to stand up against a member of high authority and royalty.

“Submissive” and “silent” portray the ways that the townspeople react to the authority that overpower them.

Factors like these build up anger and aggression inside the minds of the members of the third estate, which acts like cause and effect and will result in a negative outcome for the royal class. The way the Marquis classifies the third estate further represents the egotistical actions of the hierarchy, revealing “how Monsieur the Marquis regards those beneath his higher social status. They are, in his mind, inhuman cattle, not worth any consideration…” (Howes). The public remain passive with fury and hatred building up inside of them, which will ultimately result in an unfavourable outcome for the higher class. These thoughts of treating the lower class as “inhuman cattle” and feeling that they are not “worth consideration” shows the disregard that the royalty has for the peasants.

Diction is used subsequently again to show the defiance that is unleashed from the lower class due to the constant restraint they are put under. The cruel mentality takes over after the lower class plans to burn down the chateau of the Marquis due to all the harsh actions he has committed. This has been planned for some time, due to the fact that the mender of the roads and one of the Jacques discuss about it. Anon, at sunset, flames and smoke can be observed rising from over the hill, “as if it were the face of the cruel Marquis, burning at the stake and contending with the fire” (Dickens 234).

The burning of the chateau is a turning point for the peasants; it makes the royalty realize the power that the lower class possesses. “Burning” and “contending” are interpreted to show the accumulation of the anger and defiance the third estate is depicting, and this inhumanity of unleashing anger and taking revenge is inheriting the minds of the citizens. These events “represent [the] breakdown of one social order and the emergence of another, one that has been building in strength over time […] the change is sudden and violent, like a storm” (Bloom 50). Due to the inhuman treatment the peasants have to undergo, like high taxes and poor living conditions, the peasants revolt and make one of their first big acts of revenge. The change is “sudden and violent”, illustrating that the peasants are quickly fighting back with full force due to all the miserable factors that have occurred to them. By burning down the chateau, the clergy and nobility realize that the peasant revolt is becoming serious and, in the near future, will result in the downfall of the higher class.

In addition to diction, characterization is used to show how Madame Defarge develops from a passive mindset to a vengeful one. Madame Defarge knitted a “hit list” which consisted of the names of all the people who were enemies of the revolution. Madame Defarge did this on the down low, and acted suppressed about the situation by not letting anyone know the true reason of her knitting. John Barsad questions the purpose of the knitting, and Madame Defarge states that “‘I may find a use for it one day. If I do – well,’ said Madame, drawing a breath and nodding her head with a stern kind of coquetry, ‘I’ll use it!’” (Dickens 182).

Madame Defarge is depicted as sly when implying that she doesn’t know what she’ll use her knitting for. Foreshadowing of her defiance is also shown when stated that she’ll find use for her knitting in the near future. Madame Defarge would always knit in the corner of a room whenever she added people to the list, and this builds up to the turning point from submissive to defiant. Madame Defarge’s pastime of knitting is described as “something, once innocent, delivered over to all devilry – a healthy pastime changed into a means of angering the blood’” (Bloom 51). What was once an activity to list the traitors of the revolution is now a hit list to obtain vengeance for what the upper class did to Madame Defarge’s family. Madame Defarge is soon to be characterized as an unstoppable force who has no mercy for those who did wrong to her loved ones, and it all starts with the passiveness of the knitting. The knitting was once an “innocent pastime” which Madame Defarge did, but later becomes something which is feared by the higher class.

The turning point of Madame’s mindset is when she states that they stop at extermination. Madame Defarge is shown as ruthless when she states that they stop fighting once everyone on the list is exterminated. This depicts how Madame Defarge immensely detests the higher class by the way the peasants are treated and how her family was treated because she “lacks her husband’s sense of compassion. She vehemently hates the aristocracy […] for its treachery toward her own family” (Gale). Due to the torture her family had to undergo, Madame Defarge has a strong dislike towards the hierarchy. This fuels her motive for revenge and is the reason why she turns from passive to defiant.

In Charles Dickens’ A Tale of Two Cities, Dickens utilises diction and characterization to portray that when factions are held under needless restriction, aggressive actions ultimately arise. The third estate was held under excessive restraint and was ignored by the hierarchy. This ultimately resulted in the French Revolution, which was remembered all throughout history. In today’s society, people have to be treated equally in order for peace and tranquility. Without equality, problems like riots and revolts occur and ultimately result in a negative downfall. Conflicts relating to discrimination against color, ethnicity, race, religion, etc.. are causing negative effects in the world, so treating everyone in a balanced way would result in a positive environment.

The Insurrection of Hierarchy in "A Tale of Two Cities. (2021, Dec 02). Retrieved from https://studymoose.com/the-insurrection-of-hierarchy-in-a-tale-of-two-cities-essay 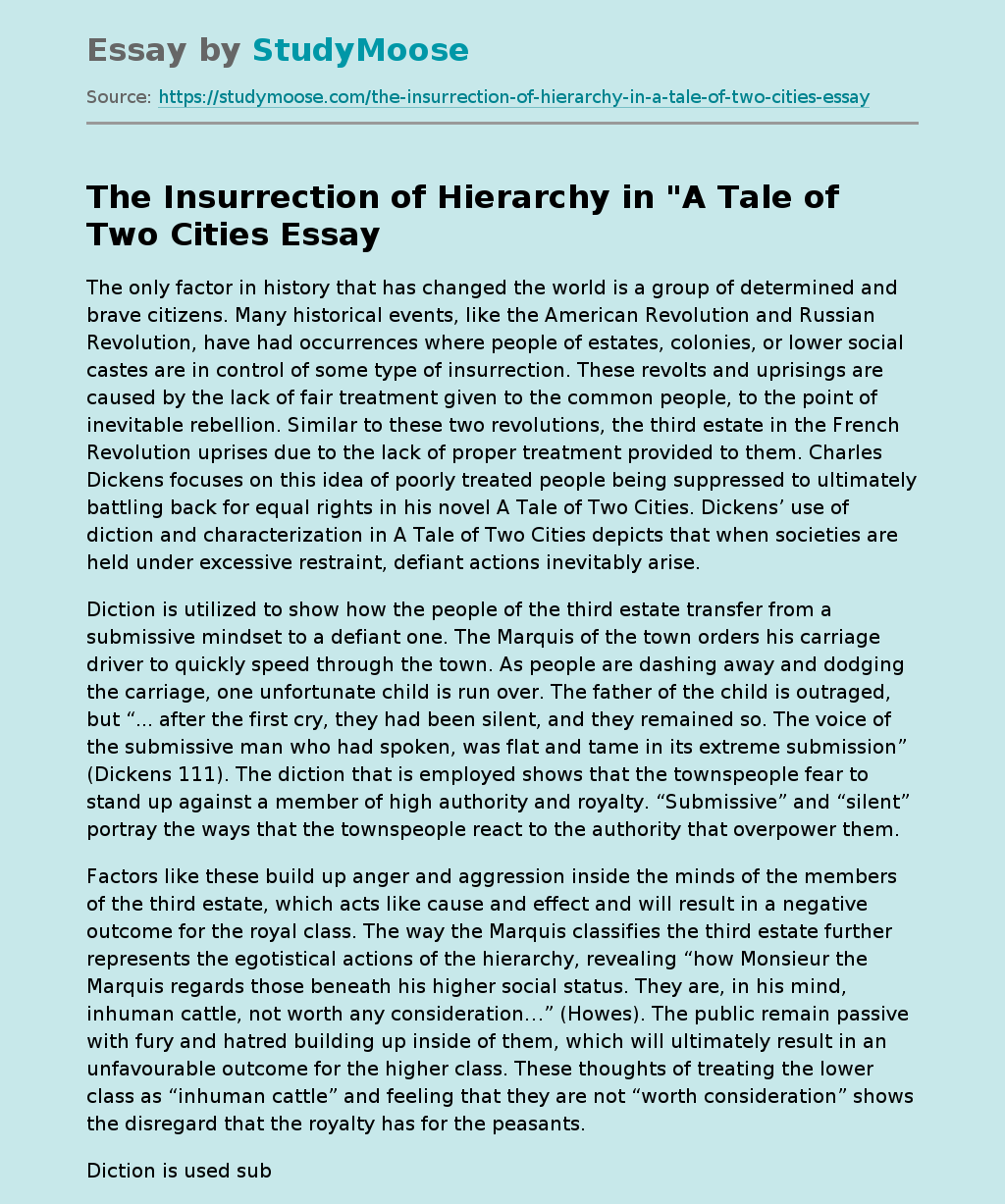