The influence of violent media on aggression

This literature report will help assist in the understanding of how violence within the media contributes to an increase in aggression. In the present, there has been a vast increase in mass media saturation in contrast from the past. This present era of twentieth century society enables television, radio, videos, movies, computer networks and video games to assume central roles in the daily lives of the public (Anderson, CA 2004).

Don't use plagiarized sources. Get your custom essay on
“ The influence of violent media on aggression ”
Get custom paper
NEW! smart matching with writer

These arguments will be analysed to further demonstrate the distinct concepts of how media violence may increase aggression.

Influences of different media on aggression

In the current society televisions, movies and video games are common sources for media violence. However, there has also been a development in technology that inhibits mobiles, portable systems and internet to also display media violence at some level.

Nonetheless, for the purpose of this literature report, televisions, movies and video games will only be explored. Media Violence has two central effects that show the impact of such media violence on aggression.

Television violence and movie violence have similar but not so heavy impacts on aggression as supposed to video game violence. This is because the “violence rate in video games is much higher than in other entertainment media” (Anderson, CA 2004). This statement means that the number of violent acts of a violent video game within a half hour period is greater than most violent television shows and movies (Anderson, CA 2004). Additionally video games make the viewer in control of the characters actions.

It is giving the child or the person playing the game authority of what is happening within the game. Furthermore in most video games these days it rewards the gamer with accomplishments whilst large bold words on the screen tell them how well they performed. Words such as ‘Awesome’ and ‘Killing Spree’ are commonly used and encourage the gamer to feel a sense of achievement right after they have just committed a violent act. Violence within television shows and movies is also an ongoing contributor to an increase in aggression.

Violence within these two media outlets show various impacts on aggression (Myers, D.G 2013). These impacts include: Desensitisation, social scripting, altered perceptions and cognitive priming. “As humans, we are simply not capable of prolonged arousal to any specific event” (Media Violence Commission, 2012), this is related to desensitisation and is one example of the effect of long – term exposure to media violence.

Effects of Violent Media on Aggression: Levels of Analysis

Environmental/Social
Cells and nodes in the brain.
Emotionally desensitized to the violence.
Imitating media characters.
Cells and nodes in the brain help differentiate something we have seen before, from something we haven’t. These can either be an object, colour or feeling These particular cells and nodes are triggered if we experience that same thing at a later time. First and foremost, with reference to the above statements, when more than one thing is experienced at a given time; they begin to be connected to one another.

For example “a rose and its distinctive smell” (Media Violence Commission, 2012, p.337). Therefore, when a person is exposed to media violence, the cells and nodes in the brain escalate and link together, which then become partially activated. “When nodes associated with a behavioral tendency are primed, it makes it more likely (but not certain) that the behavior will occur” (Media Violence Commission, 2012). Hence, cells and nodes in the brain have a direct correlation to an increase in aggression.

Another justification of why media violence increases aggression refers to the psychological aspect of a person. The person viewing the particular media violence may be emotionally desensitized to it. It has been made evident through media analysts that desensitisation has a direct relationship with exposure to media violence. “Desensitization can be broadly defined as the reduction or elimination of cognitive, emotional, physiological, and ultimately behavioral responses to a stimulus” (Media Violence Commission, 2012).

The desensitisation of violence disturbs the procedure of moral assessment as a result of the individual not perceiving or reacting to the notions that generally would trigger the assessment process. Research has recently identified an association with media violence and desensitisation, as “measured in psychophysiological and behavioral research, over both the short and the long term” (Media Violence Commission, 2012, p. 339).

Most media characters are seen as role models, especially by the youth, and specifically if the violent behaviour is granted as “justified and socially acceptable” (Media Violence Commission, 2012). The majority of the time violent media content is shown as enjoyable, which allows aggression approaches to condition classically which involves positive feelings. These approaches will presumably result in “adjustments to attitudes about aggression” (Media Violence Commission, 2012, p.338), such as viewing aggression as a further adequate response to harassment.

Furthermore, when someone takes like to a character, they tend to mimic their actions. Hence when the certain character acts in a violent manner, the viewer/s may mimic these actions when in a similar situation. Mimicry may be associated with the psychological aspect, but it affects the social and environmental
prospect on a greater level.

Conclusion
The assigned readings and literature emphasise typical themes and arguments encapsulating the topic of how media violence influences aggression. The majority of this literature indicated that media violence has an extensive impact on aggression especially when associated with the youth. Within this literature report, there is evidence of these particular themes and arguments. Further, the levels of analysis was introduced simultaneously which allows an in depth inquiry into what media violence actually is and how it contributes to an increase in aggression.

Anderson, C. A. (2004). Violence in the media: Its effects on children. Presentation for the Victorian Parenting Centre & Young Media Australia: Issues in Parenting Education, September 11, 2003.

The influence of violent media on aggression. (2016, May 09). Retrieved from https://studymoose.com/the-influence-of-violent-media-on-aggression-essay 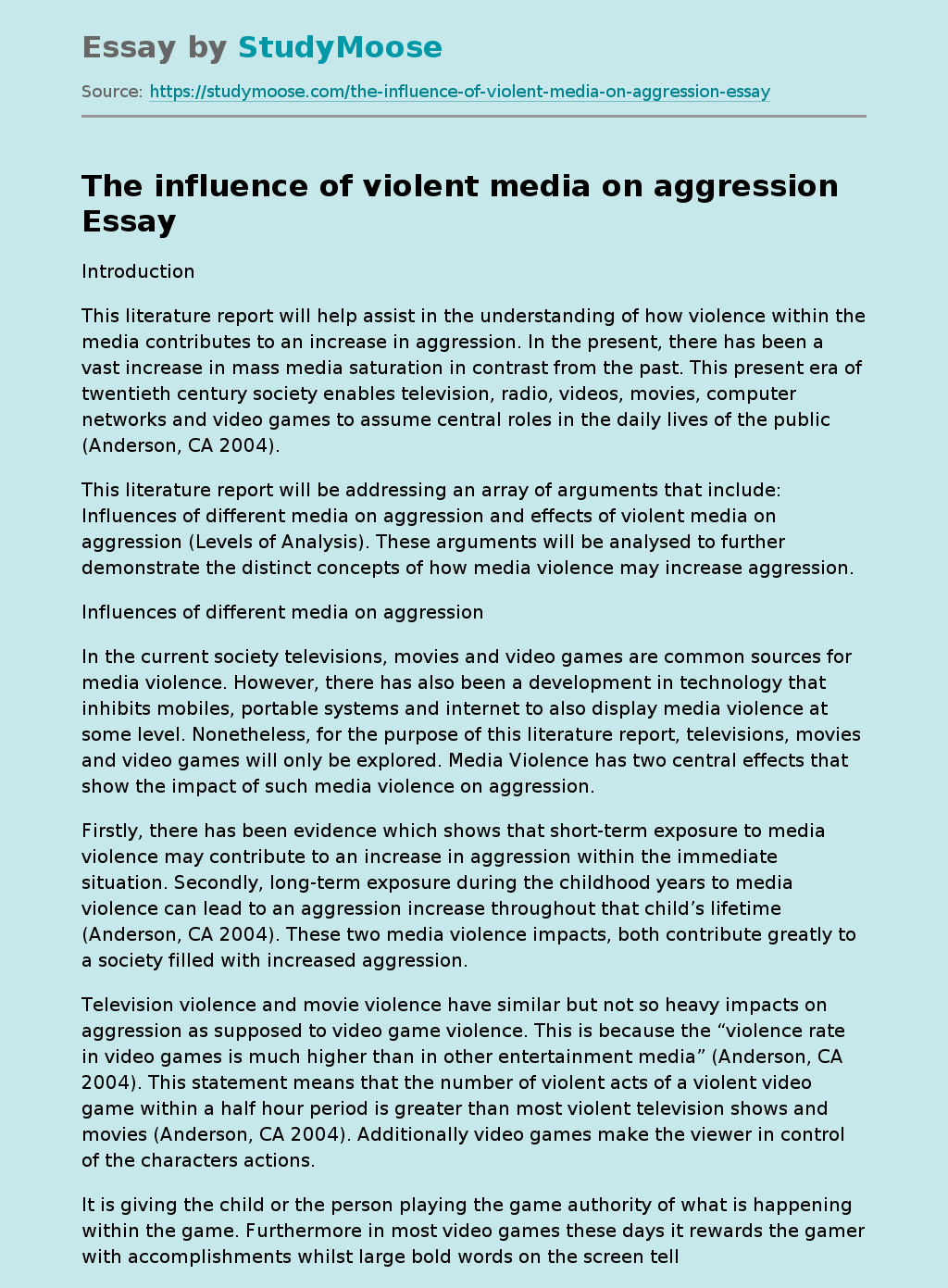