The Indian House Crow (Corvus splendens) is a bird of the Crow family (Corvidae), and has a great ecological flexibility (Nyari and Peterson, 306). A native of southern Asia, the species has a wide distribution in countries such as Nepal, India, Pakistan, Sri Lanka, amongst others (Ottens, 69). According to Brook et al (813), the species is associated with human settlements wherever in all of its range. Because of its ability to adapt in a wide range of human settlements, the species has invaded several locations worldwide, such as East Africa in 1897 (Cooper, 381) and more recently parts of Europe (Ottens, 70).

Don't use plagiarized sources. Get your custom essay on
“ The Indian House Crow: Background ”
Get custom paper
NEW! smart matching with writer

Predictive models (Nyari, and Peterson, 306) has shown that the potential range of the species include Central America, the Caribbean, equatorial West Africa, as well as mainland and insular Southeast Asia, which are yet to be colonized. The species close association with human beings coupled with its ability to be diet flexible has led to an explosion in its population. The species has a varied diet, which consists of refuse around human habitation, insects and other small invertebrates and small reptiles.

It also feeds on eggs, other birds’ nestlings, grains and fruits. Its highly opportunistic behavior and a largely omnivorous diet further make it highly adaptive. Problems with the species The House Crow has been a cause of problems to people because of its habit of scattering rubbish and damaging of electrical wiring. It has also been reported to block drainpipes. In areas around airports, it is considered a potential danger as it can cause bird strike hazard to aircraft.

Flocks of this bird are noisy and their droppings are a nuisance to the environment.

Ryall and Reid (32) state that the species is an agricultural pest and a disease vector, and it is believed to have decimated a number of native bird species. In its range, the House Crow is a major agricultural pest, and is notorious for raiding a variety of crops including wheat, maize and sunflower. Before it was extirpated in Australia (Cooper, 381), it caused extensive damage to both vegetables and fruit crops such as mangos, guavas, pawpaw, fig, apple, pear, grape and stone fruit. Additionally, the house crow has been reported to attack livestock and kills poultry, new-born calves as well as kid goats.

Injuries to adult livestock and harassment have also been reported. It is also a threat to an area’s avian (bird) diversity, as it is known to kill and drive off other birds until it is the only bird species in that area. As such, it poses a serious threat to any country’s biodiversity, especially avian diversity. Because of the species varied diet which includes carcasses, the species can act as carriers of disease agents. Specifically, the Newcastle disease has been found in Indian House Crow in India (Roy et al, 178). Control mechanisms The close association of Indian house crows with humans makes it a challenge to control its populations.

However, a number of control mechanisms have been identified which can go a long way in controlling the species. These include: Poisoning- According to an article in the National Geographic website, Marshall states that one way through which the species can be eliminated is through poisoning of their food. However, care should be taken to ensure that this does not poison other birds. This is however unlikely because house crows usually drive away all other species of birds. Timing is of the essence, and it is recommended that this should be done during the breeding season when they congregate at specific sites.

Intense searching of areas where the birds congregate should be done before poisoning. Monitoring of ships- Indian house crows have been known to use ships as their main mode of colonizing areas in which they are not natives. As such, a good way to control them would be to ensure that they do not colonize an area in the first place. It is thus a good idea to monitor ships for occupancy by the crows, as well as be on the lookout for the birds along sea frontiers and appropriate actions taken before they spread further inland.

Breeding control and habitat modification- Lamba (121) indicates that breeding of house crows is at least known to occur at sites meeting a set of specific conditions, such as large-crowned trees, telephone towers and buildings. Such breeding sites could be used to control their increase by removal of nests coupled with destruction and modification of sites they are likely to use for breeding. This should be intensive especially during the breeding season. Other control mechanisms that can be used to manage the species include shooting and scaring with firearms and trapping.

Incentives may include rewards for submissions of crow eggs and nestlings. Summary and conclusion With the global spread of the avian influenza and the threat of Indian House Crows to spread the Newcastle disease, effective control mechanisms are needed, such as those discussed above. However, before such control mechanisms are taken, it is important that studies be undertaken prior to their implementation to determine the level of colonization of the birds. Sufficient resources should be allocated for such programmes, as attempts to control these birds have previously been hindered by lack of sufficient funding (e.

g. in South Africa). Poisoning is especially effective if the right chemicals are used, but the implications to the environment may be significant if care is not taken. Monitoring of ships, on the other hand, needs a keen eye and expertise in bird behavior for it to be effective. A key concern here is what should be done should a ship be found to have the birds, as they are very cunning and can easily escape. Finally, breeding control has its own implications, as the birds occupy some of the most critical sites such as telephone and electric pylons. 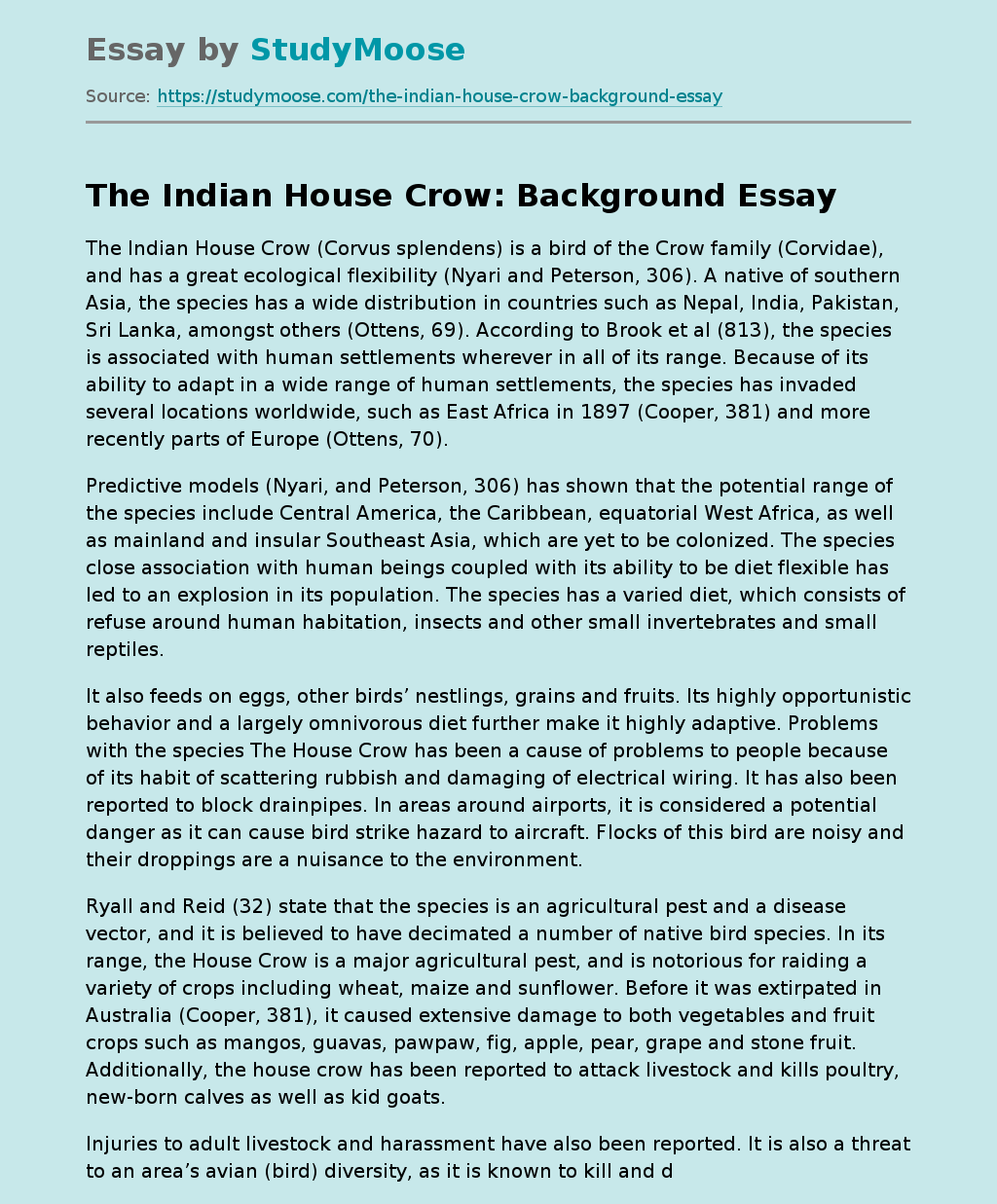