The Incompatibility of Happiness and Truth

Brave New World is full of characters who do everything they can to avoid facing the truth about their own situations. The almost universal use of the drug soma is probably the most pervasive example of such willful self-delusion. Soma clouds the realities of the present and replaces them with happy hallucinations, and is thus a tool for promoting social stability. But even Shakespeare can be used to avoid facing the truth, as John demonstrates by his insistence on viewing Lenina through the lens of Shakespeare’s world, first as a Juliet and later as an “impudent strumpet.

” According to Mustapha Mond, the World State prioritizes happiness at the expense of truth by design: he believes that people are better off with happiness than with truth. Soma: The drug soma is a symbol of the use of instant gratification to control the World State’s populace. It is also a symbol of the powerful influence of science and technology on society.

What are these two abstract entities that Mond juxtaposes? It seems clear enough from Mond’s argument that happiness refers to the immediate gratification of every citizen’s desire for food, sex, drugs, nice clothes, and other consumer items.

It is less clear what Mond means by truth, or specifically what truths he sees the World State society as covering up. From Mond’s discussion with John, it is possible to identify two main types of truth that the World State seeks to eliminate. First, as Mond’s own past indicates the World State controls and muffles all efforts by citizens to gain any sort of scientific or empirical truth.

Second, the government attempts to destroy all kinds of “human” truths, such as love, friendship, and personal connection.

These two types of truth are quite different from each other: objective truth involves coming to a definitive conclusion of fact, while a “human” truth can only be explored, not defined. Yet both kinds of truth are united in the passion that an individual might feel for them. As a young man, Mustapha Mond became enraptured with the delight of making discoveries, just as John loves the language and intensity of Shakespeare. The search for truth then, also seems to involve a great deal of individual effort, of striving and fighting against odds.

The very will to search for truth is an individual desire that the communal society of Brave New World, based as it is on anonymity and lack of thought, cannot allow to exist. Truth and individuality thus become entwined in the novel’s thematic structure. Mustapha Mond Towards the end of the novel the reader gets more information about Mustapha Mond. John, Bernard and Helmholtz are taken to his office because of the scandal in the hospital. Mustapha Mond is one of the World Controllers and responsible for Western Europe.

In the conversation with John he tells him that he was interested in science some years ago and because he was too clever for the society of Brave New World he had to choose between living on an island for the rest of his life and conforming to the lifestyle in that society, which was totally rebuilt after the Nine Years’ War and the Great Economic Collapse. He decided to conform and to use the chances the position of one of the World Controllers offers. Nevertheless he kept some of the books that are prohibited.

When John who grew up with Shakespeare’s work asks him for the reason of this prohibition, he says that the government of Brave New World doesn’t want the people to be attracted by old things, especially books, because they should only like new things. In addition to that, the inhabitants wouldn’t understand books like “Othello”, because they live in totally different circumstances. They are happy, they aren’t afraid of anything, they get what they want and they never want what they can’t get.

Brave New World is a stable world and for understanding tragedies like “Othello” you need social instability. John criticises that art has been given up, but Mond explains to him that this is the price you have to pay for happiness. By giving John the example of an experiment where Alphas had to do even manual work all alone, but failed, he also explains the importance of the caste system, which is necessary for stability. Later, the two men talk about God and why he doesn’t exist in Brave New World.

Mond says, that people don’t turn to God any longer, because they no longer have to suffer from illnesses, inconveniences, unhappiness, fears etc. so they can be independent of God and religion. John claims that God is the reason for everything noble and heroic, but Mustapha Mond tells him that there is no need for nobility or heroism, because everyone is conditioned: they can’t help doing what ought to be done and this is so pleasant that they don’t feel the need to complain about anything.

And if something unpleasant happens, there is always soma to make you happy again! Mustapha Mond is not able to convince John of his ideas and principles – in the end of their conversation John says that he claims the right to be unhappy, to become old and ugly, to have cancer and all sorts of illnesses, to have too little to eat, to be tortured…. so John claims the right to live like we live now.

The Incompatibility of Happiness and Truth. (2016, Dec 08). Retrieved from http://studymoose.com/the-incompatibility-of-happiness-and-truth-essay 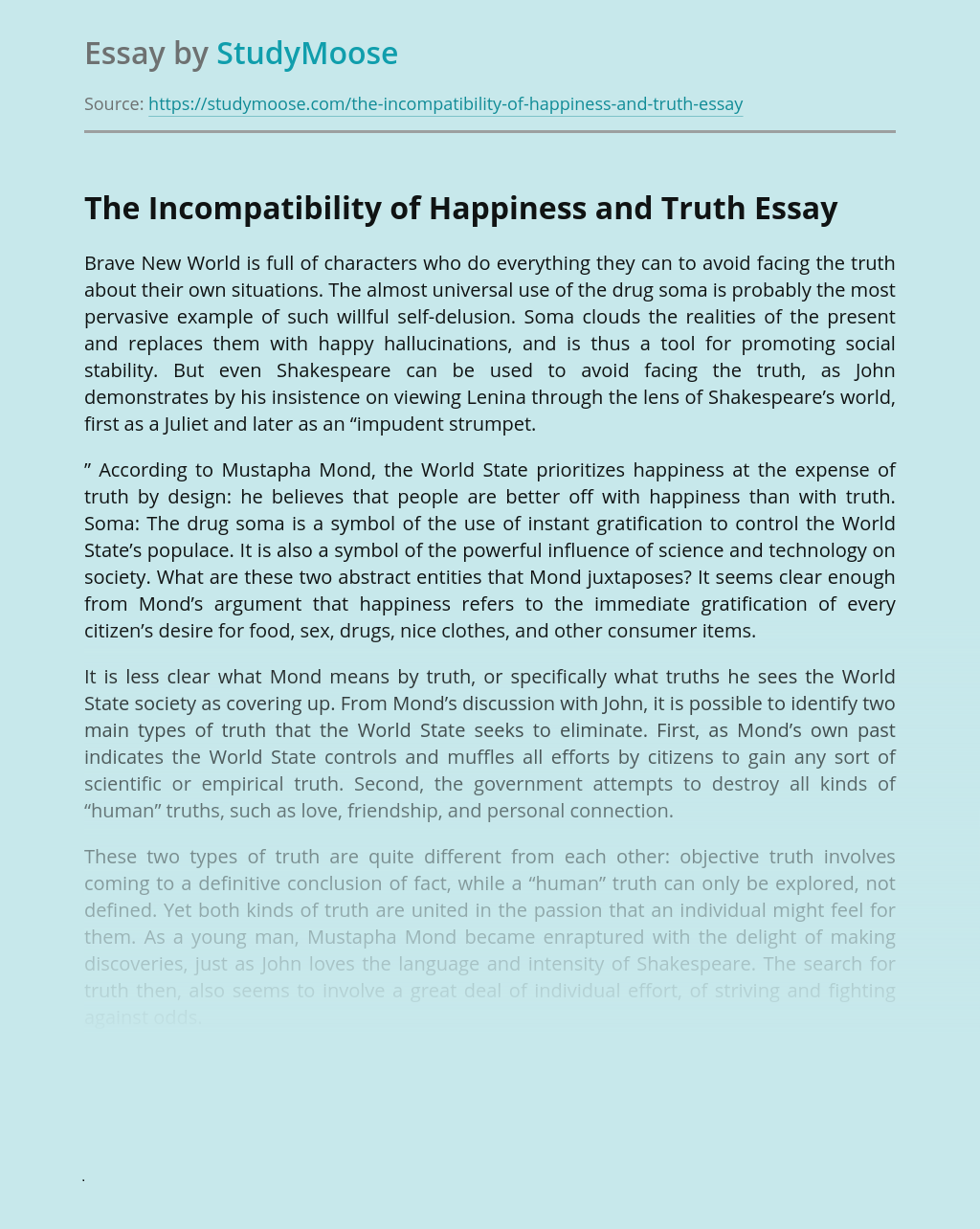 Don’t waste time
Get a verified writer to help you with The Incompatibility of Happiness and Truth
Hire verified writer
$35.80 for a 2-page paper
Stay Safe, Stay Original