The Importance of Self Expression and The Freedom

The novel “Anthem” society and technology as we know it had been driven to entirely new direction. The character in the society does not have the right to speak freely nor do anything that they wish. Ayn Rand writes an opinionated novel title anthem which portrays a character Equality 7-2521 that wants to be well educated due to his curiosity, so Rand develops him as a character that is gifted, unprincipled, and free over the course of the text.

First, Ayn Rand reveals character Equality 7-2521 is gifted because he was different from all of his brothers.

Don't use plagiarized sources. Get your custom essay on
“ The Importance of Self Expression and The Freedom ”
Get custom paper
NEW! smart matching with writer

Rand writes, “ I alone who were born with a curse, for we are not like your brothers.” This example reveals Equality was unlike all of his brothers he’s been thinking forbidden thoughts for most of his life. And doesn’t resist it. This is negative because according to the city council all men’s must strive equally. Rand also writes, “So we fought against this curse.

We tried to forget our lessons, but we always remembered. We tried to not understand what teacher taught, but always understood it.” This example reveals that Equality tried to blend so he could be similar to his brothers, but no matter how hard he tried he was still unique from all of his brothers.

Second, Ayn Rand reveals character Equality 7-2521 is unprincipled because he was committing all sort crime for his own benefit. Rand writes, “ I’ve stolen candles, flints and knives, glass vial and acid from the home of a scholar, and I’ve brought them to this place.

Rand also writes, “ We do not care. We forget all men, all laws and all things save our metals and our wires,” This example reveals character Equality will commit any crimes or do any sort of thing; such as abandoning his all of his brothers for his own sake.

Finally, Ayn Rand reveals character Equality 7-2521 is free because he ran away from the home of scholar which led to more discovery in the Uncharted Forest . Rand writes, “I am done with the monster of “we” the word of serfdom, of plunder, of misery, falsehood and shame.” This example reveals that Equality gradually grows more sure of himself, and more convinced that what he’s doing is right. Rand also writes, “ For the coming of that day I shall fight, I and my sons and my chosen friends. For the freedom of Man. For his rights. For his life. For his honor.” This example reveals once he’s stolen away to the freedom in the Uncharted Forest, he no longer has any reason to be guilty or secretive.

In conclusion, Ayn Rand uses these characteristic gifted, principle and free to describe character Equality 7-2521 throughout the novel. It teaches the importance of self expression and the freedom that comes along with being your own self and having the ability to choose the path you take in life.

The Importance of Self Expression and The Freedom. (2021, Dec 03). Retrieved from https://studymoose.com/the-importance-of-self-expression-and-the-freedom-essay 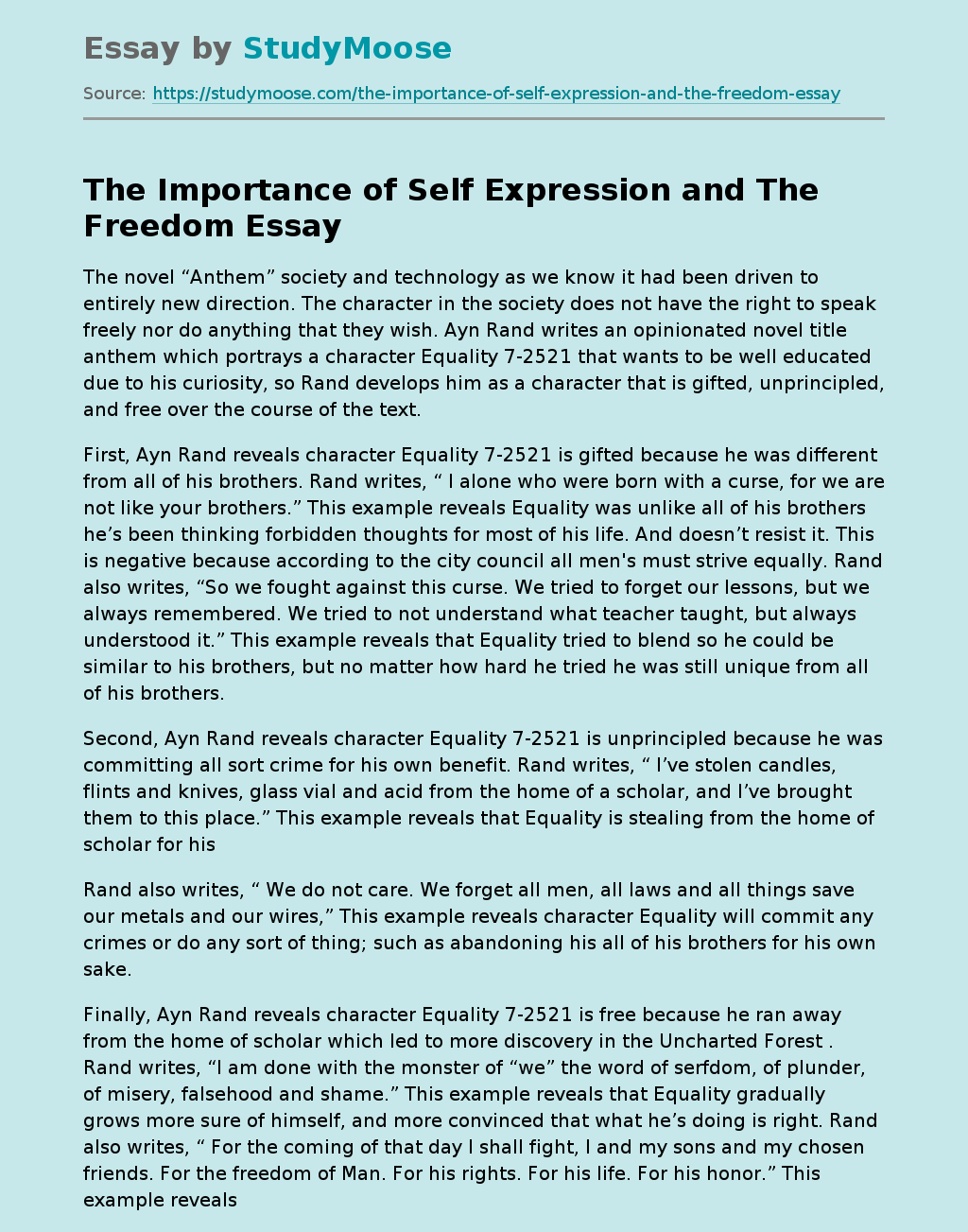