The Importance of Obeying Traffic Laws

Traffic laws are designed to protect you and other drivers on the road. If we do not follow them we are not only putting ourselves at risk but also innocent bystanders and drivers. By knowing the rules of the road, practicing good driving skills and generally taking care as a road user, you help play a vital role in preventing a crash. You will also be making road safety policies more effective. Many factors play a role in road safety including following the speed limits that are posted and making sure safety equipment is properly installed and used.

I will also discuss the skills that are expected and needed to be an efficient driver including the ability to act responsibly, the ability to foresee and react to hazards, good concentration, and following all traffic laws because they are in place for a reason. Drivers are required to drive safe speed for conditions. The reasonable speed for the conditions may be lower than the posted speed limit because of fog, heavy rain, ice, snow, gravel, sharp corners or road construction.

California Vehicle Code section 22350 states “No Person shall drive a vehicle upon a highway at a speed greater than is reasonable… and in no event at a speed which endangers the safety of persons or property”. Road speed limits are used in most countries to regulate the speed of vehicles. Speed limits may define maximum, minimum or no speed limit and are normally indicated using a traffic sign. Speed limits are commonly set by the legislative bodies of nations and enforced by national or regional police.

Maximum speed limits place an upper limit on speed choice and if obeyed can reduce the differences in vehicle speeds by drivers using the same road at the same time. Traffic engineers observe that the likelihood of a crash happening is significantly higher if vehicles are traveling at speeds faster or slower than the mean speed of traffic; when severity is taken into account the risk is lowest for those traveling at or below the median speed and increases a lot for motorists driving faster than the speed limit. Basically the higher the speed of a vehicle, the more difficult collision avoidance becomes and the greater the damage if a collision does occur. Speeding is defined as the act or an instance of driving, especially a motor vehicle, faster than is allowed by law. Speeding is often one component of aggressive driving which is defined as committing a combination of moving traffic offenses so as to endanger other persons or property.

There are strong direct relationships between the speed at which we drive and the risk of crash involvement and the injuries sustained if a crash results. The probability of injury and the severity of those injuries increases exponentially with vehicle speed. Even small increases in speeds result in a large increase in the forces experienced by the vehicle occupants or other road users. Put simply, the faster you drive, the harder you hit and the more severe the injuries you or someone else are likely to suffer. Traveling over the speed limit can be especially dangerous in bad weather conditions. Speeding was a factor in 53 percent of fatal crashes that occurred when there was snow or slush on the road and in 60 percent of those that happened in icy roads. Most of the time, these accidents can be traced to drivers who think they can go faster than the conditions will allow them, or they’re in a hurry to get to their destination. There are steps you can take to make your driving safer. Here are some useful tips from Farmers: Take time to plan ahead. Make sure you allow yourself enough travel time so you don’t end up rushing to get to your destination.

Check your local traffic report on the Web before you leave so you know where to expect congestion – then you know if you’ll need more time to get to your destination. Adjust your driving to meet road conditions. If the road is wet, slow down and keep more distance between you and the vehicle ahead of you. Also, roads are treacherous when it first starts to rain, as the water mixes with oils and other deposits to create a slick road surface. Be prepared to adjust to sudden speed reduction, for example, when you’re exiting from a highway, encountering sharp curves on a two-lane road or entering residential or high bicycle/pedestrian traffic areas. If you’re late, you’re late. Accept it and apologize when you arrive. It’s better than endangering lives. Wear your seat belt. It’s not only the law, it could keep you from becoming a speeding-related fatality. Giving yourself plenty of time to get where you’re going, heeding weather conditions, and using your common sense will help you drive more safely. Vehicle safety equipment is a requirement for many reasons. First, most are in place to keep the passengers of a vehicle safe in-case of a crash.

Taillights are also required on vehicles to let other drivers of vehicles to see your vehicle during low visibility spots. Also along with taillights, you are required to have working brake lights. They are in place to let the vehicles and their operators following you know when you are slowing down. Without them the likelihood of rear end crashes would go up a ton. Turn signals are required for all vehicles to warn others of the drivers movement. They are in place to signal other vehicle operators that your movement is about to change. They also warn oncoming traffic and operators that you are making a move. Also they let vehicles stopped perpendicular to your travel of your movements. Illumination requirements are needed to support you and other operators during your movement and travel on the roadways. One other law that must be followed is not driving while impaired. This includes medication, drugs, and alcohol. When impaired the driver of the vehicle will have his ability to operated said vehicle limited. Alcohol is a leading cause of vehicle accidents in the world today.

If you do not follow the do not operate the vehicle while impaired you will not only be risking your own health and safety but the health and safety of others. Being impaired causes your reaction times to slow which causes accidents. Though not a traffic law we must use certain skills to help make ourselves safe while driving. We must act responsible, by following traffic laws, to keep ourselves and other operators safe on the road. We must foresee and react to hazards, by observing illuminations of other vehicles, to maintain a safe operation. Also we must obey all traffic signs including but not limited to: stop signs, speed limit signs, yield signs, right of way signs, and red lights. They keep us and others safe. Most traffic laws are enacted to address safety related problems.

Traffic laws may be aggravating at times, but they should be observed if we do not want to be stopped and given a ticket or, worse, be involved in an accident. We must follow traffic laws to keep ourselves, as operators, and others safe. Preventing a crash is the most important reason to follow traffic laws. This reason and the ability to keep us safe if involved in a traffic accident makes following traffic laws vital to success while operating motor vehicles. I also discussed the skills that are expected and needed to be an efficient driver including the ability to act responsibly, the ability to foresee and react to hazards, good concentration, and following all traffic laws because they are in place for a reason. Though this does not include all traffic laws this covers some of them that express the importance of them.

The Importance of Obeying Traffic Laws. (2016, Dec 21). Retrieved from http://studymoose.com/the-importance-of-obeying-traffic-laws-essay 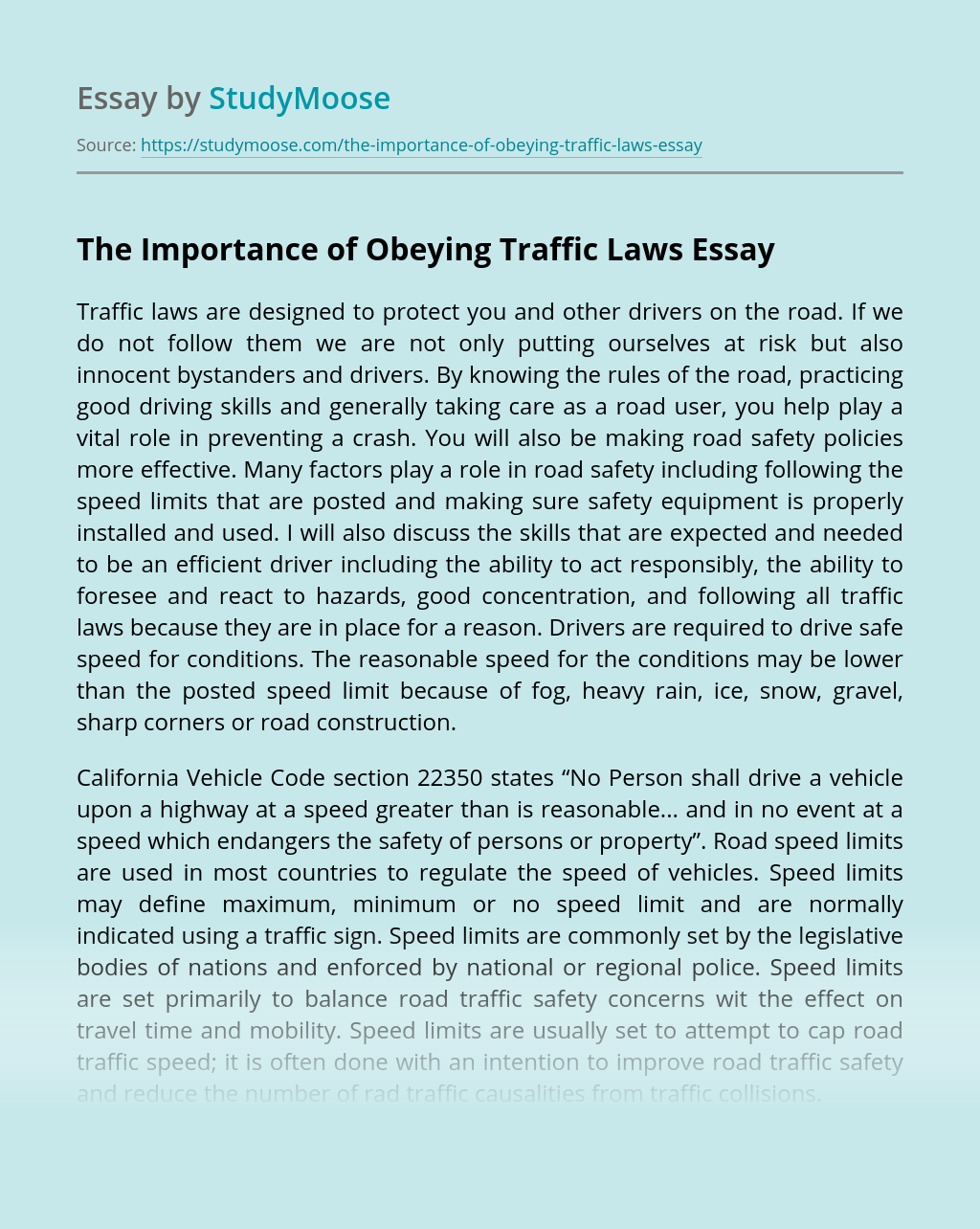 Don’t waste time
Get a verified writer to help you with The Importance of Obeying Traffic Laws
Hire verified writer
$35.80 for a 2-page paper
Stay Safe, Stay Original