The Importance of Land

For Aboriginal Australians, the land has a special significance that is rarely understood by those of European descent. The land, or country, does not only sustain Aborigines in material ways, such as providing food and shelter, it also plays a major role in their spiritual lives. As Rose put it, “Land provides for my physical needs and spiritual needs.” (1992, p.106). To use Rose’s own term, to Aboriginals the land is a ‘nourishing terrain’. (1996, p.7).

The basic tenets of Aboriginal spirituality are inextricably bound to the land.

“For Indigenous Australians the land is the core of all spirituality.” (www.dreamtime.net.au, 2003, p.1). All land is important in some way, but some places are more sacred than others. These ‘sacred sites’ are usually places where important events happened during the Dreamtime, the name given to the Aboriginal creation myth.

Dreamtime (known as tjurpa) cannot be separated from the land. “The earth is the repository of blood from Dreaming deaths and births…Dreaming is quite literally ‘grounded’.

” (Rose, 1992, p.57). As a major part of their spirituality, the importance of land is a result of the importance of Dreamtime. The dreaming explains to Aborigines how life began, and how all life is connected to the land – which is also seen as a living entity as well as being the creator of life.

The land is seen as the repository of spirits, which in Dreamtime became alive in the form of animals, people and plants. These lifeforms in turn created features on the land.

The Gura people of Central Australia believe the Todd River was formed by a giant caterpillar:

Lherre Mpwarntwe. that old Todd River. He is a backbone, lying there. This is his body, right here in Alice Springs. The river is his backbone, and that good soil on both sides, that is his back muscles, that is his flanks. His legs stretch down…. this is the good country. This is all the Yeperenye Caterpillar Dreaming country. (Kimber, 2002. p.6).

At any site where ‘something happened’ in the pre-human era, the site itself commemorates that happening. The characters involved in that particular story remain there in spirit, as an intrinsic part of it. The site is not just earth or rock or water, but more than that. (Saxby, 1979, p.142).

This holistic view of the land is indicative of what it takes to survive in a country that can be harsh and arid. Not only do Aboriginals attribute their culture and spirituality to the land, but also their very existence. The importance of water has long played a part in Aboriginal myths, as has the importance of the place in which one is born.

Any man who has been conceived or born near a rain totem site is considered to be imbued with the eternally present life- force essences of the rain men…(he) learns all of the rain-songs and other sacred associations, and becomes an avid reader of all the signs of humidity and cloud formations. He is considered able to create rain. (Kimber, 2002, p.3).

Being able to create rain and thus control the supply of water was vital to all Aboriginals, none more so than the desert dwellers. From this fundamental need for water sprang many of the Aboriginal myths.

It is not surprising that the permanent waterholes, the source of everything the Aborigines desire, should be associated with ceremonies that perpetuate the race.

The Aborigines are bound to these permanent waterholes by two strong ties: by the material need for food and water, and by the important belief that the pools are the homes of innumerable spirit children, the jilmas, which at some time…will become members of the tribe. (Edwards, 2002, p.60)

Aboriginal spirituality has it that the spirits of unborn children (jilmas) are present in the land, usually in sacred waterholes. By dreaming, the child’s father brings its spirit into the mother’s body. Children are not born from the physical joining of the parents, but from the spiritual joining of both the parents and the land. From this, we can see that Aboriginals attribute their very existence to the land.

Aboriginals believe that they own the land only inasmuch as the land owns them. “The sacred myths were like a title to land, a charter to ownership…even less sacred stories contained this message…as a local, territorial centredness, a territorial focus.” (Saxby, 1979, p.146). Aboriginal myths connected the people to the land, and the land to the people. This was a view that was alien to the European colonisers of Australia, who did not understand the Aboriginals’ connection to the land, and the vital importance it had for all tribes.

Sacred sites are also important in that they define particular Aboriginal countries.

Although they shared physical and cultural features and had ties of affinity, trade and religious co-operation, these societies were distinguished by geography, language and culture. There is no evidence that the indigenes perceived themselves as a homogenous group in the way that Europeans perceived them.” (Linnekin, 1996, p.191)

This European misconception added to confusion about certain sacred sites and their importance to particular tribes. For Aboriginals, their land is important not only on a wider spiritual level, but also on a personal identification level. Far from being an homogenous group, Aboriginals can be distinguished by tribal considerations, with each tribe identifying with a particular area of land. Each area has its own sacred sites, sacred to the people who belong to that area.

While Europeans believed that the colour of a person’s skin indicated their culture and identity, Aboriginals traditionally believed that where a person was born (which part of the land) was the most important factor in determining identity, perhaps even more so than who one’s parents were (although blood ties were and still are very important). An indigenous person’s identity was formed by their relationship to the land and their spiritual ties to that land.

To be located is to have a ground from which to know, to act, to invite and deny, to share and ask.

Locatedness-identification with place is fundamental to Aboriginal people’s understanding of life all over Australia. (Rose, 1992, p. 106)

In her novel My Place, Sally Morgan describes her search for her Aboriginal heritage. On finding the people and land she was tied to by birth, Morgan says “We’d suddenly come home…we had a sense of place now.” (1987, p.230). By knowing where her people had come from, Morgan was able to identify as Aboriginal for the first time in her life. Knowing her land gave her a knowing of herself as Aboriginal: “What had begun as a tentative search for knowledge has grown into a spiritual and emotional pilgrimage. We had an Aboriginal consciousness now, and were proud of it.” (Morgan, 1987, p.233).

Morgan, like countless other urban Aboriginals, had been unaware of her Aboriginal heritage. Her immediate forebears had been removed from their traditional land, which removed them from their spiritual ties and led to a loss of identity for generations to come. “As dispossessed people, most Aborigines share the desire for the restoration of land.” (Linnekin, 1996, p.196). This restoration of land rights can be seen as vital to Aborigines in the part it plays in the restoration of their spiritual heritage and identity.

It is not only identity that is connected with the land for Aboriginals, but their very well-being. “Health…is not a simple matter of good diet…it is the outcome of a complex interplay between the individual, his territory of conception and his spiritual integrity; his body, his land and his spirit.” (Reid in Edwards, 2002, p.20). To remain well, and to keep the land ‘good’, a healthy interplay between the people and the land is required, along with a responsible attitude to the land.

Because of their special relationship with the land, an important part of Aboriginal spirituality is caring for the land. While it is only in recent times that the general populace has become concerned with environmental issues, being responsible and caring for the land has always been a part of Aboriginal spirituality and life. In order to survive, Aboriginals developed practices of environmental responsibility long before the appearance of white people in Australia. Fire was used not only in hunting, to trap animals, but also as a way of regenerating the growth of vegetation on the land. Animals were killed only for food or ceremonies, not for sport. If numbers of a certain animal were down, the Aboriginals would delay hunting them if possible until the next season. In this, the Aboriginals were acknowledging the connection between themselves and other living things, and with the land.

This connection was not something the Europeans immediately understood. “There were no insecticides then to kill birds, before the white man came. That’s why the blackfellas want their own land, with no white man messin’ about destroyin’ it.” (Morgan, 1987, p.181). Indigenous Australians have, as a result of their traditions and myths, an understanding of the land that it could be said white Australians have not always had. What was seen as useless land to the colonisers is now being appreciated as always having been necessary and nourishing (both in a material and spiritual sense) to Aboriginals.

Rose describes the importance to Aboriginals of being responsible owners of the land: “Living near dead relatives…indicates the intention to die in one’s own country and to join one’s forebears as benevolent and responsible ‘owners’ of country.” (Rose, 1992, p.73).

The importance of the land or country to Aboriginals does not diminish with death, nor does one’s responsibility to the land. Death is seen as returning home, to the Dreamtime. “In Aboriginal English (a) term for ‘dead’ is ‘home’…which refers to the disposition of parts of the once living human: bones should be returned to a person’s home country.” (Rose, 1992, p.69). In this way, Aboriginals remain tied to the land even in death. The spirit that came from the land to inhabit the body is now thought to return to the land.

Another important part of Aboriginal spirituality is their concept of Law. “What law seems to be most fundamentally about is relationships. Dreamings determined sets of moral relationships…country to country, people to country.” (Rose, 1992, p.56).

The law was passed down to the people through the dreaming, telling them how to behave and how to care for the land. All moral issues and codes of conduct come from the law. The Aboriginal peoples’ strong ties to their land can also be explained in terms of the law – “‘Everything come up out of ground – language, people, emus, kangaroos, grass. That’s Law.'” (Hobbles in Rose, 1992, p.57). The law is inextricably linked with the people and the land.

The importance of country to the Aboriginal people cannot be overstated – it is a part of their heritage, culture, identification, and spirituality.

The Importance of Land. (2016, Jun 26). Retrieved from http://studymoose.com/the-importance-of-land-essay 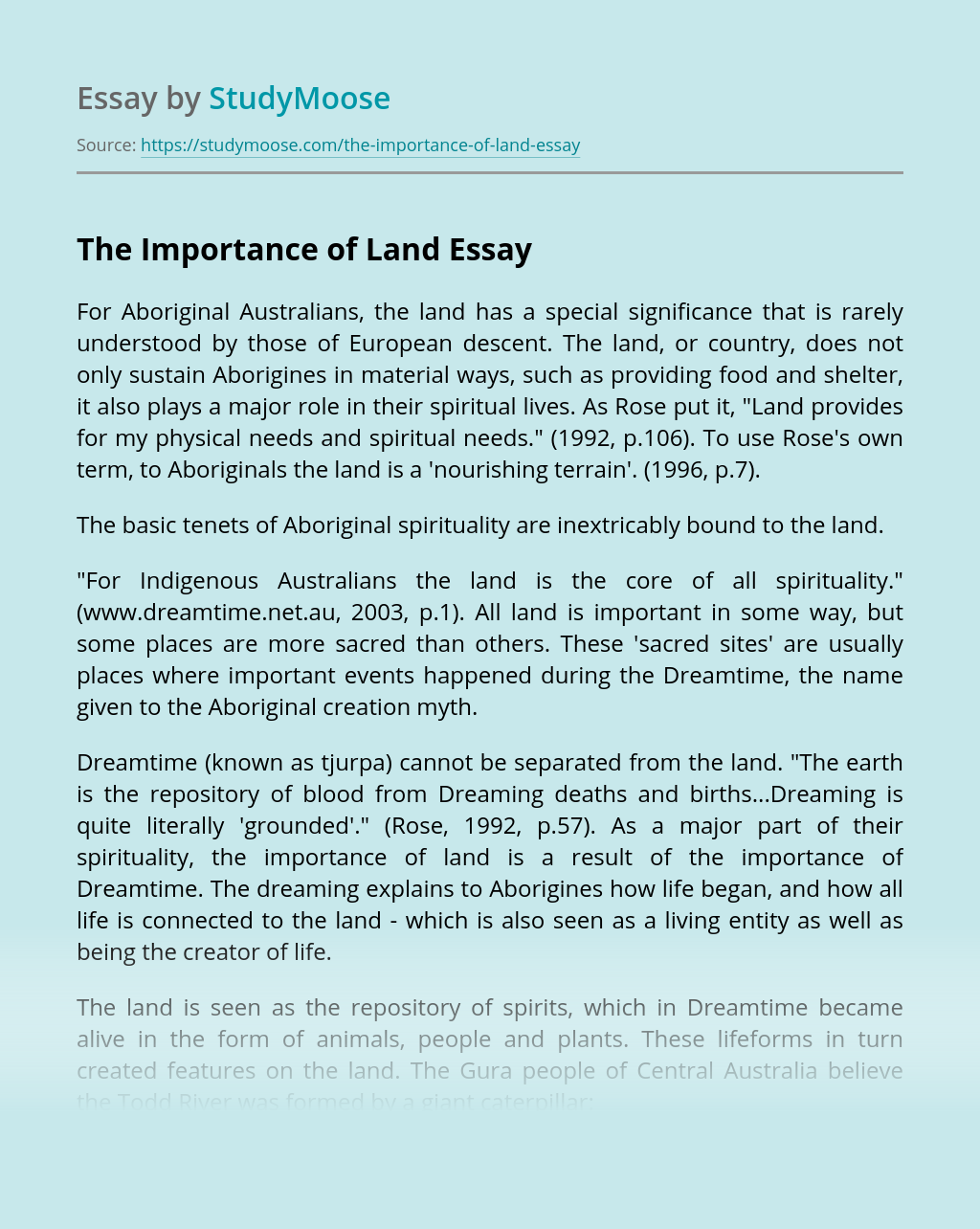 Don’t waste time
Get a verified expert to help you with The Importance of Land
Hire verified expert
$35.80 for a 2-page paper
Stay Safe, Stay Original