The Importance of Keeping Appointments in Army

I am writing this essay as a plan of action because I managed to miss a scheduled appointment. Missing a scheduled appointment may seem like a rather minute infraction but if you think about it and trace it back far enough it has a negative impact on all parties involved it effects the army as a whole, the government, tax dollars, every American and possible most of the population of the planet even if they don’t know it or feel an impact from it on some level even if insignificant it effects civilization as a whole.

Don't use plagiarized sources. Get your custom essay on
“ The Importance of Keeping Appointments in Army ”
Get custom paper
NEW! smart matching with writer

I had an appointment with the Army Substance Abuse Program scheduled for Tuesday the 13 of November at 13:00 in the afternoon.

On this particular Tuesday I was also scheduled for an appointment with my son off-post. These two things were an obvious scheduling conflict and would had require my wife to call off from work to be able to take my son to his appointment, in order for me to attend the scheduled appointment that was with the Army Substance Abuse Program.

Regardless of whether this actually happened or not it was my responsibility to make it happen, both for me, my kid and the army to attend my appointment. I ultimately failed to attend my appointment and as a result I was negatively counseled for my actions and lack of reasonability. In this counseling I was instructed that my plan of action would be for me to write a one thousand word essay due to the fact that I missed the scheduled appointment and I was instructed that it would be due to be turned in no later than Monday the twenty sixth of November.

It is always important to be where you are supposed to be. In the Army, every leader stresses the fact on being on time or being at the right place or being in the right uniform. So if you have to ask yourself is it important to be where you are told to be? I think most Soldiers and Leaders will tell you that is very important. It is my responsibility to be where I am supposed to be, it is all about accountability. You have to keep track of your appointments and it’s your responsibility and your leader’s responsibility to make sure you plan ahead for your appointments. They are responsible for your actions as well as you. In the articles of military justice a Soldier can be charged with Article 86 of the Uniform Code of Military Justice (UCMJ), 10 U.S.C. 886, makes it a crime to fail to go to one’s appointed place of duty at the time prescribed, to leave one’s place of duty, or to be absent from one’s unit without authority. There is tremendous discretion vested in a military commander to determine what, if anything, to do about a particular violation. Often a first transgression is dealt with by minor punishment, such as loss of leave, privileges, or extra work assignments. More aggravated cases may result in administrative discharge rather than by referral to court-martial. Intentional behavior, such as coming in late to miss deploying with his unit to an unpleasant location, can result in an unpleasant court martial. This is further in detail of what the charges are:

Failure to go to appointed place of duty

Going from appointed place of duty

The Article 86 of the Uniform Code of Military Justice also covers Point and Place of Duty. That means from PT formation to COB, that is where you are supposed to be. What a lot of Soldiers do not understand that includes appointments made by them or someone else. We have appointment times, formation times and many other start times that dictate we will be there. If a Convoy has a time of fifteen hundred hours and the Soldiers decide to show up late because they did not feel like getting ready on time people could die. If they rolled out on time, they may have avoided an ambush. It sounds extreme but time management plays a critical role in the Army. When you make an appointment, that spot has been reserved for you. That means if you have been given the last slot someone else is going to have to wait for another one to open up. This could be one day or one month. And because you missed it someone else is still going to have to wait when they could have had that spot and been there. If you are going to miss the appointment or cannot make it due to mission or other circumstances they do allow us to cancel the appointment with in twenty four hours.

The Importance of Keeping Appointments in Army. (2016, Mar 19). Retrieved from https://studymoose.com/the-importance-of-keeping-appointments-in-army-essay 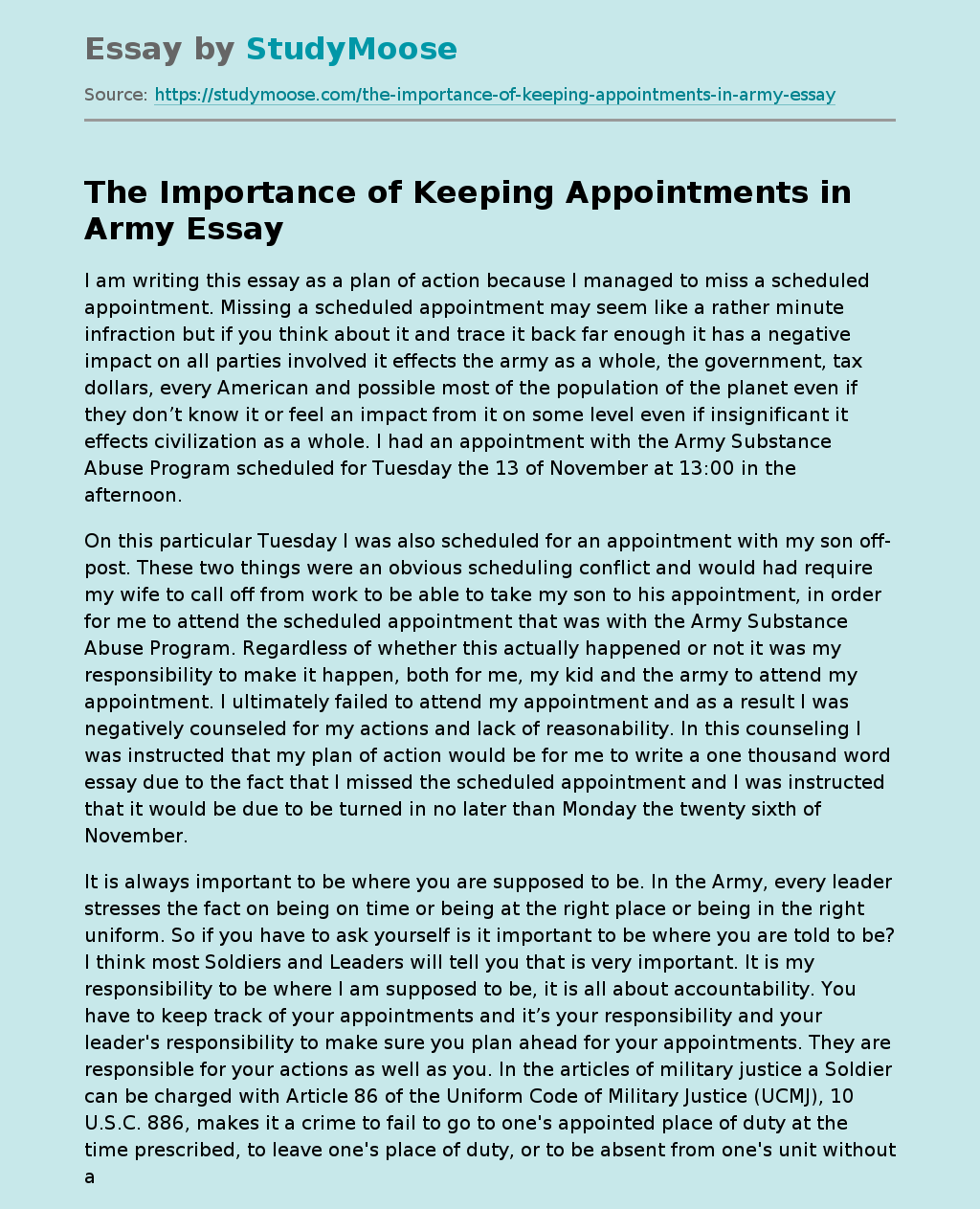