The Importance of Food Labeling

The Importance of Food Labeling
It’s Important that food producers label foods so that people can choose to avoid irradiated or genetically modified food. Also, food labeling is crucial to people with certain food allergies. Some foods are irradiated to clear foods of food-borne diseases and provide support for unsafe factory farming practices. When food is genetically modified the food is engineered with different strains of DNA mixed with different proteins and unnatural chemicals which lead to different health risks.

Don't use plagiarized sources. Get your custom essay on
“ The Importance of Food Labeling ”
Get custom paper
NEW! smart matching with writer

Food labeling is also important because it informs consumers about the certain ingredients in processed foods that some people are allergic to. Labeling foods that have been modified trough genetic engineering let’s people know that their food has been genetically altered.

Genetic Engineering involves the embedding of different strains of DNA and the bringing together of a variety of bacteria and unnatural chemicals. There is still a lot of unknown risks about the effects of consuming food that has been genetically modified because scientists have not examined it enough Genetically Modified).

There are However some studies that show some foods that are genetically engineered have potential to create new allergies that can be deadly. For example, when a gene from a soybean is mixed with genes from other plants and bacteria, a new protein is created, and the protein can set of reactions in the human body because the crops with herbicides that leave behind a residue that is consumed with the crops, According to a report in 2004 by the Institute for Responsible Technology, the effects of consuming genetically modified soybean crops sprayed with herbicides involved people developing “irritable bowl syndrome, digestion problems chronic fatigue, headaches, lethargy, and skin complaints, including acne and eczema, all related to soy consumption.

It is also possible that glyphosate’s breakdown product AMPA, which accumulates in GM soybeans after each spray, might contribute to allergies” (Genetically Engineered).

The only way to tell if food has not been changed genetically is to buy food that is labeled organic (Ji.). Because certified organic foods are not genetically modified. “Seventy percent of processed foods contain something that is genetically modified” (Food Inc.). Labeling genetically modified foods is important because of the potential risk to humans. Labeling irradiated foods gives the people the option of avoiding foods that have been irradiated. The Centers for Disease Control and Prevention define food irradiation as “a promising new food safety technology that can eliminate disease causing germs from foods” (Food Irradiation). Along with treating food to rid it of food-borne diseases, another purpose for irradiation food is to increase the shelf life of food. In addition, food irradiation provides support for unsafe factory farming practices. Most factory farming food producers have grown into large scale conventional farming which has lead to unsafe and inhumane farming practices.

Due to large demand of meat, the meat industry doesn’t take time to fix those mistakes until its too late. Modesto Meat Valley recalled a million pounds of meat contaminated with E-Coli between Oct. 2, 2009 through Jan. 12, 2010 (Clark.). E. coli and Salmonella outbreaks have become more frequent in America, whether it be from spinach or jalapenos. In 2007, there were 73,000 people sickened from the E. coli virus(Food Inc.). After many cases of similar incidents many factory farmers that produce meat welcomed food irradiation to save the face of their meat products because food irradiation covers up some of the food industries mistakes. Irradiated foods are foods treated with controlled amounts of ionized radiation. The CDC explains the amount of radiation used as 1 Kilo Gray is equal to getting your chest x-rayed 333,000,000 times, 2,000 times the lethal dose for humans and can even reach 30 Kilo Gray which is 990,000,000 chest x-rays which is 60,000 times the human lethal dose (Ji.). Herbs and spices are nuked with 30 Kilo Gray to sterilize and 4.5 Kilo Gray to rid meat of bacteria. Even though the FDA has repeatedly declared the safety of irradiated foods, they have yet to provide proof that food irradiation is indeed safe.

The FDA informs us that during their studies their have been no evidence of irradiated foods having adverse effects during their well-controlled trial. According to a 2001 report by the World Health Organization, Food and Agriculture Organization/International Atomic energy Agency (FAO/IAEA)’s research in 1999 indicated that certain irradiated foods mutated and were toxic to cells in 10 lab animals and one human after being irradiated (Worth). Irradiated foods are labeled with the radura symbol but, food served in restaurants or added as minor ingredients that are irradiated themselves, are not labeled. Labeling foods that have been irradiated is important because it gives people the option to avoid irradiated foods. Labeling processed foods is important because some foods contain ingredients that people are allergic to. These ingredients can cause life threatening reactions.

There are many food allergies and food producers must label foods that have any of the major food allergens in them, like milk, eggs, fish, shellfish and tree nuts. According to the FDA two percent of adults and five percent of infants and young children have allergies in the United States and 30,000 people are treated in emergency rooms per year from eating something that they’re allergic to. The FDA also says that one hundred and fifty people die from allergic reactions from eating foods with ingredients that they’re allergic to (Food Allergen). It is important for food producers to label foods so that consumers know if the food has been genetically modified, irradiated and if the food has ingredients that people might be allergic to. Genetically modified food should be labeled because there is not enough research on the effects of eating GMFs. Irradiated foods need to be irradiated to give people the choice to avoid it, and labeling foods in general gives informs consumers what in their food.

The Importance of Food Labeling. (2016, Mar 20). Retrieved from http://studymoose.com/the-importance-of-food-labeling-essay 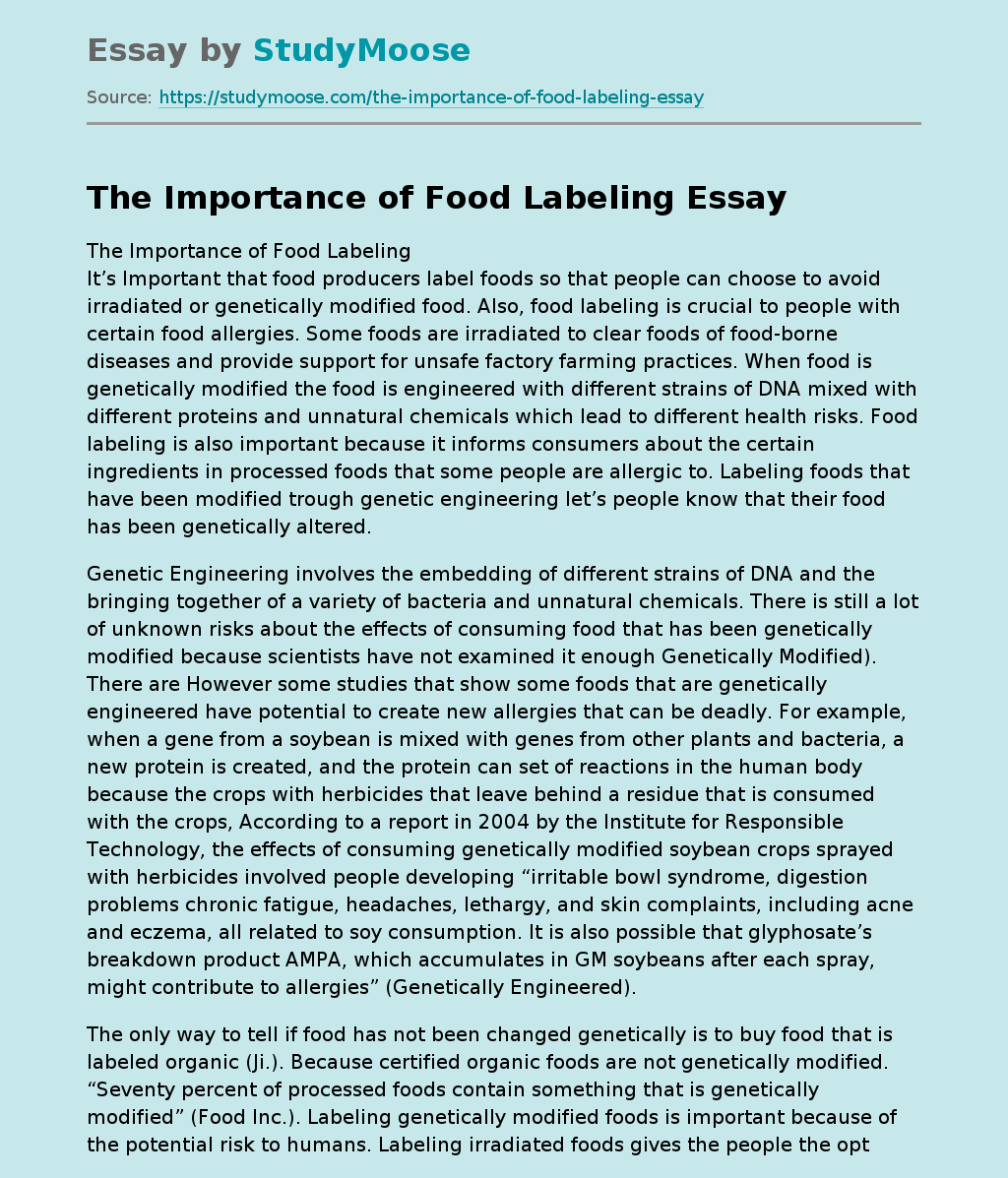