The Importance Of Emotions In Logical Reasoning & Decision Making

Emotions are important because they are essential in controlling almost everything we do, say, or think. If a person lacks emotions they lack the ability to make smart choices and decisions. This can fall in the category of logic. Logic is pretty much another word for common sense, it is a necessity in everyday life and making the right (and sometimes wrong) decisions. For example, if somone makes a bad decision such as trusting someone who double crossed or lied to them, they would get a bunch of mixed emotions (sad, mad, ashamed).

Don’t waste time
Get a verified writer to help you with The Importance Of Emotions In Logical Reasoning & Decision Making
Hire verified writer
$35.80 for a 2-page paper

If a similar situation was to present its self again they would be reminded of what they felt before, gather knowledge, and then make a decision, and hopefully a better one using Logical reasoning and experience.

University of Iowa neurologist, Antonio Damasio noticed that his patients that lost the part of their brain that controlled their emotions, their thought process went haywire and made their decision making abilities very poor.

Their intelligence was still completely intact. But without emotions influencing the intelligence, Logical decisions could not be made on things like what they prefer, favorite of something, and life choices such as where to live. This goes to Show that emotions are key in almost everything we do except things that do not require very much emotion such as Math.

Each and every emotion has its own appeal and affect in our decision making process / logic reasoning. I’m sure most are familiar with Isaac Newtons 3rd law of motion that states, “every action has an equal and opposite reaction”.

well the same thing loosely applies here. Whenever a situation arises, or a person interacts with another person in conversation this comes into play. basically meaning every emotion has an influence on what choices are made, or how they react to something. Let us say that John and Sean are having a heated argument. Tensions are rising and both people partaking in the conversation are starting to feel hate and anger towards one another. The argument continues on and on until John feels insulted by Seans choice of words. So John pulls out a gun and shoots Sean due to a combination of frustration and anger. John made his decision to shoot Sean solely out of his emotions.

Every emotion leads to different reasoning and decisions. There are tons of emotions and a bunch of reactions influenced by them, two emotions that are commonly used are sadness and anger. Although reacting with anger does not usually lead to positive thoughts or decisions, it is still a emotion that is used very frequent. Anger results from being displeased and is a reaction of disgust towards something and often leads to violence. Usually when someone is insulted or feels offended they become angry. When people act out of anger it is usually with aggression. In the earlier example with John and Sean, John ended up shooting Sean because John was Angry with what he said during the argument. The action being taken was the argument. John was offended by it so he reacted out of anger by shooting Sean.

Another common emotion more on the negative side is sadness. sadness is a reaction of adjusting to a loss, being unpleased, or just being stressed out. Someone might react with sadness from being neglected, or things not going in their favor. Long term sadness can lead to a state of depression, which nine times out of ten leads to a bad outcome.

Overall, emotions are very important. Understanding them and being in touch with them can give us a better outlook on day to day issues and situations. And by understanding how emotions influence decisions and the human thought process, one can better evaluate themselves and personal issues effectively. Still not convinced of the importance? Imagine life without true emotional feelings. where would mankind be if everyone lost the emotional side of their brains like the patients of Antonio Damasio?

The Importance Of Emotions In Logical Reasoning & Decision Making. (2016, May 01). Retrieved from http://studymoose.com/the-importance-of-emotions-in-logical-reasoning-decision-making-essay 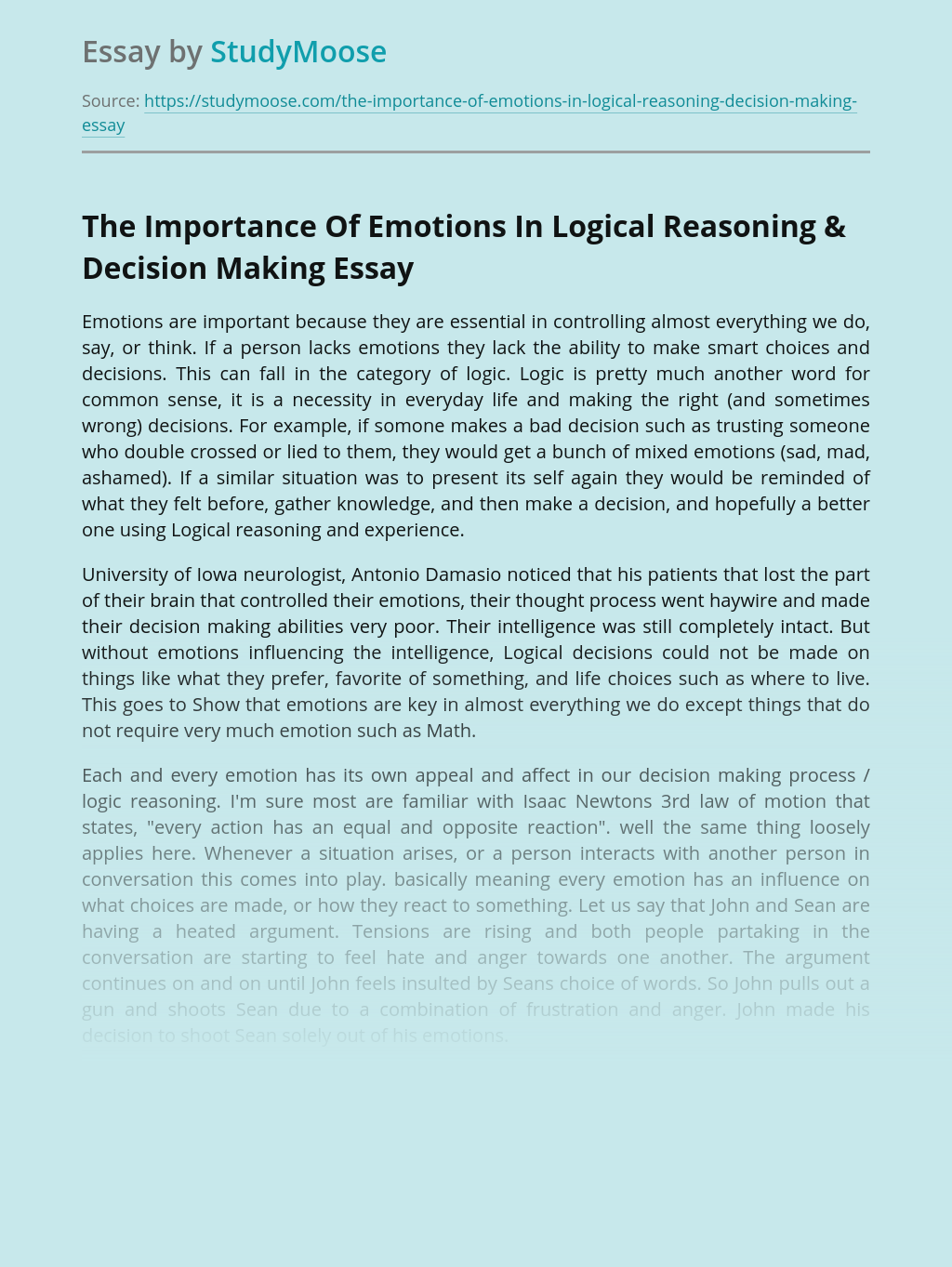 Don’t waste time
Get a verified writer to help you with The Importance Of Emotions In Logical Reasoning & Decision Making
Hire verified writer
$35.80 for a 2-page paper
Stay Safe, Stay Original