"The Importance of Being Earnest" and Victorian Society

The play “The Importance of Being Earnest” which was written and set in 1895 (Late Victorian Era) is heavily influenced by the patriarchal society of the time; this society valued men more than women. A central theme in the play is focused around the social roles of men and women and how they interact with each other during this time. Gwendolen is seen to be a typical Victorian woman on the surface, although she does not conform to typical Victorian standards and necessarily meet the requirements for her to be seen as ‘lady’ based on her actions and commentary during the play.

Don't use plagiarized sources. Get your custom essay on
“ “The Importance of Being Earnest” and Victorian Society ”
Get custom paper
NEW! smart matching with writer

Wilde presents the women in a way that contrasts with how powerless they are in society as a norm as he creates headstrong female characters who have the ability to influence the men’s choices as well as being able to make their own. An example of this is that the women are able to choose their partners, women were rarely given this choice, instead their fathers, brothers or even uncles would be given the control over who the women had interactions with, especially if they were of romantic interest and were considered as being suitable husbands.

For example, Gwendolen breaks traditional Victorian gender roles by dismissing her aunts instructions when she is asked to wait in the carriage after accepting Earnest’s (Jacks) proposal without permission, later when she has to obtain permission, she does not go to her uncle ‘Lord Bracknell’, instead she asks her aunt, Wilde places Lady Bracknell in a position of power which is quite intimidating; in the first act Algernon’s behaviour seems rather erratic, from inspecting” sandwiches to informing Jack they are specifically for his aunt, from this we can interpret that he is intimidated by Bracknell, We are already aware that her social standing is quite respectable as her title (Lady) suggests, however as the play moves forward we are introduced to the idea of a female character ultimately having much more power and influence than any of the other characters we’re introduced to.

It’s unusual for a woman during the Victorian times to be so dominating and in control yet Gwendolen and Cecily also appear to have a great deal of power over their male partners. For instance, Jack and Algernon desperately attempt to christen themselves ‘Ernest’ purely because Gwendolen and Cecily threaten to withhold their affections from them as they are not ‘Ernest’ by doing this they essentially force Jack and Algernon into changing their names in order to be with them. Although they have some power, it is clear that Wilde created Bracknell’s character to play out stereotypical male roles, Algernon/Banbury cannot be described as masculine, instead of during this time he would have been regarded as being ‘dandy’, meaning ‘a man who pays great attention to fashion and often dresses with a flamboyant style’, This is not something that Wilde chooses to disguise, instead Algernon embraces what could be described as his ‘feminine’ side and continues to brag to Cecily  “I never have any appetite unless I have a buttonhole first”. It is clear that Wilde’s aim is to present Lady Bracknell as most masculine in the play especially in comparison to her nephew.

Another way Lady Bracknell exercise her power is when she ‘pretends’ to know of politics in order to decide whether ‘Ernest’ can be considered a worthy candidate in regards to Gwendolen’s engagement ‘oh they count as Tories. They dine with us’. This shows off her masculinity as women at the time did not have the right to vote and wouldn’t have held much of an opinion about political views or the political state of the country.

"The Importance of Being Earnest" and Victorian Society. (2019, Dec 12). Retrieved from http://studymoose.com/the-importance-of-being-earnest-and-victorian-society-essay 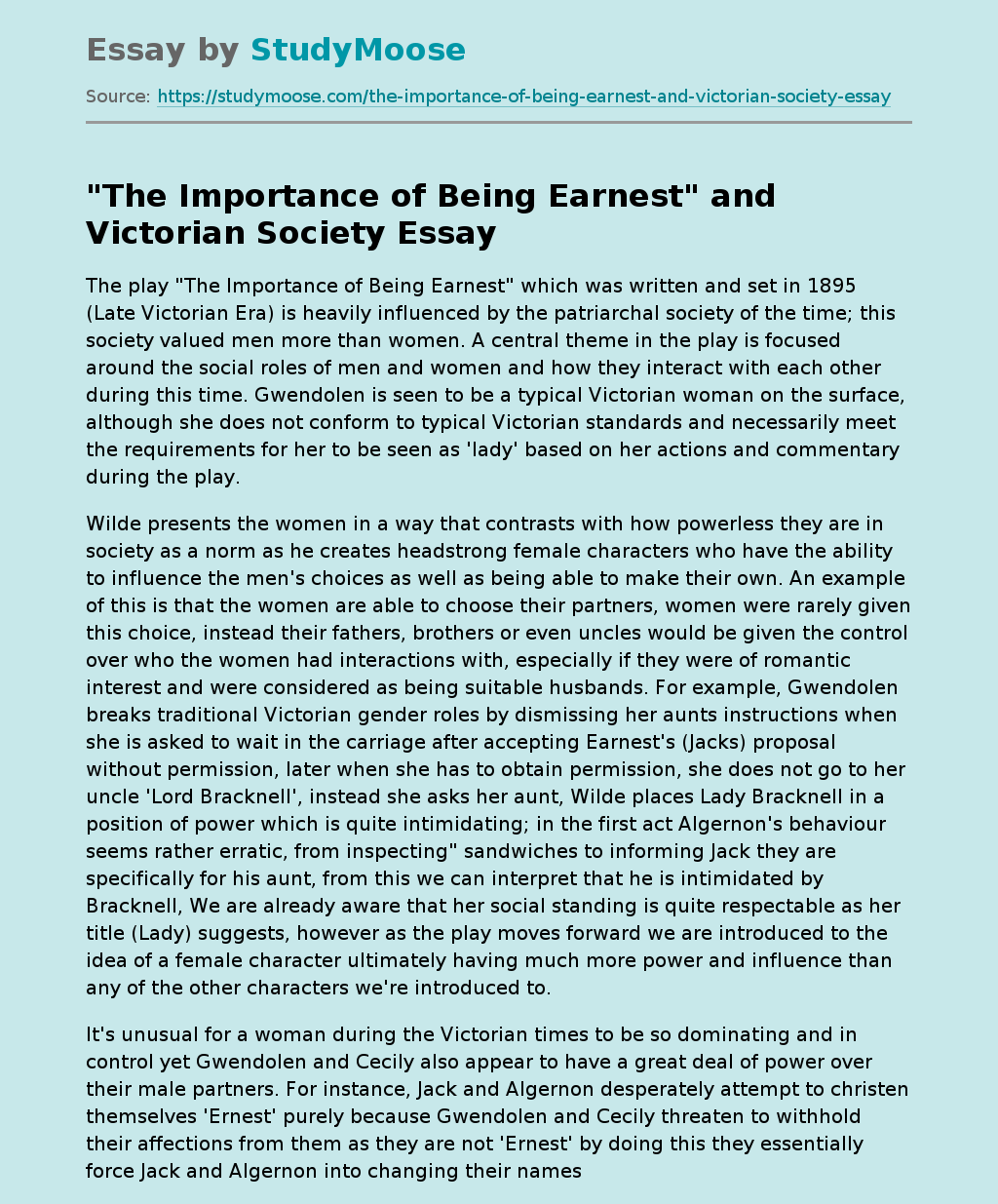