First, what is a skill? The best definition I found is, a learned power of doing a thing competently: a developed or acquired aptitude or ability. (_Merriam-Webster’s Third New International Dictionary Unabridged,_ http://www.mwu.eb.com.ezproxy.apollolibrary.com/mwu) There are so many skills that people should master to make life richer, more meaningful, or simply easier. But to choose a skill that most people have not mastered that I believe everyone should master is Basic First Aid (BFA).

Don't use plagiarized sources. Get your custom essay on
“ The Importance of Basic First Aid Training ”
Get custom paper
NEW! smart matching with writer

Most people who I know personally which have completed the Cardio Pulmonary Resuscitation (CPR) certification have not completed BFA certification. The mistake in allowing this to happen was very apparent in my first CPR course. I received BFA training as a teenager. Some of the questions asked in the CPR class by students seemed evident to me. Not only that but the fact that people were being certified without knowing these things seemed dangerous to me. For instance, in the case of an accident scene where someone has arterial bleeding, one does not want to start chest compressions before trying to stem the bleeding.

A person should know not to move a person with probable neck injury unless not moving them will result in near certain death.

In the workplace not many people are aware of BFA. And in my experience there have been plenty of instances where it was needed. One such time, one of my employees was an epileptic; he fell flat seizing in the copy room, one person ran to call 911, but the others just stood there.

BFA had taught me to place something soft under his head (the floors in the copy room were hard ceramic tile); during seizure he could have hit his head hard enough on the floor to cause brain damage. In BFA one is taught to use a hard, strong object to keep the person seizing from biting his, or her tongue.

Another place rife with accidents is the schoolyard. If one is a teacher, knowledge of BFA is definitely important. I think it should be a required certification of teachers. A teacher’s main duty is not to doctor children; nevertheless what is taught in substitute training, (in my county) is nothing short of ridiculous. What is taught to substitute teachers and paraprofessionals is to never help a bleeding child without gloves; and if at all possible, let the children care for the wound themselves. High school students might be able to doctor themselves; what about elementary school students, can they administer their own first aid? Who is going to see a five year-old bleeding and just point them to the sink? If school employees were taught BFA the School Board would not have to be so afraid of legal actions. The Good Samaritan Act would protect the employee and the school.

Not everyone works, or goes to school, but here is an example that will fit most others showing that everyone can benefit by learning BFA. At home, especially if one is a parent knowing BFA can truly be life saving. When my son was five years old he fell and slid on a piece of glass, slicing to the bone about six inches on each side of his tibia. My brother-in-law brought him in the house carrying him by the arms (legs hanging down). First of all had he known BFA, he would not have been holding him in such a way as to increase the bleeding. By the time he made it t into the house with him, he had lost a large amount of blood.

I grabbed him and sat him on the counter, clasping both sides of his legs and applying pressure, to stem the bleeding. By the time we arrived at the hospital my son had lost so much blood that without giving him donated blood, (which for reasons not disclosed here we did not want to do) they could not give him anesthesia before surgery. According to the doctor, if someone had not slowed my son’s loss of blood he would have died. Not just parents though. Even if a person lives alone knowing BFA can be essential. I cut the tip of my finger off (no bone) I knew to put it back where it belonged, wrap it up, and get to the hospital. They were able to reattach it. These are just two cases of many in my years that knowing BFA has made a true difference to someone. And living with elderly parents, even siblings with illnesses, knowing BFA can mean the difference between life and death.

In conclusion, in the workplace, at school, around town, and even at home, BFA can save lives. I do not believe that anyone could think of many families who have never had accidents around the home? Would any parent not prefer to know that the teachers all have BFA skills? I know personally that it has made a huge difference in my life and those around me. Having mastered BFA, CPR was a breeze to me. 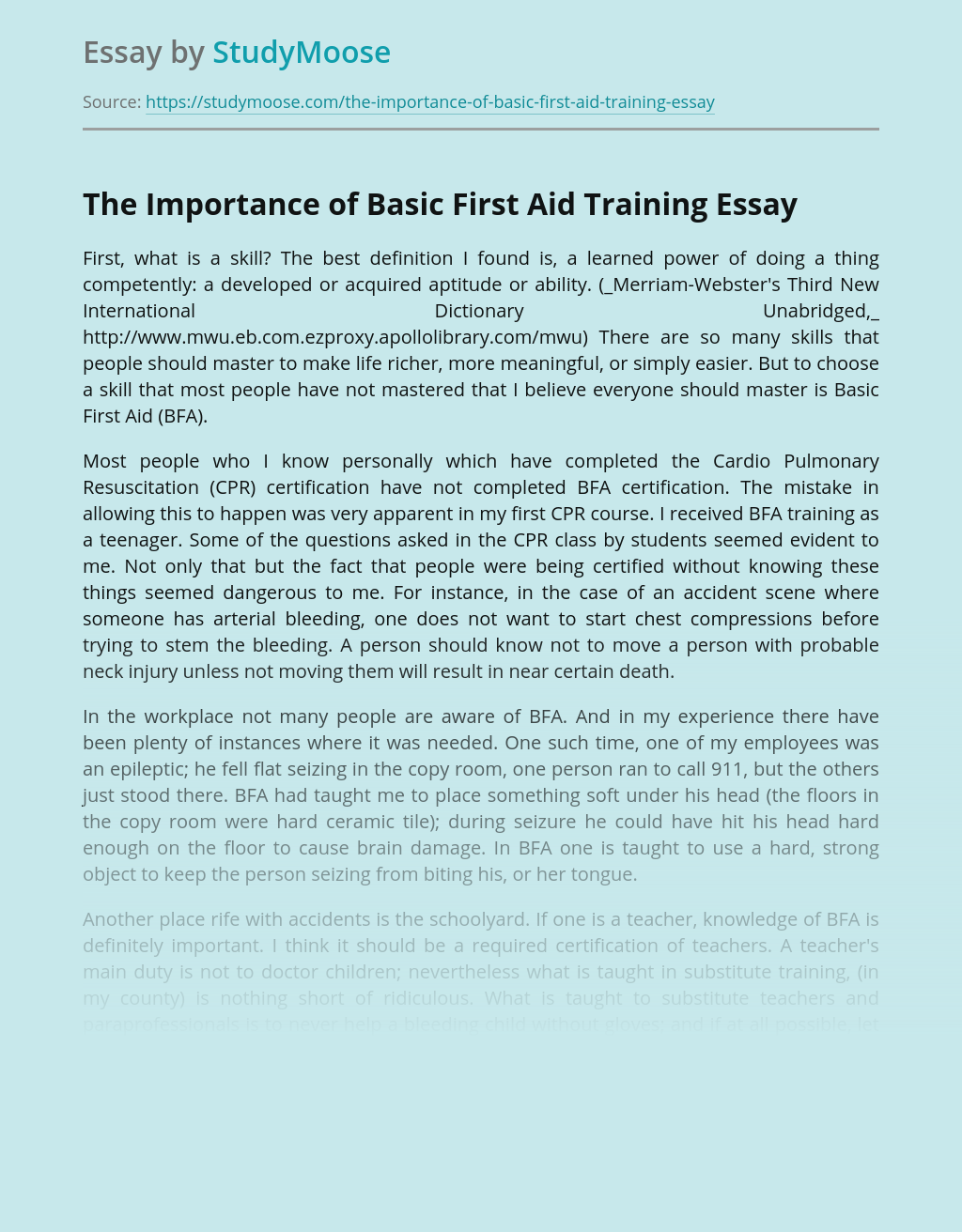