The Importance of a Parent Child Bond in King Lear

The strongest, truest love is that a parent and child share. Unconditional and forever, it incorporates every division of love. Although, the bond between parent and child can be held together with great strength, either, can hold a persona or can disguise a certain aspect of their character. Seemingly, in _King Lear_ it is quite evident that parents may not truly know what their child is capable of. Characters Lear, an aging king of Britain and Gloucester, a loyal nobleman to Lear both fall under wrongful impressions of their children and discover their misinterpretation when it’s just a little too late.

Don’t waste time
Get a verified expert to help you with The Importance of a Parent Child Bond in King Lear
Hire verified expert
$35.80 for a 2-page paper

Through Shakespearean playwright, we are taught to incorporate trust, loyalty and forgiveness in our own familial relationships based on those presented in _King Lear._

When parents and children misunderstand each other, sending indirect or unclear messages, problematic situations tend to arise. An example is in the opening scene of _King Lear,_ where Lear demands that his daughters pronounce their love to him. For his older daughters, Goneril and Regan this comes as rather tranquil, giving their father exactly what he wishes to hear. Goneril begins telling Lear “Sir, I love you more than word can wield the matter” (I.i.56), Goneril doesn’t say this out of love but out of opportunity, she wants her father’s fortune, her father, blinded by his own ego sees this as a pleasant and fulfilling response but clearly misinterprets her true colours.

He responds saying “To thine and Albany’s issues / be this perpetual” (I.i.68-69). In naivety and ignorance Lear grants Goneril her share of the fortune.

The true daughter, Cordelia, is called up to Lear to present her love and states “unhappy that I am, I cannot heave my heart into my mouth. I love your Majesty according to my bond, no more, no less” (I.i 93-95) “let truth be thy dower” (I.i.110). Lear incapable of truly understanding his daughter’s true intention within her response is furious. He quickly reacts, with no thought, and banishes her from the palace. Unknowingly, he’s losing on of the only real relationships he even has left in his life. Kent, another of Lear’s noblemen tries to present the truth to Lear by saying “thy youngest daughter does not love thee least, nor are those empty-hearted whose low sounds reverb no hollowness” (I.i.154-156), stating that his youngest daughter, Cordelia does not love him the least and is pure of heart, along with her words, that hold true meaning. A lesson Shakespeare teaches his audience, is that of looking deeper within an individual and deeper within the meaning of the spoken word.

The glue behind a genuine relationship is trust. Without trust, without loyalty any relationship whether it be between a parent and their child, friendship or partnership, can easily wither away and fall apart. Shakespeare proves that trust is the key to maintaining a healthy relationship with the character of Cordelia. She stays by her father’s side even after Lear had disowned her, she’s with him after her sisters, Goneril and Regan betray him. At this point in the play Lear realizes where he has gone wrong and can understand that Cordelia resents him, he says “If you have poison for me, I will drink it. I know you do not love me; for your sisters have done me wrong. You have some cause they have not.”(IV. vii.71-74). Cordelia replies with “Oh my dear father, restoration hang thy medicine on my lips, and let this kiss repair those violent harms that my two sister have in thy reverence made” (IV.vii. 26-29). Her support to Lear is an accurate demonstration of the power of _real_ love.

The nobleman, Gloucester, and his older son Edgar demonstrate another example of true loyalty. Edgar, his devoted son, was disowned by his father, another example holding true to “things aren’t always what they seem”. Edgar stays by his father’s side, even disguised as fool, beggar, and casual companion while Gloucester contemplates suicide. When Edgar first encounters his father he cries out, “My father poorly led? World, oh world! But that thy strange mutations make us hate thee life would not yield to age” (IV.i.9-12). Edgar’s immediately gets to his father. Taking on the disguise of a new character, yet again, Edmund takes his blinded father towards the cliffs of Dover. Rather than seek vengeance on a man who once wanted him dead, he finds forgiveness and stands by his father. Gloucester feels the guilt of abandoning his only true son saying, “Oh my follies! Then Edgar was abused. Kind gods, forgive me that, and prosper him” (III. Vii. 91-92). Edgar’s forgiveness was what held his relationship with his father together in the end, another lesson Sir Shakespeare has taught his audience.

Shakespeare taught his audience valuable life lessons through his playwright. The greatest gift of all is not the status we hold in society or the wealth we share among our thrown but the relationships we cultivate. Without the people in our lives we cannot explore new experiences or evolve. The people, who raise us, create us through how they nurture us. They are those we have a different form of love for. An unconditional deep love that holds truth, not the type of love that can easily be recovered after a breakup or a love that can wear off and disappear through a teenage naivety. Trust, loyalty, love, forgiveness, these words mean more than they present when experienced firsthand, all difficult to acquire and garner within ourselves. Once we have them in the relationships we maintain, we can achieve salvation. Shakespeare presents the relationship between Lear and Cordelia and Edgar and Gloucester articulately and in the art form of writing. Audiences read his plays to this day because of his tendency to pick apart the strongest most passionate human emotions that build and destroy us.

The Importance of a Parent Child Bond in King Lear. (2016, Jul 19). Retrieved from http://studymoose.com/the-importance-of-a-parent-child-bond-in-king-lear-essay 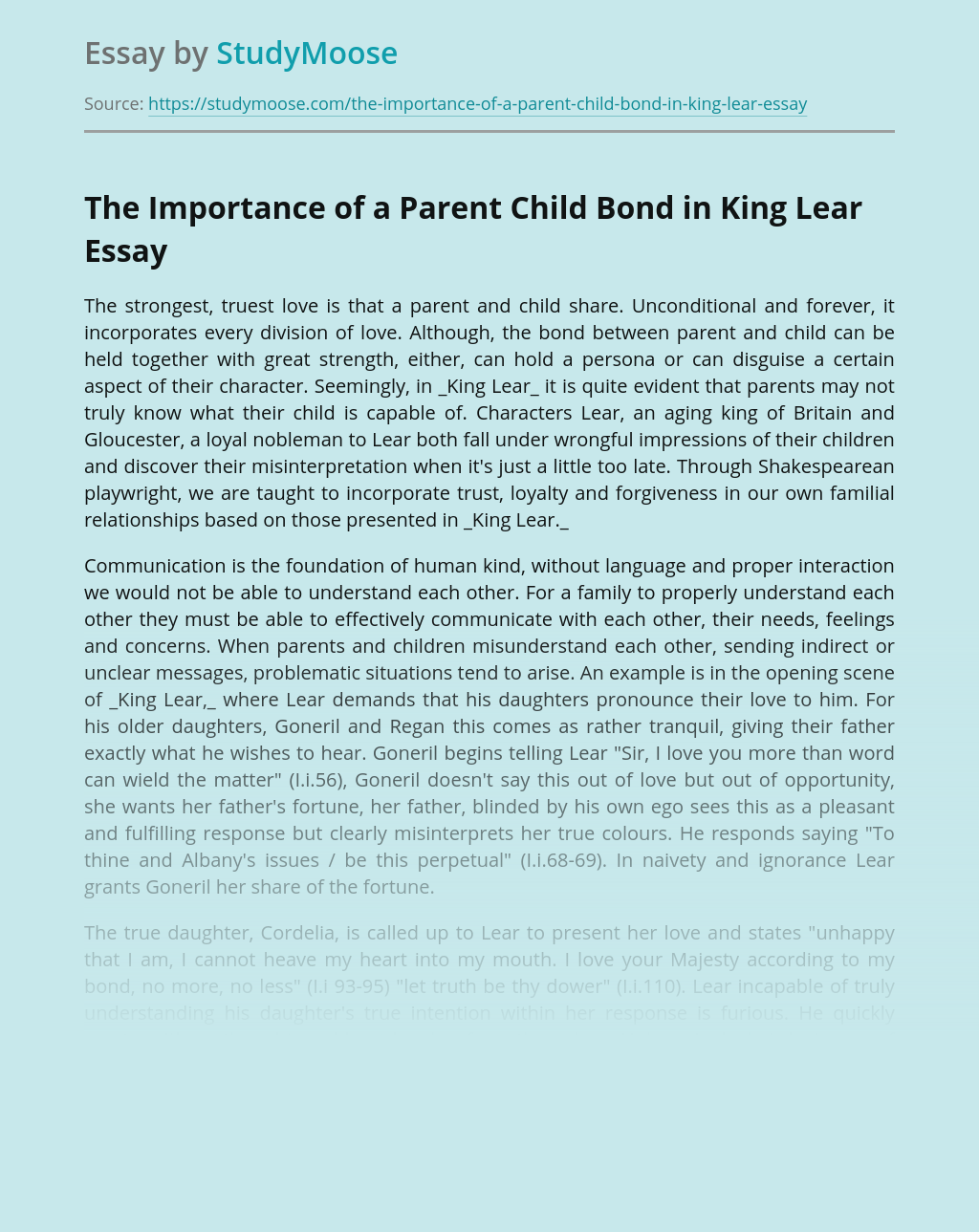 Don’t waste time
Get a verified expert to help you with The Importance of a Parent Child Bond in King Lear
Hire verified expert
$35.80 for a 2-page paper
Stay Safe, Stay Original