The Impact that Information Technology has on Society

Information technology has developed through the years. This has also had an impact had on modern society. The technological advancements have and are changing human kind forever. I.T. development has improved the life style of men and women all around the world. Efficiency and speed, of work and leisure is now at its highest level. Technology will keep on developing and at the same time life is going to be improved.

In my opinion I.T really started with the development of the first computer, the EDVAC.

Don’t waste time
Get a verified writer to help you with The Impact that Information Technology has on Society
Hire verified writer
$35.80 for a 2-page paper

This was a gigantic mainframe computer with no monitor, keyboard or mouse. After a few years personal computers were developed and now you can do things that you could never o before. This was all triggered by the first computer.

During 1945 John von Neumann wrote “First Draft of a Report on the EDVAC” in which he outlined the architecture of a stored-program computer. Electronic storage of programming information and data, eliminate the need for the more clumsy methods of programming, such as punched paper tape; a concept that had characterized mainstream computer development since 1945.

Hungarian-born von Neumann demonstrated prodigious expertise in hydrodynamics, ballistics, meteorology, game theory, statistics and the use of mechanical deices for computation. After the war, he concentrated on the development of Princeton’s Institute for Advanced Studies computer and its copies around the world.

In February of 1946, the public got its first glimpse of the ENIAC, a machine built by John Mauchly and J. Presper Eckert that improved 1,000 times on the speed of its contemporaries.

Programmed: plug board and switches

In the following section I am going to write about the impact that I.T. and computers have on Modern Society: More specifically there are four points I will be looking at and these are Employment, Life Style, Privacy and civil liberties.

I.T. has affected both the employer and employee severely in good and bad ways through out the years. Now work is more effective but the unemployment rate has increase due to the fact that robots and machines can do the work more efficiently than the average person. If you look at supermarkets every single product has a bar code, the creation of this has made the checking, buying and selling of the products much easier than before. Obviously with use of the barcode reader you can now check the price of any product automatically without the need of physically checking it.

In shoe factories where people used to make the shoes with their bare hands, now there are machines that do the work without the presence of anybody there. With the development of I.T., not only people have lost their jobs but also new jobs and careers have been created, for example the computer engineering career could not possibly exist before the creation of computers, but now with that career there are thousands of job possibilities.

Another example is that soon the stock market is going to be replaced by computers instead of stock runners and brokers because the calculations will be done faster and in more efficient way. With time robotics and machinery will keep up replacing people in any calculations or dangerous situations. Home workers on the other hand are going to access a whole new world of possibilities for doing their work.

The life style of the human race has improved in various ways. I will start with the basics. Television was probably the most important creation after sliced bread. First it was black and white TV with very few channels to watch, now a days you have satellite and cable TV with a large variety of channels, all with colour and high resolutions.

Television is only one example of these developments. I.T. has affected society and its life style in various ways. Language has changed, for example we now use words like chatting I the computer, and terms you would have never heard before.

The development of I.T. in the life style of human beings does not only have advantages, it also includes a series of disadvantages. Before the development of personal computers and games, people used to go outside and play physical games involving physical activity. Now people just stand in front of a television and enjoy themselves on their own. People are lonely now, and there are people who won’t even bother to go outside and make friends. Technology and I.T. have made people lonely and insecure.

Personal lives of people are now not as private as they used to be. Anyone can now just go on to the world wide web, and look up somebody’s life an disturb it. You can find all the personal information in a database and get all the information of a person (income, address, phone number). Criminals can even tap your phone lines and follow all the moves that somebody makes.

-Any organization holding personal information has to register with the Act, when they register they have to explain what kind of information they are going to store.

-The data held must have been obtained legally and only used for the sated purpose.

-The data must be protected from any unauthorized access and it cannot be given to any other organization.

In my opinion I.T. hasn’t affected civil liberties directly but it has democratized them. For example internet has not limited freedom of expression it has increased it by having more ways and other options to express your thoughts. All the civil liberties have been basically improved and expanded into new horizons. Companies can now just send products or information by just getting your personal information on a specific database. For example, when people buy products of any sort through the internet, if the webpage you buy at is not secure you can get your credit card (credit cards are usually the payment method used through the internet) number stolen and your money can just disappear. I.T. is very contradictory because it is making the world a more secure and better place but at the same time it is making the world a more lonely and antisocial world.

To conclude, I.T. helps people and it makes their lives more comfortable and easy, but at the same time it makes lives more problematic and insecure. I.T. development and its impact on society Is very important, but there are not only pros and cons. Employment, life style, privacy and civil liberties are very important on the technological world of I.T. and these keep on affecting society through time.

The Impact that Information Technology has on Society. (2016, Jun 27). Retrieved from http://studymoose.com/the-impact-that-information-technology-has-on-society-essay 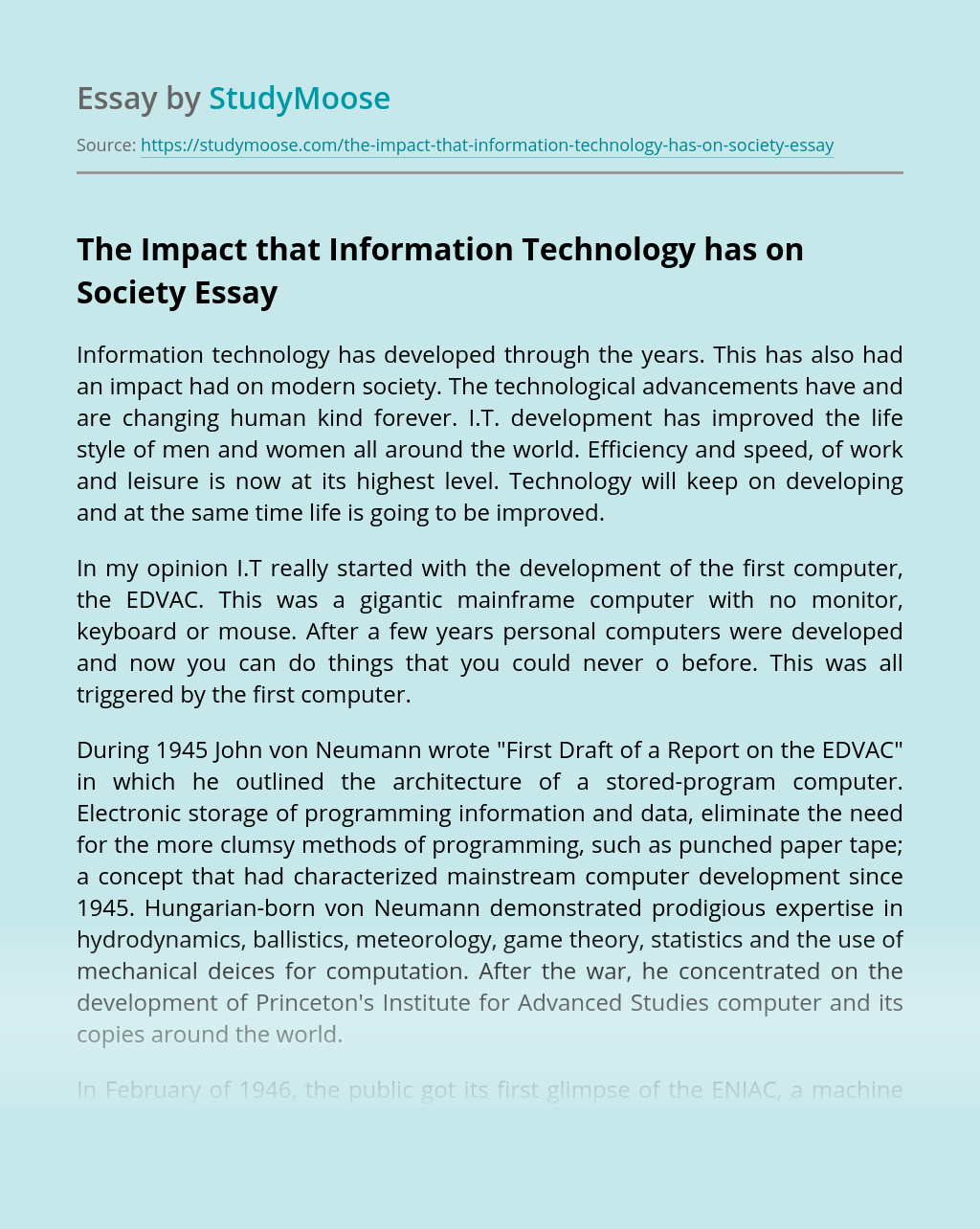 Don’t waste time
Get a verified writer to help you with The Impact that Information Technology has on Society
Hire verified writer
$35.80 for a 2-page paper
Stay Safe, Stay Original