The Impact of Using Gadgets on Children

In today’s society, it is quite common to have a cell phone hand at a time. Children born in this generation is called digital natives (Grail, 2011), and they rely on devices such as mobile phones, computers, games, televisions and so on to pass the time and play games. They pay attention into these devices but not care about their posture, screen brightness and screen distance from their eyes which can lead to influence their health and vision.

Based on the research by (BATES, 2013), stated that 29 percent of toddlers able to use electronic devices and 70 percent by referring to have become the master user during primary age.

Don't use plagiarized sources. Get your custom essay on
“ The Impact of Using Gadgets on Children ”
Get custom paper
NEW! smart matching with writer

According to the Michael Cohen Group (Group LLC, 2011) indicated (figure 1) there are 60 percent of children age 12 and below played touch screen devices frequent, while 38 percent of them play more frequent, it showed that gadgets has become the most favorable toys among the younger generation compare with traditional toys. In other words, these kids should have their own gadgets.

Proficient in: Disadvantages of Technology

Study by the Kaiser Family Foundation (Kaiser Family, 2010) assessment that children consume an average of seven and a half hours a day watching electronic screens. Time spending of using gadgets will increase when the age getting older. This literature review will focus on the impacts of use of electronic devices among children.

A study from the experts at Harvard School of Public Health in US (BEN, 2016), discover children who addicted to electronic more than 5 hours have the 43% of chance to become obese and bad eating habits due to have little physical activity.

They would rather spend their time at home staring at screens than play with other children at playground or participating other outdoor activities. This sedentary lifestyle would affect the children to stay away from sports and couldn’t cultivate their interest and hobby in sports or athletics (HRF, 2018). (CGTN America, 2015) found that a child needs to jump, fall, run, plays to build up immunity and get in touch with nature. More and more children are being affected by so much natural joy and exercise in their lives, which is one of the reasons why obesity has stayed so high. The children can’t control their normal food intake when having a tablets or smart phones in front of the table. They would either eat too fast or too slow as they only focus on the screen instead of the food. Therefore, it will their gastrointestinal and digestive system and caused childhood obesity.

Furthermore, use of electronic devices can impact gadgets and mental health of toddlers such as increase the risk of anxiety, child depression, problematic child behavior and attention deficit hyperactive disorder (ADHD). This will lead to one person become restless, twitchy, can’t concentrate and easily get distracted and thus influence the children behavior towards performance at school and at home (Sundus, 2018). For example, a child becomes a gadgets addicted and couldn’t pay attention on other things other than screen and caused him falling grades in the exam. A study from the PEACH project (Aby, 2015) in 1000 children age between 10 and 11, found that the children who consume more than 2 hours in screen or other gadgets were more likely to have psychological issue. Whereas, children with more moderate physical activity performed better on the emotional side and were capable to figure out peer issues. This suggests that active play not only makes children physically healthier, but it also makes them mentally and emotionally healthier.

The Impact of Using Gadgets on Children. (2021, Mar 04). Retrieved from https://studymoose.com/the-impact-of-using-gadgets-on-children-essay 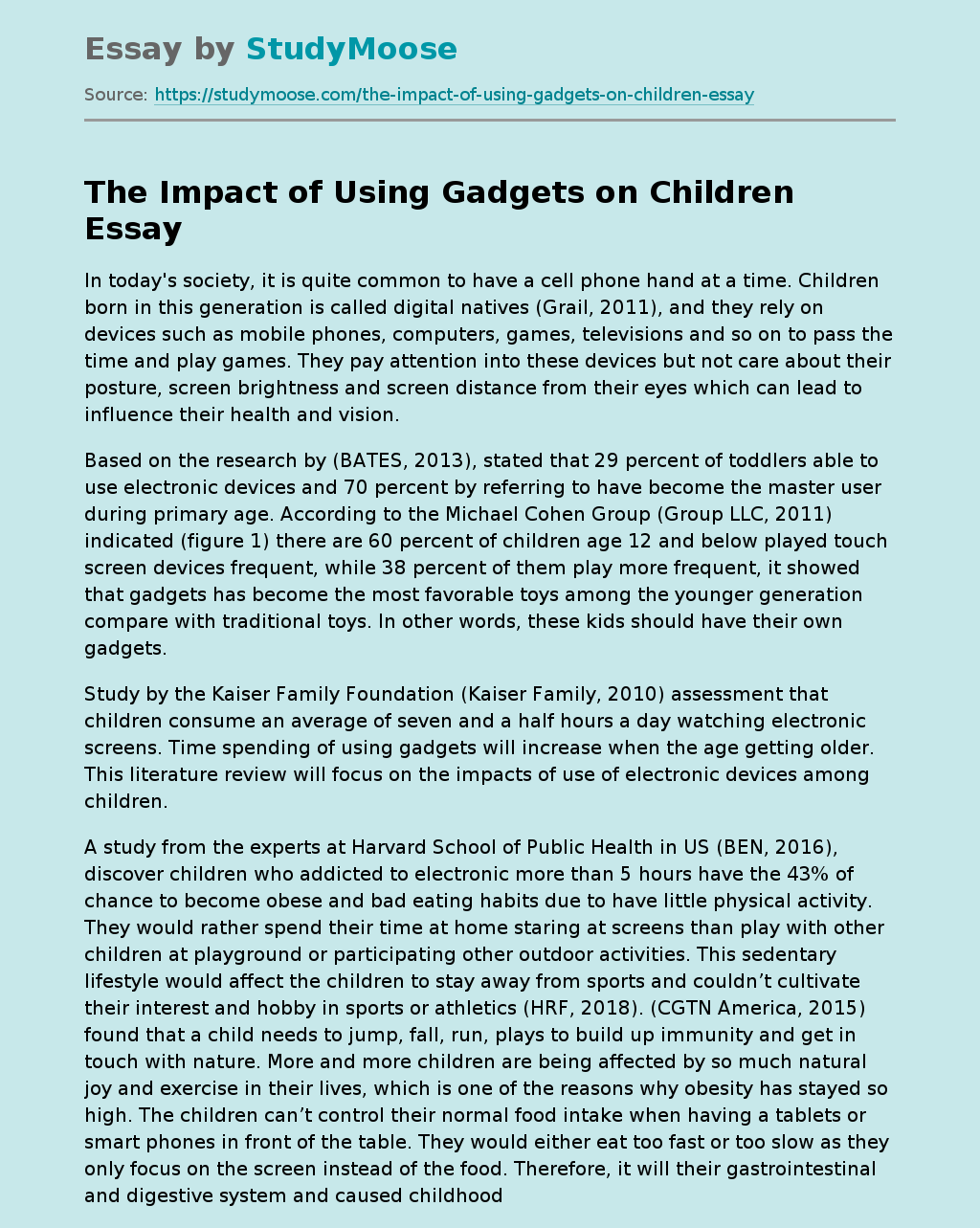