The Impact of Mass Media on the Music World

Through the growth of mass media music has been reshaping industries and providing new business strategies all while introducing new ways to organize production and distribution. Mass media has a huge impact on the lives of men, women, young adults, and children in the world today. Media comes in the forms of movies, television, radio, and the new social media networks of the internet helps to connect all individuals to one another around the world. It has had a huge impact on its audience on the way they dress, behave, and talk to others.

Don't use plagiarized sources. Get your custom essay on
“ The Impact of Mass Media on the Music World ”
Get custom paper
NEW! smart matching with writer

Businesses use these social platforms to engage with their customers and market their goods and services. In addition to this, artists also use social media platforms to promote themselves and interact with fans. This change in how society uses the internet has also guided a huge change in the way music is sold through technology; however, the internet and all the changes have not all had a positive impact on music and how its audience gets it .

Proficient in: Impact Of Technology On Communication

Before the internet was thought of music was distributed by oral traditions or either fact-to-face interactions between people. Taylor states, “All around the globe new music is being made which takes the world’s myriad musical traditions, with all their power and eloquence, and injects them with the intensity and urgency of Western pop, using the full palette of contemporary instruments and state of the art techniques” (Taylor 4). During the time of no internet music was told down from generation to generation mass production of music was not a thing.

If one wanted to record a song and get it out to the world he would have to record it multiple times just to produce multiple copies of the song. Each record was original, the artist had to use his talents over and over to make the same song with the same voice on each record.

Social media’s use in music has also incredibly boosted getting new merchandise (music) into the hands of fans. Like Manuel states, “As a result of the expansion of extant modes of musical production and dissemination and the advent of new technologies such as cassettes, CDs, video compact discs, and the Internet; the effective compression of the world by intensified media networks, transport facilities, diasporas, and the globalization of capital, which has increased the transnational circulation of world popular musics and their availability in the West; and an exponential growth from the 1990s in the number of scholarly and journalistic studies of world popular musics” (Manuel 47/90). Before the rise of the internet the only way for musicians get their albums out were to interact with people face-to face. The way one might promote their music was walking from house to house, walking around the mall, out the back of their trunks, or even just posted on the street trying to get their music out.

With the internet still on the rise, artist have a much easier and extensive range of selling and distributing their merchandise. Physical copies of music are now outdated as everything can be downloaded on a mobile device and enjoyed instantly. The digital age that we live in now has led to multiple streaming services all over the world. These streaming services include things like: Spotify, Tidal, Apple Music, Spinrilla, and even MyMixtapez. You can go on these services and decide whether you like the music and want to listen to it before you download it to your device.

YouTube was also a big streaming service that allowed artist to make music videos to reach its audience. It allowed companies to upgrade their marketing strategies to advertise music and merchandise to the fan base. YouTube has brought the rise of multiple artist including, Justin Bieber, who got famous after a video was posted of him on YouTube singing and playing the guitar. It is stated that, “Each of us – ethnomusicologist, musician, avid amateur, passive listener – will increasingly encounter the music of the world in a growing variety of ways, drawing us ineluctably into a world, the identity and culture of which is no longer separable from our own lives” (Bohlman 150).

Friends also use social media platforms to put you on to music that you might have never thought to listen to. Music that might pop up on their timeline might be different from the music advertised on your timeline. Conversating online also helps one to know the popular artist in all of the different genres of music. Music is now a part of everyone, and one cannot separate from it no matter what one does. Music is all around us and will forever be in the world we live in now.

Music can influence one’s life in many ways and can have different effects on everybody. Byrne states, “Hearing the right piece of music at the right time of your life can inspire a radical change, destructive personal behavior or even fascist politics. On the other hand, music can inspire love, religious ecstasy, cathartic release, social bonding and a glimpse of another dimension. A sense that there is another time, another space and another, better, universe. It can heal a broken heart, offer a shoulder to cry on and a friend when no one else understands” (Byrne 2/4). Music is made up of multiple instruments that create a harmony and can have an impact on human emotions.

They say music is like an artificial sanctuary that brings out the emotions that a person might be feeling at that time. Music is known to heal the soul when one is down and it can reach out to one. Music speaks volumes as it some genres and styles of music talk about relatable topics that one might be going through or have gone through. Song lyrics are usually written from true stories including: heartbreaks, conversations, or thoughts. Artist are also regular people they just use music to relate to people and tell the people their story and just hopefully one can relate to it and agree.

Having a big following on social media can boost the amount of fans one gets, but those who don’t have the same following and would love to get their music out don’t get the same love. Social media can also take away the creativeness of an artist as one might have hundreds of other upcoming artist that are trying to make music with the same style or flow as one. CD’s and record sales are now longer the top way that artist get their money, they rely on people to stream their music to support them monetarily.

Artists also have to be very careful about how they present themselves on social media and worry about what they post to make sure fans are not given the wrong impression. With the rise of digital music and the impact of social media on the music industry, it may be the end for many record companies if some of them fail to change and adapt to the uses of social media into their business operations. Tracking, following, and promoting music has become so much easier due to social media and if one fails to incorporate this into their business to promote, they just might have a hard time of getting their music out for people to listen to.

Social media, and how it is used is a complicated issue for all. It has provided huge improvements in some areas, but also negative outcomes in other areas. Although, social media’s influence on the music industry has a sort of negative impact of certain artist, it presents a positive outcome for musicians to develop their music and gain exposure. It also promotes positivity for fans to interact with artists and create a sort of feeling that the artist is listening to your thought and suggestions. With the music industry constantly evolving the strategies that companies and artist will use to get their merchandise out to stay relevant will constantly change. Social Media can be a outstanding way for companies to promote the goodness of their artist and build a brand that will last forever.

The Impact of Mass Media on the Music World. (2021, Dec 08). Retrieved from https://studymoose.com/the-impact-of-mass-media-on-the-music-world-essay 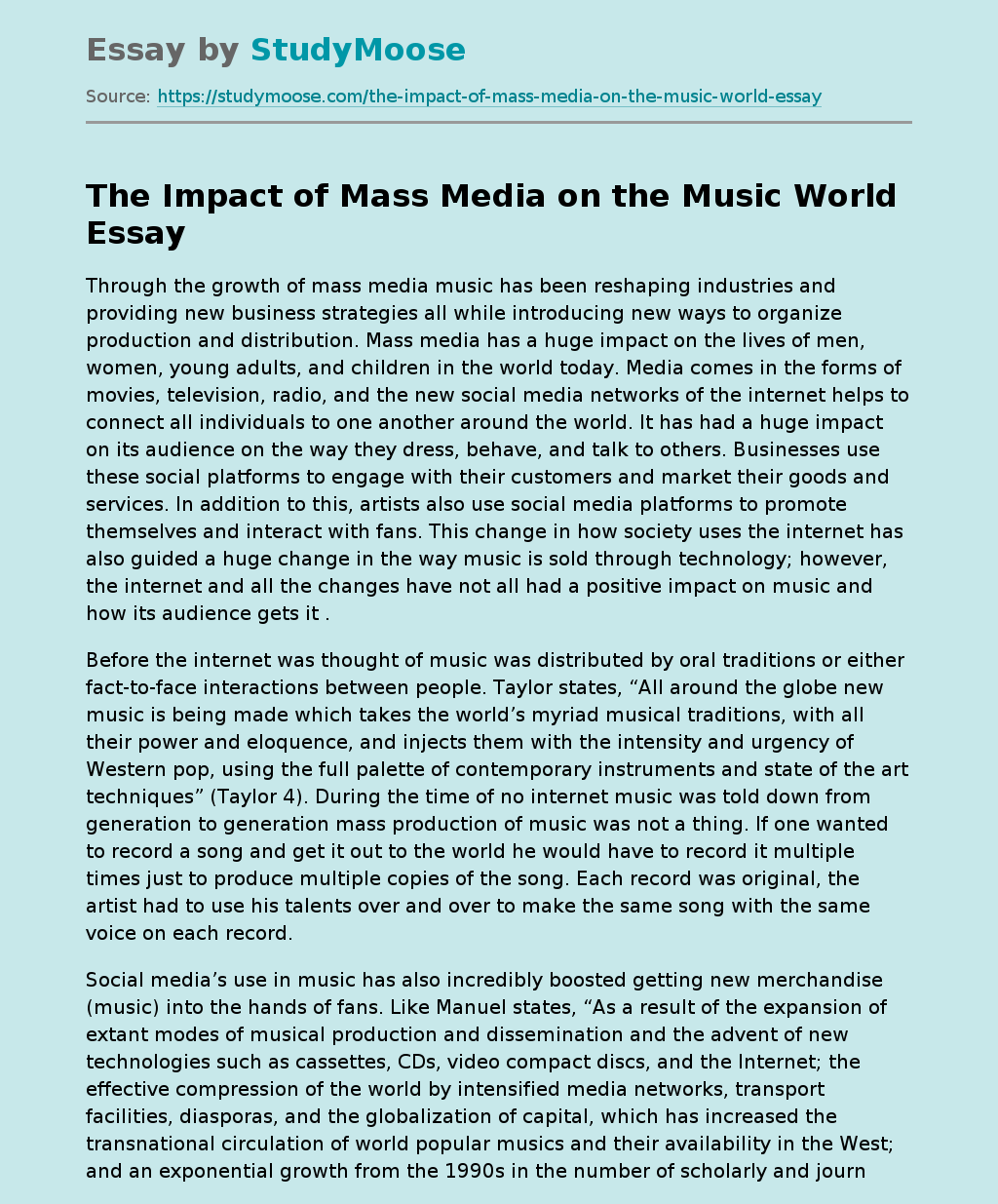