The Impact of Globalization

In today’s modern world we take things for granted, such as the luxury of the Internet and cell phones, or how easy it is to communicate with someone half a globe away. Before 1989, people were confined in their own country and knew only what was going on in their country. Internet, emails, and cell phones were non-existent. Long distance communication was a hassle and obtaining information was not just a simple click away. When the Berlin Wall came down, it marked the official end of the Cold War System.

Don't use plagiarized sources.
Get Your Custom Essay on The Impact of Globalization Just from $13,9/Page

People could start sharing ideas and innovations with the whole world and soon the Cold War system was replaced by the newer, faster, better system called “Globalization.” The new system has revolutionized the way we communicate, do business, and Political changes in our government. Globalization has made the life of the people easier and better then ever before in human history. Business now can do so much more internationally rather than being confined to serve locally.

Globalization is not just another passing trend in the 20th century, it is here to stay and with time, it can only get better.

In Thomas Friedman’s The Lexus and the Olive Tree, he defines globalization: “It is the inexorable of markets, nation-states and technologies to a degree never witnessed before-in a way that is enabling the world to reach into individuals, corporations and nation-states farther, faster, deeper, cheaper, than ever before” (Friedman, 9). The Cold War system is characterized by division, you side either with Russia or the United States. Your economic system is either communism or capitalism. The new international Globalization system is characterized by integration, your success depends on who are you connected to. In the Cold War system the United States and the Soviet Union are always in charge, and in the globalization system the Internet is what everybody is connected. Since no one or two people can fully control the Internet, no one is in charge.

The idea of free-market capitalism is the driving force behind Globalization. Globalization means the spread of free-market capitalism around the world, the more you the free-market rule, the more efficient your economy will be. In order for your country to compete against others, you have to open your country more to free trade and competition. You also have to follow the economic rules that involve opening, deregulating, and privatizing the economy. (Friedman, 9) How globalization affects the political powers of the country is shown through three balances that over overlap with one another. The first is the traditional balance between nation-states, there has to be a stable balance of power between the U.S. and other countries for the globalization system to work.

The second balance in the globalization system is between nation-states and global market. The government needs the support of the global market, because without globalization, it can cause a huge impact on the economy of the country. The third balance is between the nation-states and individuals. Globalization has given individuals more power to influence the markets and nation-states, because they can act directly on the world stage. These individuals can impact the country economically and politically with all the tools from globalization. The globalization system explains everything that is happening today in the world, such as the global integration of technology, finance, trade, and information in a way that is influencing wages, interest rates, living standards, culture, job, opportunities, and wars all over the world. (Friedman, 28) Globalization is influencing more people in more ways at the same time than any other international system has in the past.

I think the globalization system has brought a lot of positives to the people around the world. Economically, the globalization system has increased the international trade between countries faster than before. It promotes more free trade and competition than the Cold War, and countries now can trade with each other without having any restrictions or tariffs, which keeps the prices low for the people. With the increase of foreign direct investment, the people can invest in anything around the world much easier with less risk and huge rewards. Another positive of globalization is that Internet has become a common household luxury for common people, the Internet makes the lives of people easier by obtaining information easier; they can do business online and communicate with people around the world with email. In my opinion, the globalization system enables greater international cultural exchanges between different types of countries.

The people can interact with different cultures outside of their own, get a perspective on how other people live, and be more open to different ideas. Another positive that I think globalization also promotes is more international travel and tourism. In the Cold War people were confined in their country and now, with the globalization, it is encouraged that people travel to other countries to experience the differences from their own country. I think the tourism business has exploded in the last decade due to globalization; people want to travel and visit places that they could never have seen in the Cold War system. Globalization has also increased the global development of telecommunication, new technology, and more accessible flow of data between countries. Technologies such as the Internet, satellites, and cell phones have become an important necessity for people to function at their highest capacity at their jobs or everyday routines.

With all the positives globalization has created, it also has created various negatives for some people around the world. I think with all the new technology invented, globalization has reduced the demand for unskilled labors. Now days people have a harder time finding a decent job with just a high school education. Unskilled laborers are disappearing due to globalization, everything is being specialized, and you have to have a college education in order to find a decent job that can support your family however, not everyone has the money or time to get a college education so it is a dilemma for unskilled people to find a job or go to school. Another negative that I think is caused by globalization is the outsourcing and offshoring of jobs to different country for cheaper labor than in the United States globalization has benefited people in the third world country with all the jobs from the multinational countries, but it affects the people in the U.S. and other developed countries because people in the developed country lose jobs to the cheap labor workers in the third-world countries.

I think the government is the best at reducing the negatives caused by globalization. Government can help the people with no college education by teaching the skills they need to acquire a decent job that can support their family. Government should also regulate how multinational company outsources their jobs to other countries. The first step to make a difference is helping its own people in the U.S. not about making money. Multinational companies needs to stop thinking about making money all the time and start contributing to help the people. If they would outsource the jobs that Americans have to other countries then they should at least teach the workers some new skills for them to get a new job in the globalization system. The government and the companies need to work together to reduce all the negatives caused by the Globalization, because they have to do their part in order for the people to be better off.

The globalization system has changed a lot of what we traditionally do in life to newer, better ways to do things in life. It affects us economically and culturally even though we do not realize it. Today the Internet, cell phones, and email have become essential tools that many people cannot imagine living without. Globalization will benefit anyone who is willing to follow its rule and it is more efficient and more rewarding then any other international system in the past. Globalization has also caused negatives around the world with loss of unskilled labors due to advanced technology and the outsourcing of jobs and the loss of old traditional cultural values. The people around the world think the reward is better then the risk; their drive for better life outweighs the negatives caused by globalization. Globalization is the future, and the future is now.

The Impact of Globalization. (2016, Aug 08). Retrieved from https://studymoose.com/the-impact-of-globalization-2-essay 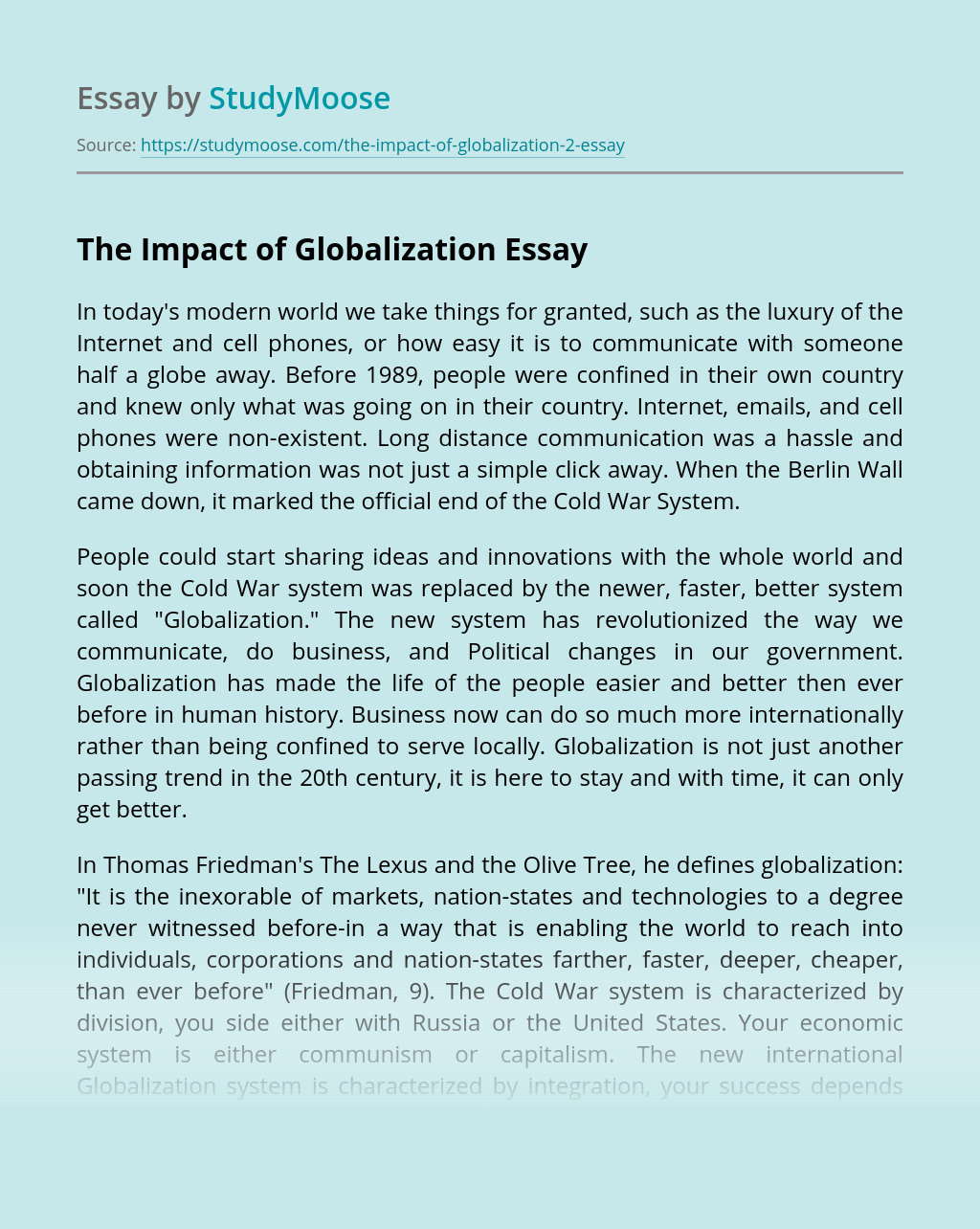 The Functionalist and Marxist views on the Family

Functionalists argue that societies consist of inter-related social institutions such as schools, mass media, political systems, the Church and the family each of which contribute positively to the maintenance of stability of society as a whole. Broadly speaking it is assumed by functionalists that societies operate in the interests of all of their members so...

The Invisible hand is a term created by the renowned economist Adam Smith in his popular book The Wealth of Nations. It means that when individual’s pursue their own self-interest they are led by an invisible hand that promotes the society’s interest more than what they intended. It is an important property of a competitive...

Get Essay
Death of a Salesman Essay

The play ‘Death Of A Salesman’, the brainchild of Arthur Miller was transformed and fitted to the movie screen in the year 1986. The play itself is set in the house of Willy Loman, and tells the melancholy story of a salesman whom is in deep financial trouble, and the only remedy for the situation...

The Effects of Industrialization on U.S. Economy and Society

Australia vs. China: An Economic Comparison

Australia and China adopt very different economic systems in order to cater the best for their society. Nevertheless, Australia’s financial system is more effective than China’s and, due to the writer’s conservative value system, will be measured in terms of ecological effectiveness, labour and entrepreneurial resource effectiveness and the standard of life. The standard financial...