Part One: Chapters 1-2
Standard Focus: The Cast Of Characters

Everdeen Family:
Katniss – Is the girl who cares for her family by hunting as well as emotionally during her mother’s ongoing depression. Primrose – Twelve-year-old sister of Katniss. She is the one person Katniss knows she loves. Rest of Characters:

Gale- Is the best friend and hunting partner of Katniss Everdeen. Peeta Mellark – The boy tribute of District 12.
Haymitch Abernathy – A past winner of the Hunger Games from District 12.

Don't use plagiarized sources. Get your custom essay on
“ The Hunger Games Task Sheet ”
Get custom paper
NEW! smart matching with writer

Has an alcohol issue. Effie Trinket – The Capitol representative from District 12. She is overly happy and chippy. Madge Undersee – The mayor’s daughter. Surprisingly kind to Katniss. Settings:

District 12 – The mining district of the 12 Districts. It is very rough for people to live here due to poorness and barely have enough to feed themselves. The poorest part is the Seam. The Capitol – Is the main city where the Hunger Games are held. It is known for its retrospective lifestyle.

Main Events of Chapter – The Reaping, Katniss’s illegal hunting, The Hob trades, the memory of the death of her father. Characters – Gale, Katniss’s Mother, Katniss, Primrose, Effie Trinket, Haymitch Abernathy. Setting – District 12, Reaping Stage, Katniss’s Home, Forest. Primary Conflict – The Reaping because it outlined the main characters from the others. Thoughts, Feelings or Predictions – I feel Peeta is going to be quiet but nice further on as he is a little bit shy. Thematic issues being raised – Coming of Age, rites of passage, dangers of an oppressive society, inhumanity,
dehumanization

Primary Conflict – The talk on the train because it show how tempered each character can be. Thoughts, Feelings or Predictions – I predict Haymitch might sober up a little bit to help out the state of being a mentor. Thematic Issues being raised – Alcoholism, Rage

Chapter 5
1. The purpose of the Remake Center is to make the tributes feel ‘attractive’ for the high class people of The Capitol 2. Katniss was worrying about what she will be wearing for the opening ceremonies because tributes are dressed up as their Districts and their district is coal, so she thought they might have something nothing more than an eyesore. 3. The costume is so important because it has to be remembered and recognized so that they may receive packages during the Hunger Games from sponsors. 4. Cinna is extremely different to Flavius and Octavia because he doesn’t wear as much make-up and dress himself up flamboyantly. 5. The crowd’s reaction to Peeta and Katniss’s costumes were gob smacked and amazed as they have never seen two tributes on fire before. 6. Katniss means that when she says ‘ two can play at this game’ then kisses Peeta is that she thinks Peeta is trying to over smart Peeta because she thinks he is playing her to deceive but she counteracts by surprising him with a kiss.

Chapter 6
1. The roof is safe for Peeta and Katniss to talk because if they try to escape the Hunger Games by committing suicide by jumping off the roof they would bounce right back off as a result of an invisible wall around the roof. 2. The training center is very different to District 12 because they have everything to cater for your needs but in the Seam you have to forage for your own materials and build your own equipment. 3. Effie Trinket is a person more suited to The Capitol as she dresses up really fluorescently and always has an upbeat tempo. 4. An Avox is a thief whose tongue has been cut off.

5. Katniss knows the Avox from a time in the forest where she and Gale were hunting and the Avox girl was running away from a Capitol hovercraft and she asked Katniss for help but none was given.

Main Events of the Chapter – Training area, Private Sessions with the game makers, the interview, Katniss makes peace with the Avox girl.

Primary Conflict – When Katniss shot the arrow was the primary conflict because it let the Game Makers know that she was here to win and not to be disregarded.

Thoughts, Feeling or Predictions – I feel Peeta exclaiming i=his love for Katniss will anger Katniss and make her feel confused about what to do.

Chapter & Page | Event or Description| What does this tell us about Katniss?| Chapter 1,p. 7| Katniss killed lynx because he scared off game. ‘… he wasn’t bad company. But I got a decent price for his pelt’| It shows that she isn’t afraid to ward off competitors for the benefit of her getting an advantage.| Chapter 1,p. 8| ‘But to be honest, I’m not the forgiving type.’| Katniss isn’t a person to forgive because she has grown untrustworthy from her family problems| Chapter 1,p. 14| ‘But what good is yelling about the Capitol in the middle of the wood? It doesn’t change anything. It doesn’t make things fair.| She feels as though she needs to express her emotions directly to her main problem but not in a subtle way.| Chapter 2,p. 32| ‘I feel like I owe him something, and I hate owing people.’ | Katniss doesn’t like to be in debt to others. She likes her independence.| Chapter 4,p. 49| ‘A kind Peeta Mellark is far more dangerous to me than an unkind one. Kind people have a way of working their way inside me.’| She accepts kind-hearted people more than dangerous people because she misses the caring fell as her father died and her mother is in a deep depression.|

Chapter 4, p. 51| ‘The woods became our savior, and each day I went a bit farther into its arms. It was slow-going at first, but I was determined to feed us.’| She had to overcome her fear of the woods at a young age to feed her starving family.| Chapter 5,p.72| ‘Peeta is planning how to kill you…He is luring you in to make you easy prey.’| She thinks she is aware of everything but doesn’t think that he is just trying to be kind.| Chapter 6,p. 85|

‘That I’m ashamed I never tried to help her in the woods. That I let the Capitol kill the boy and mutilate her without lifting a finger.’ | She thinks she should of helped the girl who got mutilated by the Capitol. She has a good conscience and has a compassion for others.| Chapter 7.p.102| ‘I pull an arrow from my quiver and send it straight at the game makers’ table… Everyone stares at me in disbelief’| She doesn’t believe in the exclusion of the game makers and how they cannot pay attention to the tributes as they are sacrificing their lives, This shows she is short-tempered and rebellious.| Chapter 9,p. 124| ‘I can feel my pulse pounding in my temples. It’s a relief to get my chair, because between the heels and my legs shaking, I’m afraid I’ll trip.’| She is nervous of her surroundings because she is not use to the attention and needs to relax in times of stress.|

Positive Qualities| Negative Qualities|
She looks out for her family:| She is suspicious:|
She is a good hunter| She is stubborn|
She cares for people who care for her| She is untrusting| She’s learnt about edible plants where she help others as well| She is sometimes defeatist| She is resourceful| She has a strong attitude|

She has a survival instinct| She is short-tempered|

1. Katniss was upset by Peeta’s proclamation of love because she thought it made her look weak. 2. Haymitch thinks it is good because it makes her look desirable. 3. Haymitch’s last piece of advice for Peeta and Katniss was ‘Stay Alive.’ 4. Their attitudes towards the arena are thinking on how it is going to change them and how they can stay themselves. 5. A tracker is a device that keeps track of the 24 tributes. 6. The Capitol makes the arenas into an attraction for tourists when the games are over. This shows that they are money-hungry. 7. Katniss’s is a gold Mockingjay pin.

8. I can infer that the girl from District 1 is a dirty fighter as she wanted to cheat by bringing a poison spiked ring. 9. I can relate to Katniss’s anxiety. When it was my first day of Turkish school I started to
feel nervous and didn’t want to go.

Part Two: Chapters 11-12
Note-Taking and Summarizing: Chapters 11-12
Main events of the chapter – Cornucopia’s bloodbath, beginning gong, Screening of the first tribute deaths, Girl who lights a fir gets killed, Peeta’s betrayal , Discovering the pond, Fire wall.
Characters – 24 Tribute, Cinna
Setting – The forest arena, Launch Room
Primary Conflict – Peeta’s betrayal against Katniss as he joins the Career tributes gong.
Thoughts, Feelings or Predictions – I feel Peeta might not have betrayed Katniss but tricking the Careers to get to the end then join with Katniss later on.
Thematic Issues being raised – Paranoia, Sleep Deprivation

Chapter 13
1. The events that happen during the fire:
* Jacket catches on fire
* Katniss starts to feel asphyxiated
* Calf burnt by fireball

2. Katniss’s injuries as a result of the fire:
* Hand burnt
* Hands covered in red welts
* Burnt calf
* Hair singed
3. When Katniss climbs the tree the career start to surround her.

4. The new problem Katniss has while up in the safety of the tree is she has no food or a place to escape and hide.

5. The fire tells us that the audience likes action and danger in the arena.

6. Rue helped Katniss because she feels like she needs a mother-like figure so she helps Katniss to let her know that she wants to be an ally. She might become closer to Katniss further on in the games.

1. The tracker jackers are so dangerous because the can cause hallucinations and in serious cases death.

2. Katniss is a brave person because she starts to cut the branch even though she would get stung and doesn’t give up until she escapes.

3. I think Peeta acts the way he does so she doesn’t get killed as he really does care for her.

4. My theory is the when she killed two tributes and got away shows that she is a worthy adversary for other tributes. She is also a source of entertainment.

5. A bottle of water, another jacket as well as a bow and an arrow would be beneficial for Katniss at this time.

6. I predict Katniss will Hallucinate and faint as a result of the tracker jacker stings. 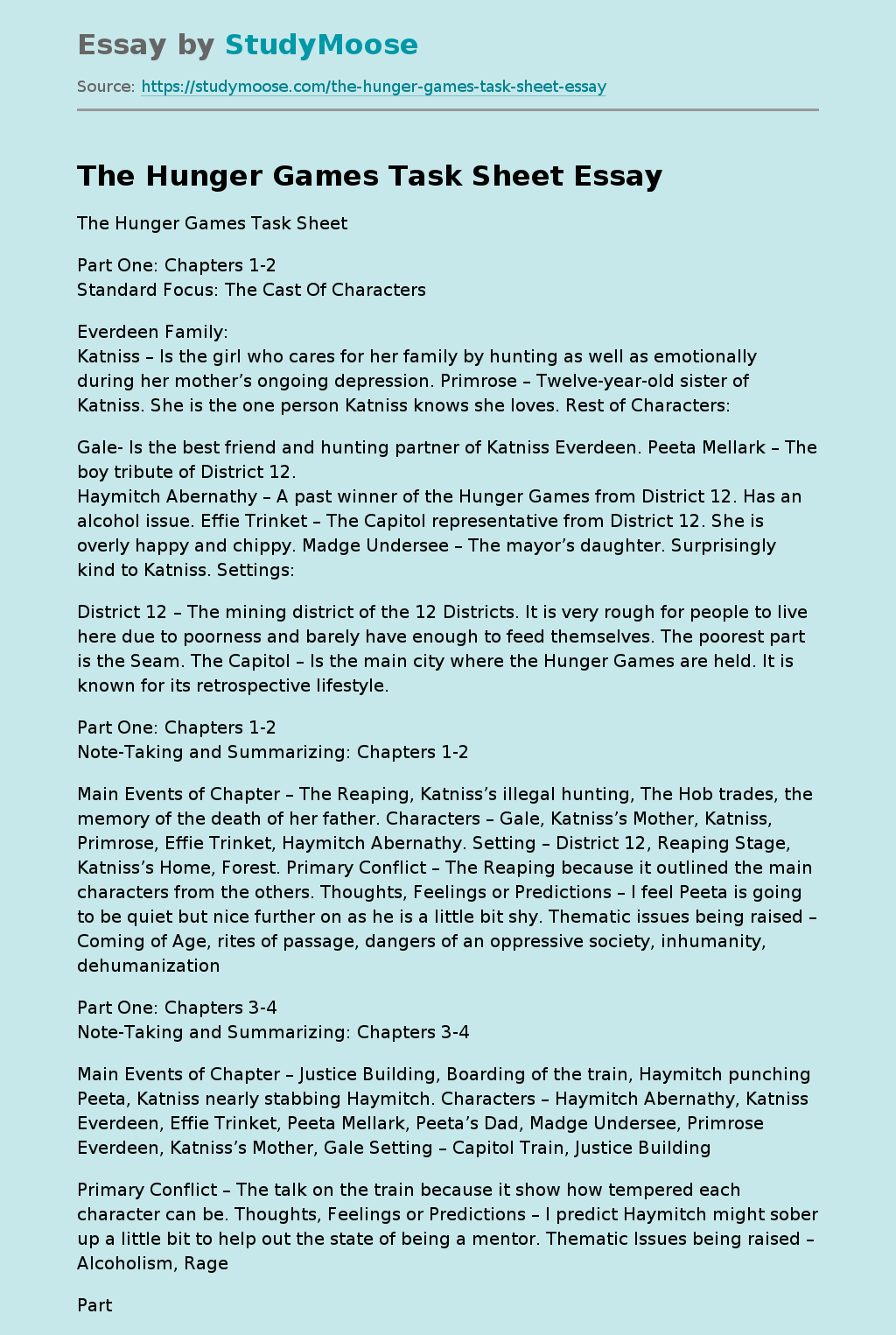