The Human History of Mars

Since the dawn of time, humans viewed the night sky to uncover the mysteries of the universe. They first used simple observations such as sundials, and as time moved on and technology became more refined, telescopes would become the standard tool to create a better detail on the stars and planets until the invention of the rockets, allowing us to venture out into deep space.

Despite technological advances, man’s curiosity of the Red Planet would remain unchanged, being a crucial part to our history and culture.

Don't use plagiarized sources. Get your custom essay on
“ The Human History of Mars ”
Get custom paper
NEW! smart matching with writer

Although it’s unclear as to who discovered Mars, the majority of Historians believe that the Babylonians were the first to study the planet. According to an article published by NASA, the Babylonians studied astronomy as early as 400 B.C , and developed advanced methods for predicting astronomical events such as eclipses (“Early Times”). They called Mars, “Nergal”, the God of Destruction. Later on, the Egyptians would be the first to observe the planet reversing its movement.

Proficient in: Life On Mars

Puzzled by this, they coined it “the Backwards traveler”.

The planet’s motion, and the reddish color of the Martian surface would influence the Romans to first name it “Mars” after their God of War. Despite their achievements, they could only perceive little detail about the planet, as more assistance would be needed to improve their observations. Astronomers later on down the line of history learned to rely on machinery much more powerful than their own eyes, leading to the era of the telescope. In 1609, Johannes Kepler revisited the Egyptian’s observation and became one of the first people to observe the Martian Planet; besides Galileo Galilei.

Kepler made a groundbreaking discovery that all the planets have elliptical orbits, not circular, as many people believed. In 1659, a Dutch Astronomer named Christiaan Huygens observed mars with a telescope he made.

Through this telescope, he detected a dark spot on the surface of the planet while noticing the object moving to its original position in the coming day. With this data, he calculated the rotational period of mars to be 24 hours and 30 minutes, only 7 minutes short of its confirmed time. In 1738, Sir William Herschel examined the ice caps of the Red Planet and confirmed that it has seasons just like earth and theorized that mars could have potential life.

Many astronomers did not believe in Herschel’s theory until 1877 when Giovanni Schiaparelli drew a map of mars and described streaks of “Canali”, for which people would mistake as ‘’Canals,” implying that there’s intelligent life that built a system of canals, which then sparked the coming of a new era of science fiction. Ever since Giovanni’s statement, people all over the world were excited about the possibilities of life on the red planet, and many authors took inspiration from his idea. In 1897, award-winning Arthur H.G Wells wrote “War of the Worlds”. This story tells about the Martian’s plan to invade earth in order gain Earth’s resources.

A silver cylinder meteorite crashes down in England, later the martians caused mass chaos, killing thousands of people, the people become desperate to survive, so they look towards the sewers as their new home, 12 days later after the Martian invasion, the main character would come out of the sewers, later finding out is that all the martians died from a bacterial infection. In the last scene of the novel, it depicts humanity rebuilding itself from the ground up. On October 30th, War of the Worlds was broadcast on the radio, and caused panic throughout New York. According to Paul Raeburns, Mars: Uncovering the Secrets of the Red Planet on page 40.

The New York Times received 875 calls. People were said to be abandoning their homes in panic, and fleeing what they thought was the imminent arrival of interplanetary monsters. (“Wells”). Wells, who was also the person who broadcast it, apologized for the panic throughout the state Despite receiving backlash, it would still inspire many other authors to write novels about mars. In 1950, Ray Bradbury’s “Martian Chronicles” told a collection of short stories told from different perspectives of the martians and the humans. Each of the short stories would provoke a different idea, and would allow the reader to learn more about the characters.

A multitude of sci-fi enthusiast and critics alike praised the Martian Chronicles for having an innovative narrative and was widely considered to be one of the best sci fi books in the world. In 1951, Sri Lankan published “Sands on Mars” According to a website published by Trustees of Dartmouth College in 2001, His book “Sands of Mars” is seen as one of the first realistic novels about the planet (“Mars”).

The Human History of Mars. (2021, Dec 02). Retrieved from http://studymoose.com/the-human-history-of-mars-essay 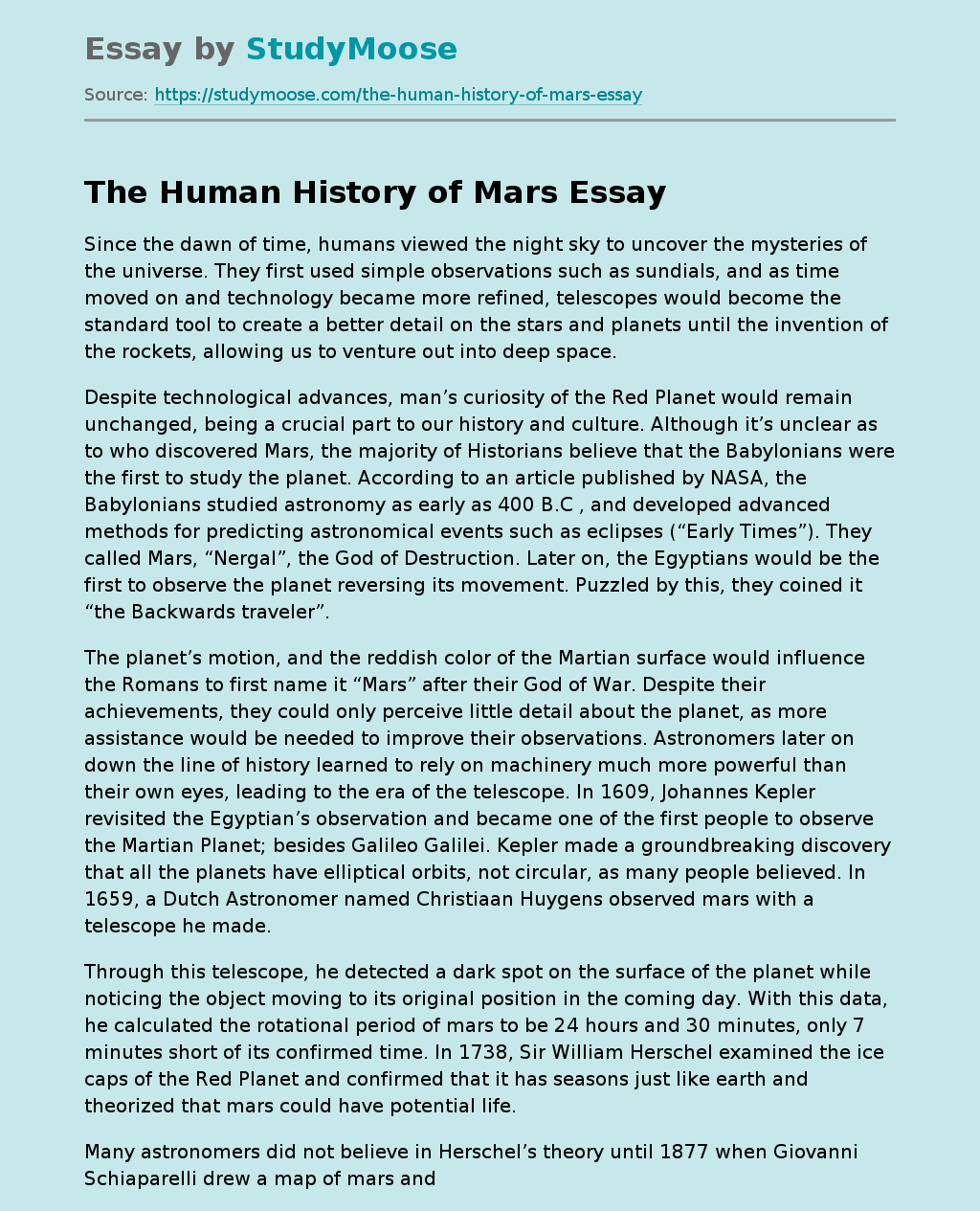