The House Of Bernarda Alba vs A Doll's House

In A Doll’s House, the protagonist of the play, Nora, is definitely treated in the very conservative way that was normal at the time. She is expected by her husband Torvald to just stay at home, take care of the children, and do the housework. He talks to Nora like a little girl, and calls her names such as “squirrelkin”, “silly girl”, and “my little songbird”, which are all very degrading shows how dumb and nai?? ve Torvald thinks she is.

Don't use plagiarized sources. Get your custom essay on
“ The House Of Bernarda Alba vs A Doll’s House ”
Get custom paper
NEW! smart matching with writer

In return, Nora plays along and acts the way Torvald always expects her to act.

Until the end of the play where she leaves him, she acts the way that Torvald wants her to act, and Torvald doesn’t for one second doubt that she is dumb and hopeless with anything but housework. When she leaves him, Nora says to Torvald “I have been performing tricks for you, Torvald. That’s how I’ve survived. You wanted it like that.

You and Papa have done me a great wrong. It’s because of you I’ve made nothing of my life. ” Although Torvald never finds out about it himself, Nora had saved his life by taking up a loan from a bank, and secretly works to repay the loan.

This shows how much Nora has to secretly do and sacrifice for their marriage. Torvald would have never agreed to taking the loan out, and Nora has to be afraid to tell him about it even though it was a selfless act and she only did it to save his life and it didn’t benefit her at all.

The fact that Nora cannot tell Torvald about taking out a loan to save his life also shows how much control over their relationship Torvald has. This evokes a feeling of pity for Nora and a feeling of disgust for Torvald, as Torvald would apparently be angry if he found out that Nora had saved his life without telling him.

Ironically, Torvald says that she wouldn’t understand anything to do with money, while she is repaying her loan without him knowing. In the end it turns out that Torvald grossly underestimated his wife and that she is a lot smarter and better with money than he had assumed. The other two women who appear in A Doll’s House are Mrs. Linde and Nora’s Maid. These two also have disadvantages just because they are women. Nora’s Maid is a poor woman who, in order to support her family, has to work as a maid for Nora and Torvald.

The Maid has children of her own, yet is forced to watch Nora’s children most of the day and barely gets to see her own. Even though she doesn’t get to see her own children often and is very poor, she claims to be perfectly happy with her life, as she says she is just “a poor girl who’s been led astray”. The other example of a woman who has to give up and suffer a lot just because she is a woman in A Doll’s House is Mrs. Linde. Mrs. Linde is deeply in love and happily married to Krogstad, a lawyer with very little money.

Mrs. Linde is forced to leave Krogstad, simply because he does not have enough money, and she has to live by herself and work, until she can find a wealthier man who can support her as well. The fact that although Krogstad and Mrs. Linde fit together perfectly, yet she has to leave him because he does not earn enough money illustrates how men were responsible for the financial support of the family, and it was up to women had to find a man who could support them and possibly their children.

In conclusion, all women in both A Doll’s House and The House Of Bernarda Alba have to suffer and make sacrifices merely because of the fact that they are women. The fact that the sacrifices these characters have to make and the disadvantages they have may point to the fact that Henrik Ibsen and Federico L’Orca are both to an extent critics of their societies, and believed that there should be a certain equality between men and women.

The House Of Bernarda Alba vs A Doll's House. (2020, Jun 02). Retrieved from https://studymoose.com/the-house-of-bernarda-alba-vs-a-dolls-house-essay 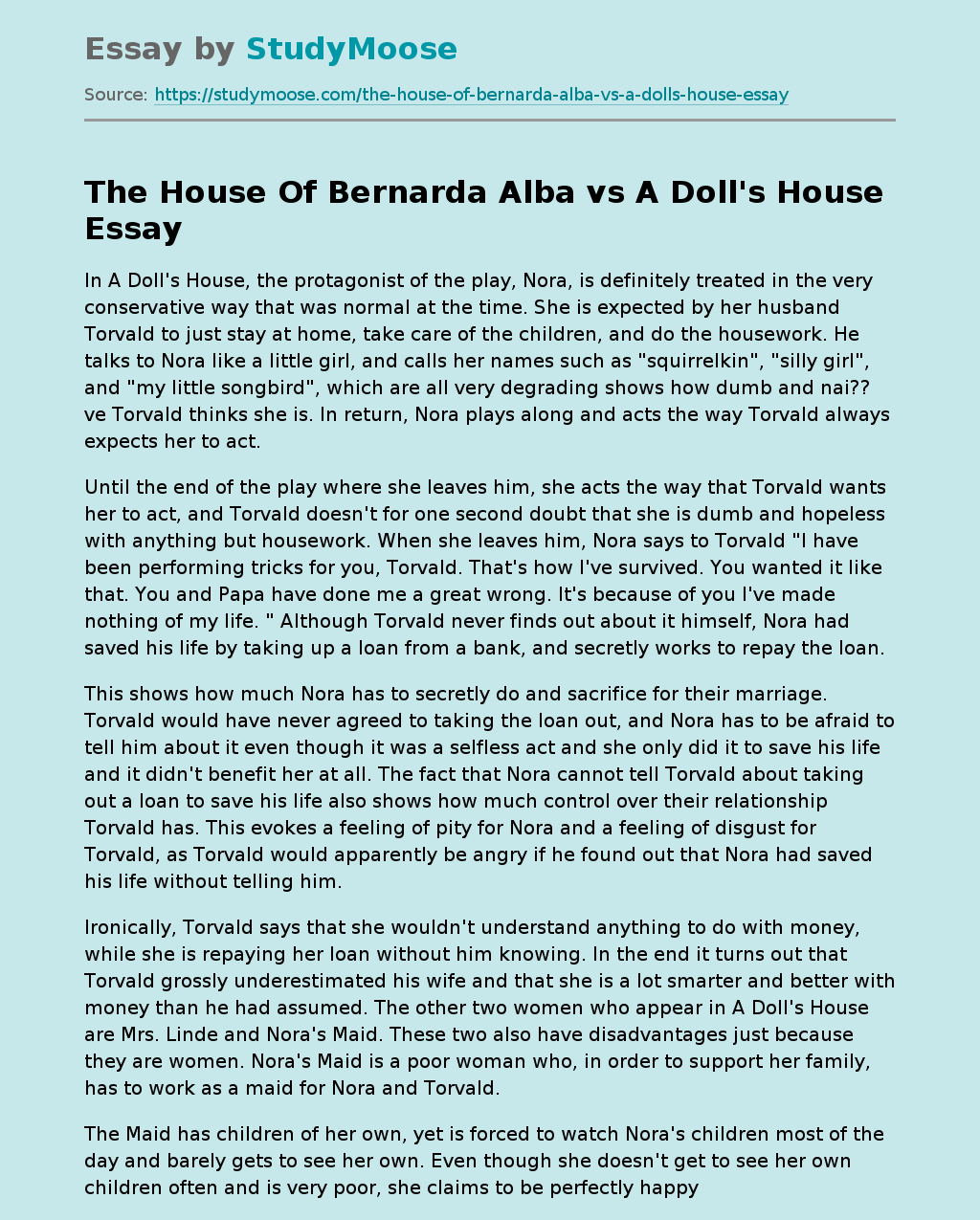