The Hound of the Baskervilles

On this page it describes the almost miraculous transformation between the city and the country. As they watch from the train they see how it affects them. They see that Sir Henry seems to have almost become ignited, with the prospect of going to his family home. (All quotes are in italics) “There he sat, with his tweed suit and his American accent, in the corner of a prosaic railway-carriage, and yet as I looked at his dark and expressive face I felt more than ever how true a descendant he was of that long line of high-blooded, fiery, and masterful men.

Don't use plagiarized sources. Get your custom essay on
“ The Hound of the Baskervilles ”
Get custom paper
NEW! smart matching with writer

There were pride, valour, and strength in his thick brows, his sensitive nostrils, and his large hazel eyes. If on that forbidding moor a difficult and dangerous quest should lie before us, this was at least a comrade for whom one might venture to take a risk with the certainty that he would bravely share it. ”

On this page it also shows that the last time Sir Henry had been to the family home was when he was young so he wouldn’t remember it well and it had been a bad time so he would not wanted to remember it.

“But you were very young when you last saw Baskerville Hall, were you not?”

“I was a boy in my teens at the time of my father’s death and had never seen the Hall, for he lived in a little cottage on the South Coast. Thence I went straight to a friend in America.

I tell you it is all as new to me as it is to Dr. Watson, and I’m as keen as possible to see the moor. ”

Sir Henry had never seen for hall because the last time he was there it was when his father died then he left for America. Setting When they reach Baskerville Hall they reach a creepy setting. The moors are often foggy. The moors seem to be renowned for taking the lives of people.

This sets the background as a cold harsh unforgiving wasteland. The setting around the hall is seen as being dismal and cold it is to set the mood for something that’s wrong with the world. Why this episode is significant This episode is significant because this is where we find out the dark secrets of the Barrymore family. We also meet the characters in this book like Stapleton. We meet all the suspects and Miss Stapleton. Miss Stapleton gives a warning to Watson when she thinks he is Sir Henry. Episode 3 Neither Holmes nor Watson had the power to make an arrest.

So they needed an official, Lestrade was a police detective. Holmes and Watson knew there was going to be trouble so they asked Lestrade to join them. They are hiding outside Merripit house. Merripit house is described as dismal. “My word, it does not seem a very cheerful place,” said the detective with a shiver, glancing round him at the gloomy slopes of the hill and at the huge lake of fog which lay over the Grimpen Mire. “I see the lights of a house ahead of us. ” From the quote above we can see that Grimpen mire is a cold place with fog so dense that it is described as a lake.

The Hound of the Baskervilles. (2017, Oct 12). Retrieved from http://studymoose.com/the-hound-of-the-baskervilles-essay 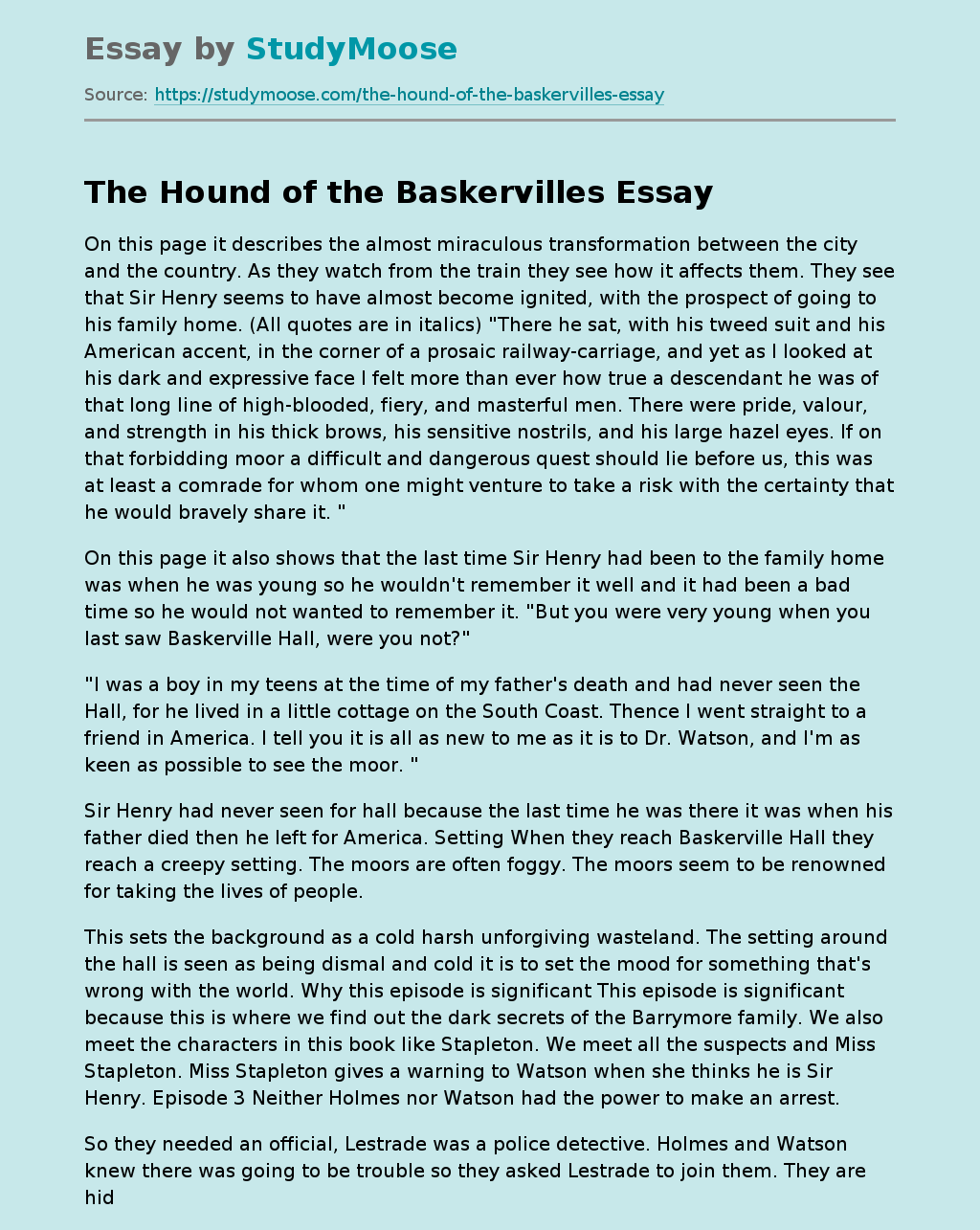