In this case, we will analyse how a hostile takeover creates beneﬁts for both parties. The hostile takover approach can be considered as ”taking over a company with a hostile manner” but with the oﬀers and deals, it becomes a solution to many diﬀerent structures within the company. The decisionmaking through a case as this requires experienced, rational management skills to take the right position with a right choice. The one of the world’s biggest packed food company, Kraft Foods Inc.

Turn in your highest-quality paper
Get a qualified writer to help you with
“ The Hostile Takover Approach ”
Get high-quality paper
NEW! AI matching with writer

has so many innovations and mergers on the same sector. Kraft has been started to work on the cheese sector and generated many enterpreneurships of their own sector. This shows us how Kraft is a proﬁtable company and their management tries to stimulate the market share of the company which is reaching the top. Also they are considered that one of the biggest prime company in the world. Mostly, the products of Kraft are based on packed food.

Their well-known brands are: Cracker Barrel Natural Cheese, Miracle Whip salad dressing, Velveeta process Cheese, Breyers, Philadelphia Cream Cheese, Parkay and numerous others. While the food industry is on its way to the rise, Kraft generated a power in the institutional food market and create a value on manifacturind and marketing. They also created a strategy to diversify the ﬁrms and sectors related food market into the core business line such as dairy foods, snack foods and convenience foods and beverages. Kraft was successful in their industry and has acquired many ﬁrms which are in the similar business line like international, domestic and consumer food.

However Kraft has decided to make an acquisiton with an ﬁrm which has unrelated products.

They merged with Dart Industries which is founder of Duracell Batteries brand in 1980. Kraft and subsidiaries of Dart operated independently. Perhaps, it would not bring a success for their ideally survival. That company established in 1902. Preliminary carees of Justin Dart has been in the retail drug business and he has generated one of the largest drugstore in his domestic area. He has made some diversiﬁcations and changed name to Dart industry due to acquisitions. Dart industry is perfect ﬁt for diversiﬁcation plans of John Richman. Unfortunately, it has not been as Richman’s plans. Probably, it was Richman’s failure and unforeseeable.

John Richman has claimed that long-term investment and short-term returns has been bringing a signiﬁcant value to the Kraft. They have been trying to growing up in the long-term. Therefore they have been sacriﬁcing their short-term proﬁt to make long-term investments. On the other hand, the company was being evaluated wrongly by the stock exchange. As we see in Exhibit 2, long-term debt has a dramatically increase between 1986-87 years. Long-term debt has an increased value from $237,7 millions to $895.3 millions. The reason why Philip Morris is willing to takeover Kraft Inc. lies beneath diversiﬁcation concept. Kraft is a perfect ﬁt for Philip Morris in their opinion. As we said above, Kraft was a major power in their track. The best management team was belong to Kraft and Philip Morris was not adequate to run together with its own General Foods subsidiary. Shortly, General Food was in need of qualiﬁed management.

Before negotiations, Kraft has really eﬃcient growth rate and investments. Furthermore, Kraft has been containing many well-known brand regarding commercial, international and customer food and of course was a major participant in international markets. General Food might have beneﬁted from opportunities of Kraft and strenghtened. In Exhibit 3, International food sales are shown as $1.172,7 millions in 1983 and $2.334.8 millions in 1987. This growth is 16% roughly. And it included 18% of total sales. We assumed that the volatility of percentage changes of the international food sales is the highest. Philip Morris is a conglomerate and this merge is in type of conglomerate merge. PM generated its sales and proﬁts from its own business segment, that is, tobacco segment. One of the reasons of acquisitions is declines in tobacco consumptions.

To create an suﬃcient market share in the sector, PM had had to make some acquisitions. In those years, the reasonable one was to buyout some ﬁrms in the food and brewery industry and according to our visual, these sectors are good choices. Because these sectors was vital and bubils of the market. In that period, Grand Metropolitan bid for Pillsburry. All these merges had been increasing the net earnings and book value of common stocks. PM had had to consent higher price but according to our vision this merge is beneﬁcial for both of them as done for other ﬁrms. Miller Brewery Company and General Food has brougth a success to PM but not so much. Kraft was an all food business and they had completed divestiture of Duracell. Nominately, They was doing their best. Meanwhile, PM is strategically successful by decision of acquisition of Kraft. Bid for Kraft was almost more than 73 times Kraft’s book value of the common stocks.

After the negotiation period, Philip Morris and Kraft negotiated with an agreed price nominated in $106/sh. In our opinions, this acquisition was a well-process. Because the beneﬁts which we will discuss in the conclusion section, from this merger is bigger than the losses. After merger if we look to the behavior of the market, the inverstors acted diﬀerently. Basically, merger process is a correlation between market reaction to the merger anouncement and the current market conditions. Some observations indicate that merger market has given a good sign. That is to say that, positive reaction occurs. But anyway, this is related to investor insight. Common belief about the mergers and acquisitions is that enforcement of businesses by making their operations more synergetic.

Buyers and sellers expect to beneﬁt as a result of acquisiton and merger; otherwise they usually don’t see any reason for merger. These anouncements immediately aﬀect the target company’s prices. In a hostile takeover, abnormal returns are more than in a friendly merger. Hostile transaction which is the price oﬀered by the acquirer is certainly higher than existing price of target ﬁrm in the market. As our example, hostile takeovers are generally made in cash. Thereby, abnormal return is most likely generated. As we see in our case in Exhibit 13, market price of Kraft’s shares increased up to $88.250 from $60.125 with the bid for them.

After that, with the response of Kraft, the shares rose to $102/sh. Only in one month, with the bids and anouncement, investor perceptions about hostile takeover or the mergers ﬁtted with observations. There was no same reaction for Philip Morris . Shares of PM decreased to $95.500 from $100 with the bid anouncement for Kraft and continued like that. Philip Morris and Kraft negotiated with an agreed price nominated in $106/sh. In our opinions, this acquisition was a well-process. Companies (acquirer and target) usually expect synergy from the occured merger. Synergy is potential additional value which exists with combining two ﬁrms. That is in order to create economy of scale and higher growth, get the eﬃcient market share and to become more cost-eﬃcient and proﬁtable. Alternatively, a ﬁrm that is able to increase its depreciation charges after an acquisition will save in taxes and increase its value. So, according to our case, this acquisition can be generate a synergy.

In our calculations, Cash ﬂows and cash ﬂows from tax shield is necessary to create a value in terms of acquisition of Kraft. Through this merger, both PM and Kraft can beneﬁt with their assets, long and short term investments, plus the diversiﬁcation of their debts. As we said before, mergers and acquisitions were common intensively in those years. Philip Morris has wanted to improve and growth up the General Foods proﬁtability and they have needed to new enterprises like an acquisition of a new ﬁrm or developing other strategies. Need of major resources and improving resource capability of the ﬁrm are necessarily important. Philip Morris had has basically two major problems. First one is to make diversiﬁcation; cigarette operations have not appealed to future structure.

From those years to now on, people have a conscious in terms of consuming of cigarette. For this reason, industry will decline on L/T. Second one is legislation. Regulations have restriction for international and domestic markets and so they had had to diversify to another popular industry. They want to become more than a cigarette manufacturer. In these circumstances Philip Morris should buy Kraft due to the advantages of Kraft. Kraft Inc. claims that there will be a huge amount of growth because of merger and they try to realize what the actual market value and what the merged market value will be. So they prepare restructuring plans to see the horizon clearly. Restructuring plan is a method of corporate management.

It is necessary when the company needs to improve the ﬁrm’s eﬃciency and to increase cash ﬂow and proﬁtability. After the acquisition signal and the under the process of takeover, the ﬁrms usually do it. The restructuring is defensive and it arises from market control through threat. This situation indicates that; John Richman has tried to be bought out the company with a high price. Kraft has agreed with Goldman Sachs and gone to restructuring process. This process and recapitalization provide a higher price that is proposed by Phillip Morris. It is in a favor of shareholders and this method creates shareholder value and the reputation to the ﬁrm’s management skills. In doing so, Kraft has provided a really big market value more than they have.

The board decision was ; “maximize the shareholder value rather than accept an inadequate oﬀer.” Kraft rejected Philip Morris’ $11.8-billion cash takeover oﬀer by declaring ”inadequate.” This behavior also creates a positive speculation in the investors common sense. Kraft proposed a $13.2-billion restructuring that would pay shareholders at least $110 per share. That is, $84 a share in cash, $14 a share in junk bonds and the remaining value is regarding post restructuring stock is $12 a share. This means they have almost accomplished with bid of Phillip Morris that is at $106 a share. The shareholders’ dividend gain 1 is increased from the ”Tender Oﬀer” $90 a share to $106, plus Philip Morris agreed to pay dividend at $84 a share.

We had an overall view of this hostile takeover that implied both beneﬁts and costs for both ﬁrm. Kraft used its position to distribute the gains of merger to shareholders and to reﬁnance their most risky debts. To clear these liabilities stimulates their cash gain, the potential growth with the eﬀects of synergy. Also the ownership of the liabilities are distributed to the acquirer as another cost of their hostile manner. But the most eﬃcient part of this merger is to use the synergy eﬀect on the risk reducing. Of course the responsibility of the management increases with managing both Kraft and General Foods. John Richman can not be considered as a ”failure” but may be his decision was too rapid. The attractive free cash ﬂow increase and the easy ﬁnanced debts may charmed him but of course in a hostile takeover situation, you won’t have many choices. So he made the best decision under these circumstances. 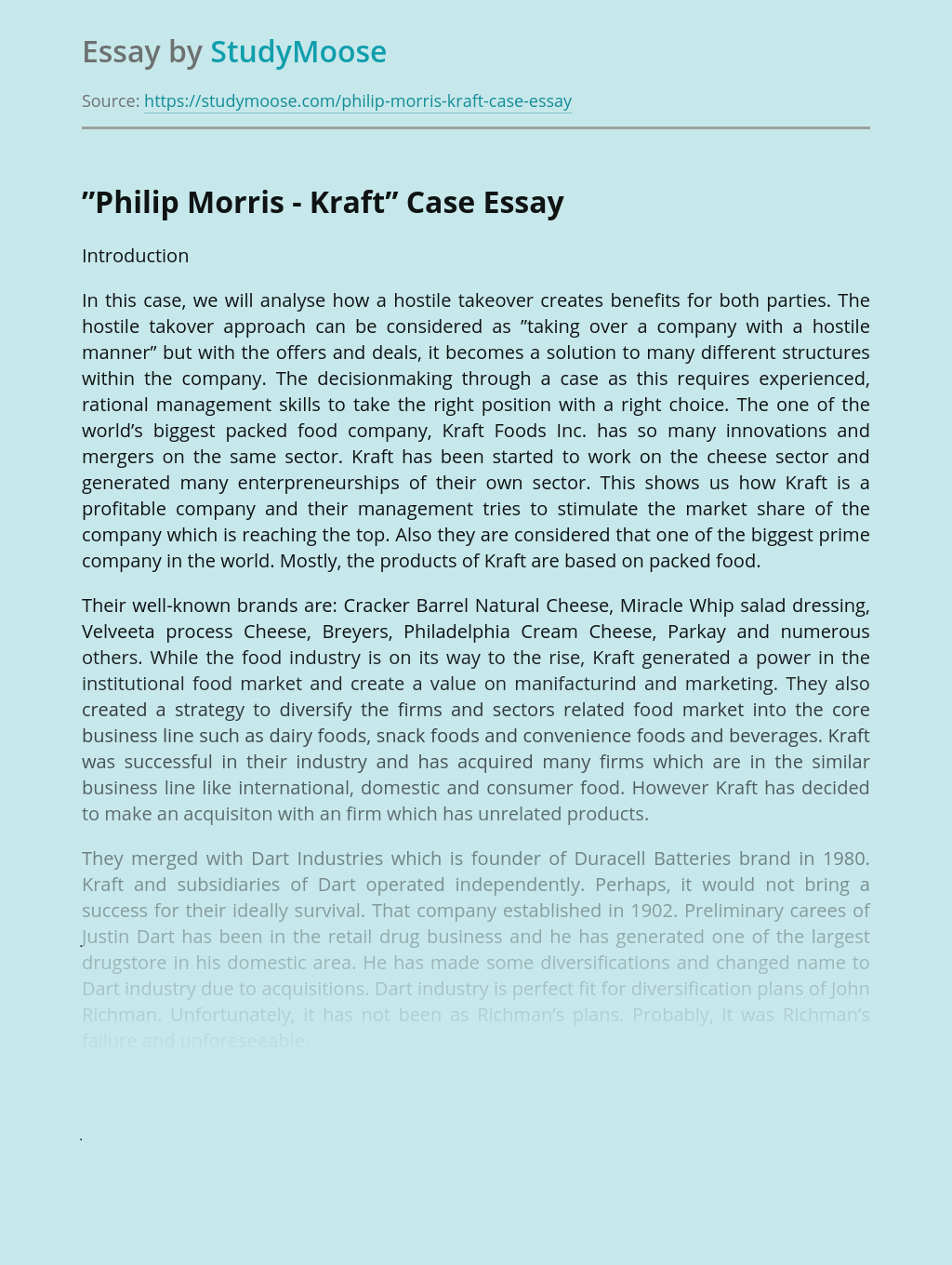 Turn in your highest-quality paper
Get a qualified writer to help you with
“ The Hostile Takover Approach ”
Get high-quality paper
Helping students since 2015
Stay Safe, Stay Original